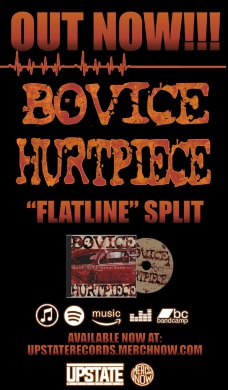 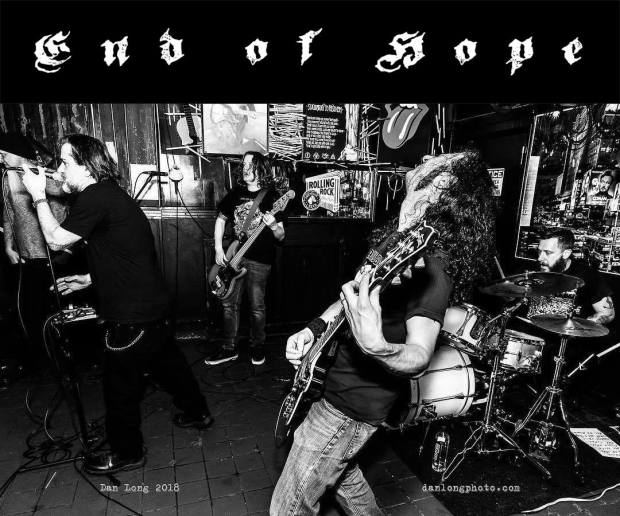 End Of Hope is an eclectic mix of seasoned NYC musicians who got their start a little over a year ago. Their members include Ken Wohlrob on guitar, Davis Schlechter on bass and Dave Richman on the drums. On the mic is Davey Gunner from NYHC pioneers Kraut to round things out. They put out a 2 song demo in March of 2018 and are set to drop a debut full length in the coming months. "Loud, heavy and fast" is their self-description and sums up what is coming out of their speakers. I liked their demo but was really blown away by their set out on Long Island on February 9th where this interview took place. A rented minivan provided heat and a quiet place on a frigid night outside of Mr Beery's in Bethpage where Ken and Davey provided some insight to this up and coming new band. Live photos by: Dan Long. Graphics by: Bas Spierings.

IE: For people who do not know about End Of Hope just yet can you give us some background to the band in regards to when you guys got started and what you have put out to this point?

Ken: It starts with this guy, Gunner and his career going all the way back to the Kraut days. He has the most hardcore punk pedigree in the band. The rest of us all are in our own bands in Brooklyn and around New York City. I play in a band called Eternal Black which is a doom band. Our bass player Davis plays in a great band called Reign Of Zaius… an ape rock band, and our drummer Dave Richman has his own project called St. Bastard. We all are kind of the main guys in our own bands but we all played shows together and we all knew one another and Gunner would always tell me if I ever wanted to do something that he would be interested in singing,. I sort of hit on the idea of wanting to do something that was like Motorhead meets Black Flag. We have been together just over a year and we have put out a 2 song demo. We have a full length album already recorded that we are waiting to mix and that’s about it. It should be out this spring. We recorded in the fall and we have been hard charging ever since. As soon as I knew everyone was in I started writing songs and within 2 and a half months we had 9 songs written.

IE: You mentioned wanting to go in a direction of Motorhead meets Black Flag with this band and I can definitely hear that in some of the songs.

Ken: There is some Fu Manchu in there as well. They are interesting because even though they are a stoner rock band they are kind of a punk band, just sort of slowed down a little bit. The riffs that I was writing and bringing to the band were written to fit Gunner. I wrote where I thought he would have a comfortable space and where he could take it and run with it. With certain bands you bring music in and that song ends up being exactly how you bring it in. With this band there is a lot of editing with the 4 of us. Dave our drummer is a fucking animal. The last song we played tonight, that drum part? Yeah, I brought that song in but that whole drum part and what he does there? He makes it his own .I think what we are going for and what we are really trying to do is to attack and use volume as a weapon. We want to be a loud as hell band that goes out and attacks people and that is what Motorhead did, that’s what Black Flag did. There is a common sensibility between those two bands that we are really going for.

IE: Can you talk about the new album that you are putting out?

Ken: We should have it out late spring/early summer. It will have 9 songs, all of which you heard tonight. It will have the 2 demo songs included in those 9. Gunner can talk about the song titles and what is in the songs lyrically.

Davey: For me personally everything that I write is 100% real. It comes from the heart and is stuff that affects me in my life. These guys are pro musicians. They write music that is so inspiring to me that when I hear it I think to myself “I got this”. I write a lot of lyrics. I am a man of lyrics and words. One of the songs is called “Hypocrisy” which we wrote a few months ago. It is about the political environment that is out there. People tend to have opinions about other people, they often jump the gun, and they really shouldn’t speak. They are humans and they are faulted. For another human being to judge another is completely hypocritical. I find it fascinating because you do not know what that other human being has done in their life. I do not judge anybody. We have another one called “The Hardest Thing”. I had a family member call me a conspiracy theorist because I dare to think outside the box. It hurt me. It broke my heart so I wrote this song. The hardest thing to realize is that my reality is shot, betrayal so deep it’s hard to digest, deception so open we’ll have to adjust, but the fix is in and I won’t give up.

Davey: That is my situation. I cannot have conversations with my family. Everyone has a different opinion but at the end of the day if I can convey the point to everybody that we are on the same side. It doesn’t make a difference if it is red or blue, it’s all overdue, with blue or red, either way we’re dead. It makes no difference, it’s all fucking lies, it’s been all planned out, way before the spies… and that is part of one of the songs we have. “End Of Hope” is another song we have… it is so hard to survive, we call this being alive? There is so much divide, now we are just choosing sides. It’s time to wake the fuck up, the world design is corrupt, it’s there for you and I to see, that’s why they invented TV… to distract us, so both of us can fight and they can win. Divide and conquer. It is a weird thing how so many people don’t get along and they don’t even really see it.

Ken: In my other band I write all my own lyrics. Working with him is the first time that I am working with someone that is just a singer. He is amazing because he almost has this log of lyrics. If we are playing something for the first time he will have something for almost any kind of song. With that song we had it locked in within the first couple of tries. His phone is full of lyrics.

Davey: In the old days I would carry a piece of paper with me and a pen. I could never ready anything though the next day because my handwriting is so horrible. I have sat in a bar and an idea comes to me and I just write it down into my phone now. It could be just one line but then it grows from there. 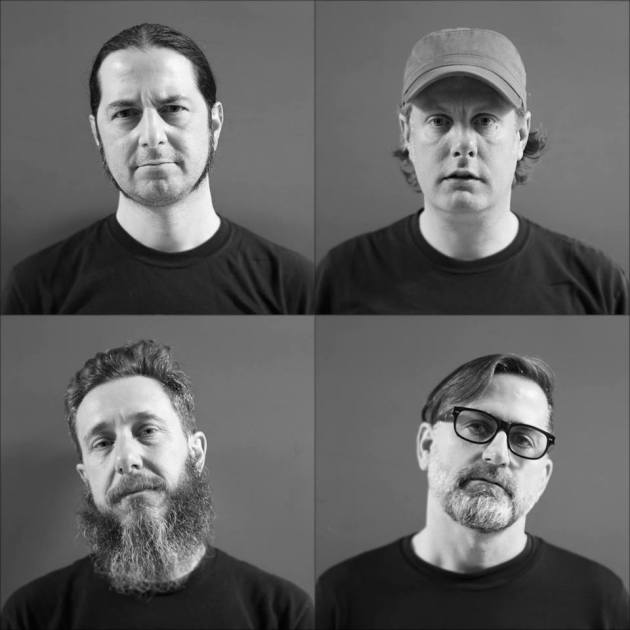 IE: Davey, you have been doing this music thing now for a very long time. You told me earlier that you are 50 years old in fact and I am guessing you were in your teens when you were doing Kraut. If someone told you in your younger years that you would still be at it, doing this kind of music, underground heavy music all these years later… what do you think you would have said to them?

Davey: I would have told them to make sure to have a camera. It is one of my biggest regrets. I played with so many great bands. I played with the Minutemen, Red Cross, The Dead Kennedys, The Clash, Steve Jones and The Sex Pistols, Husker Du, The Misfits… I can go on but I don’t have any photos because I didn’t have a camera.

IE: What still gets you motivated with playing in bands and making music?

Davey: Pete Rose said something once that was really prevalent and that was “Once you lose the desire, you lose everything”. He played baseball and I think he was the best. You need to strive to be the best. I have the desire to play music. I want to be here tonight. I want to play. I want you to hear what I have to say. If I ever lose that desire I won’t play anymore. I think that’s what it is. When I am up there and I see you and I express those lyrics… that is everything to me. We practice a lot. You know what we did before we came here tonight? We met in Brooklyn at 5 o’clock and practiced because we wanted to be good tonight. It means something to us, it is important.

CLICK BELOW TO WATCH A LIVE CLIP OF END OF HOPE PERFORMING "LAST NIGHT" FROM THEIR FEBRUARY 9TH SHOW AT MR. BEERY'S ON LONG ISLAND 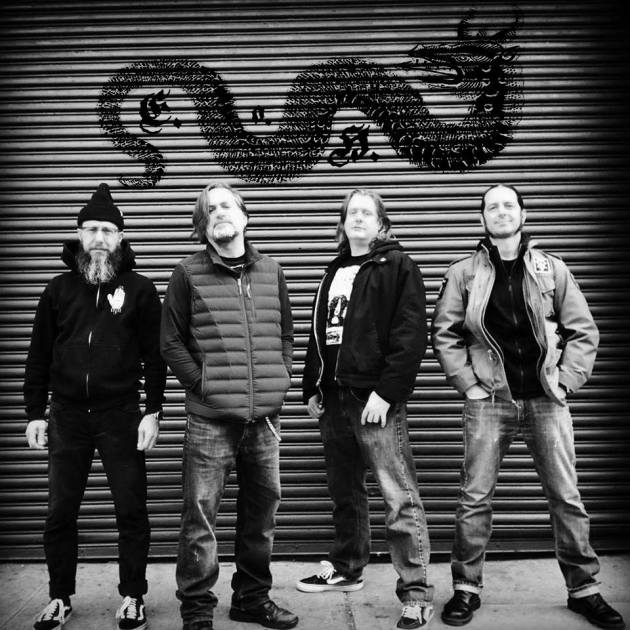 IE: The demo you put out last year came out only digitally. No physical copies at all. What are the plans for the new record? Are you trying to hook up with a label or do you already have one to put the new material out on vinyl, or CD?

Ken: We will throw it to a couple of people and see what they think. With my other band I have been able to do stuff without a label and be really successful at it. We will put it out one way or another. You can actually do it pretty economically these days and if you are smart about it you don’t blow your entire savings on doing it. The most important thing for us is to keep playing live. Every time we play a place we win some more folks over. Were just trying to treat it like a big oil spill that’s just kind of spreading out and trying to get to as many places as we can and not make it just a New York City thing.

IE: After the record comes out what are the plans for the rest of 2019?

Ken: A shit ton of more playing. Possibly try to get to the West Coast, hopefully work our way up and down the East Coast. Were only going to do well if we are out there playing for folks. In this day and age it is really tough to move an album when folks are just streaming stuff.