MARC AND M.A.D. TOURBOOKING CONTNUE TO BE A MAJOR FORCE BEHIND EUROPEAN TOURING AND FESTIVALS DECADES AFTER GETTING THEIR START. WE CAUGHT UP WITH MARC MAD TO FIND OUT WHAT IT TAKES TO KEEP SUCH A LONG RUNNING VENTURE GOING IN THIS NEW INTERVIEW 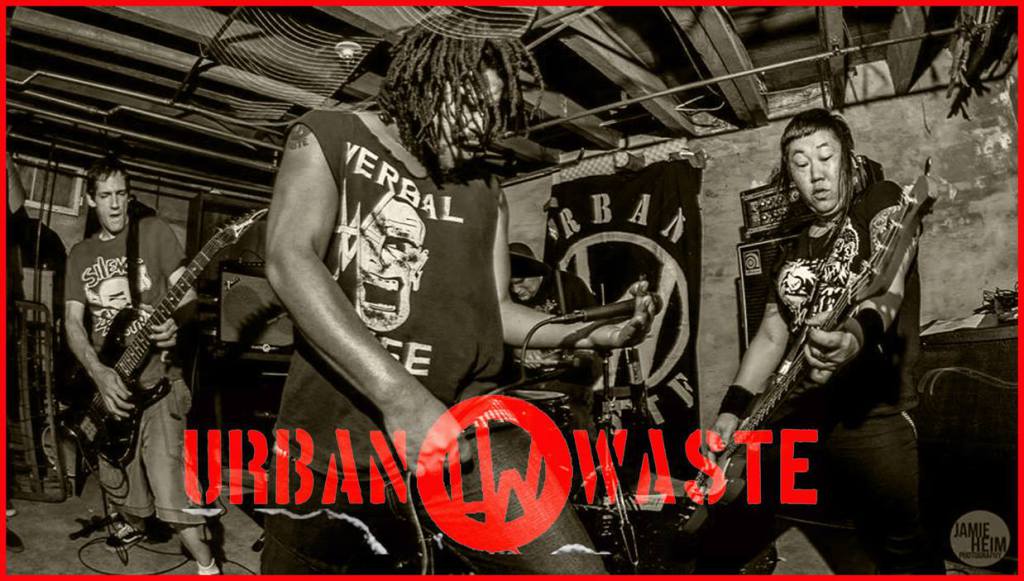 WITH 5 BRAND NEW RELEASES ALL RELEASED THIS WEEK

CLICK AD FOR FREE BANDCAMP DOWNLOADS. ALL AVAILABLE ON CASSETTE IN NOVEMBER 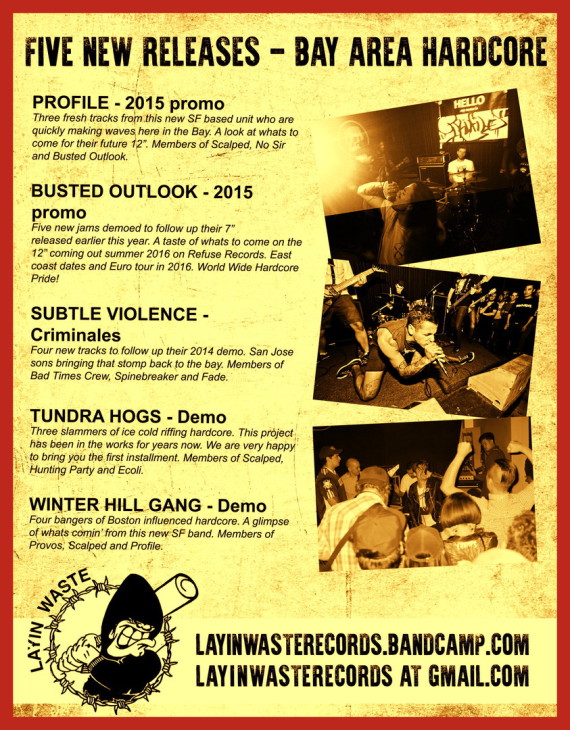 SHOTGUN THROUGH RURAL WYOMING IN THIS NEW INTERVIEW 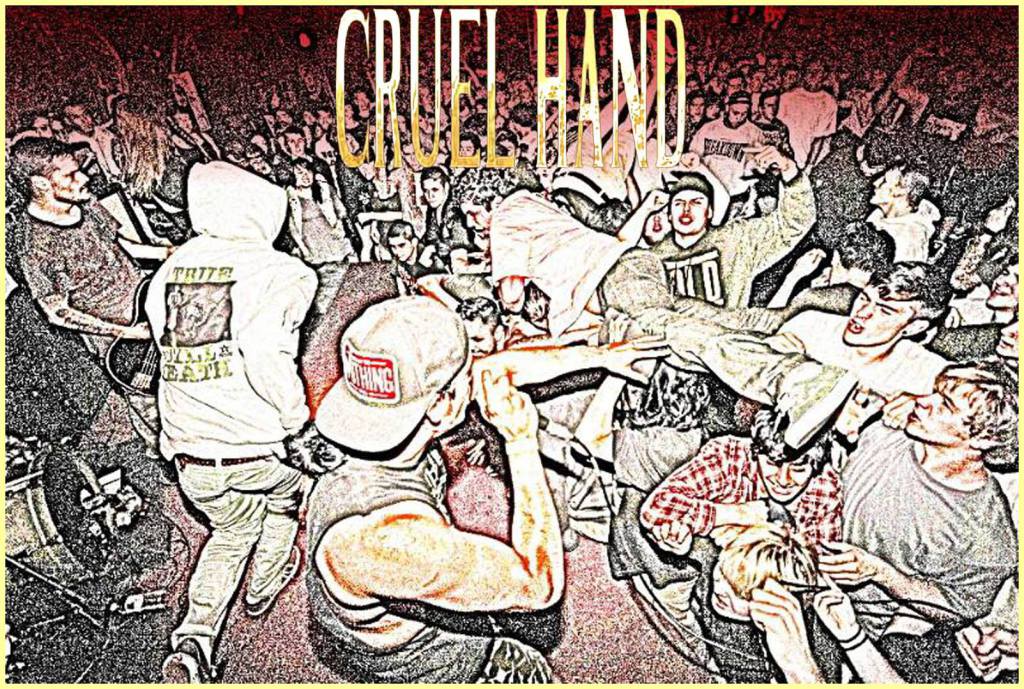 IN EFFECT'S FRESH BLOOD PAGE UPDATED WITH A LOOK AT CASTOFF FROM SAN DIEGO, CA 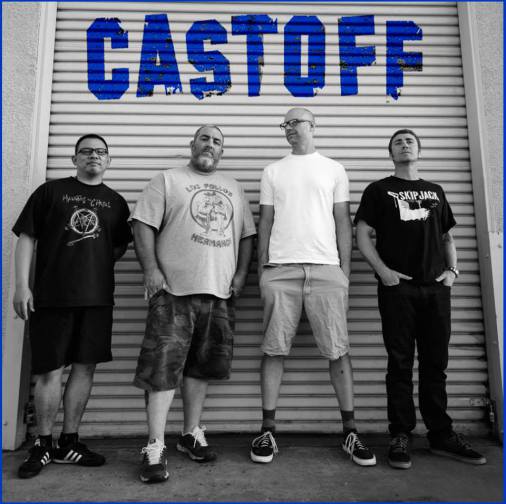 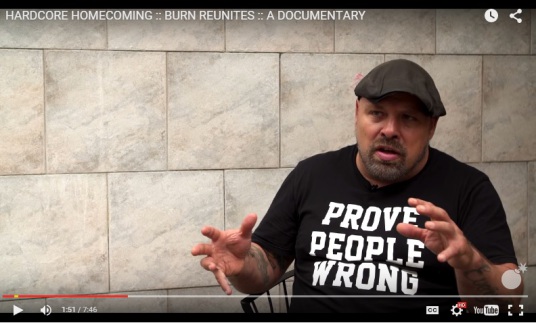 Check out this cool 7 plus minute interview by The Hundreds with Gavin Van Vlack and Chaka Malik of Burn. The Hundreds will soon announce a special project with Burn as well, coinciding with their upcoming West Coast run which starts on October 9th in Santa Ana, CA. Burn will be at London’s The Dome on October 4th for their first European appearance the week before. Video run time is 7:47. Click image above to watch. 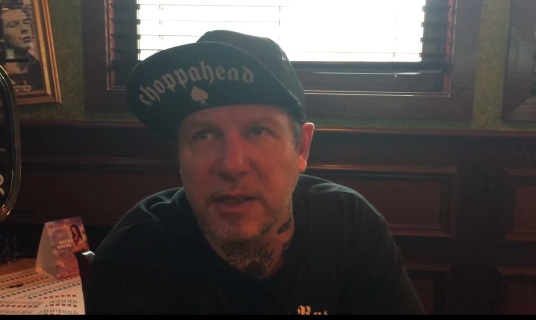 Agnostic Front kicks off a 22 show/26 day European tour with The Old Firm Casuals and Coldside next Wednesday September 30th. Nuclear Blast has a short 2 minute video interview with AF frontman Roger Miret which you can check out by clicking the image above.

FEATURES: BIOHAZARD, SICK OF IT ALL, JUDGE, SLAPSHOT, ALL OUT WAR, AND MANY MORE! 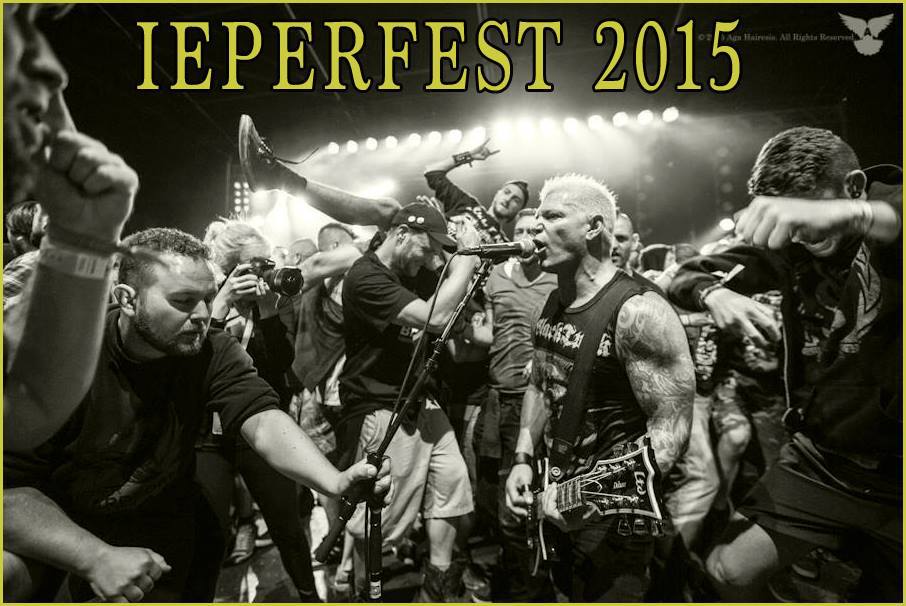 DUE OUT ON REVELATION RECORDS SEPTEMBER 28TH... CLICK FOR MORE INFO 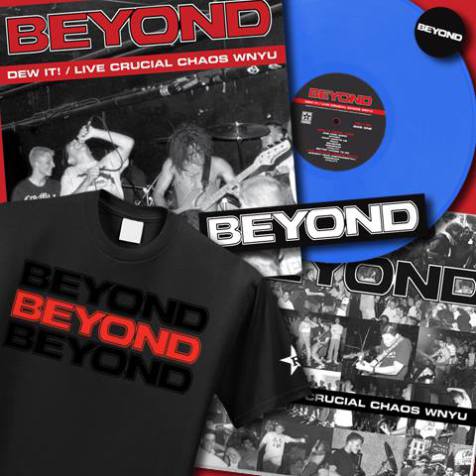 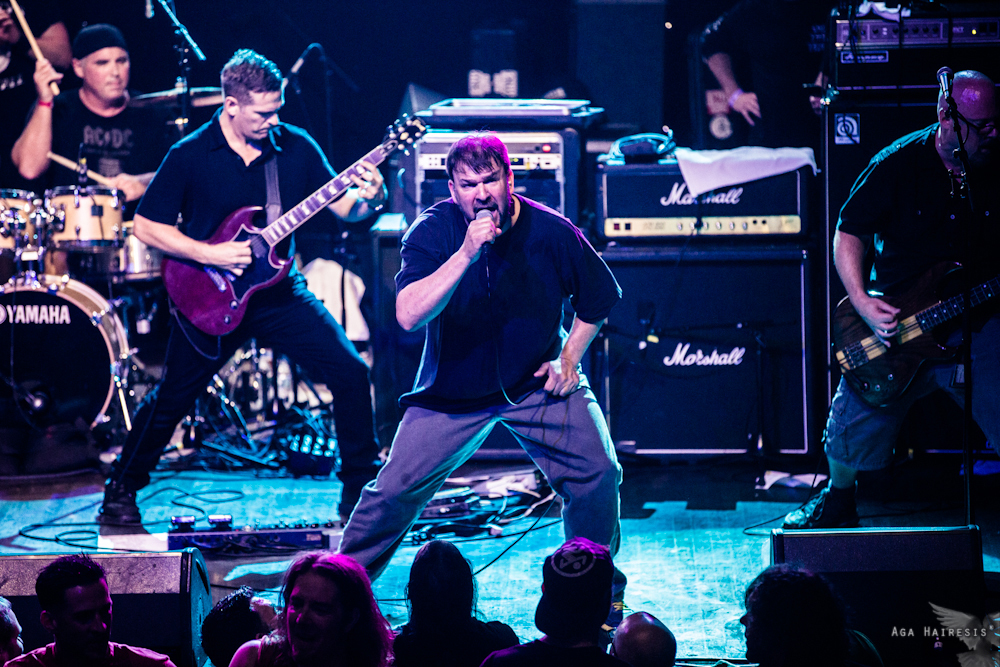 Crumbsuckers at the 2015 BNB Bowl in NYC. Photo by: Aga Hairesis

The Crumbsuckers have announced that their shows scheduled for the weekend of October 16th (Poughkepsie, NY and Patchogue, Long Island) have been cancelled. The band made their return to the stage at this year’s BNB Bowl/NYC in May after being away since 2006. Below is the statement they gave on their Facebook although there was no mention if this is the end of the current re-union or just a cancellation of the October shows.

To all of our fans,

Crumbsuckers regret to announce that our shows scheduled for October 2015 have been canceled. Tickets can be refunded from place of purchase. For Black-n-Blue Bowl 2015 we feel we delivered our A game. It took a lot of work and dedication, and we are all very proud of that performance. But it’s tough on these old souls…

We had a great time reconnecting with old friends and turning on some new fans to the Crumbsuckers sound. Without you, the fans, it never would have been possible. Thank you all for being a part of it.

Live in your life of dreams… 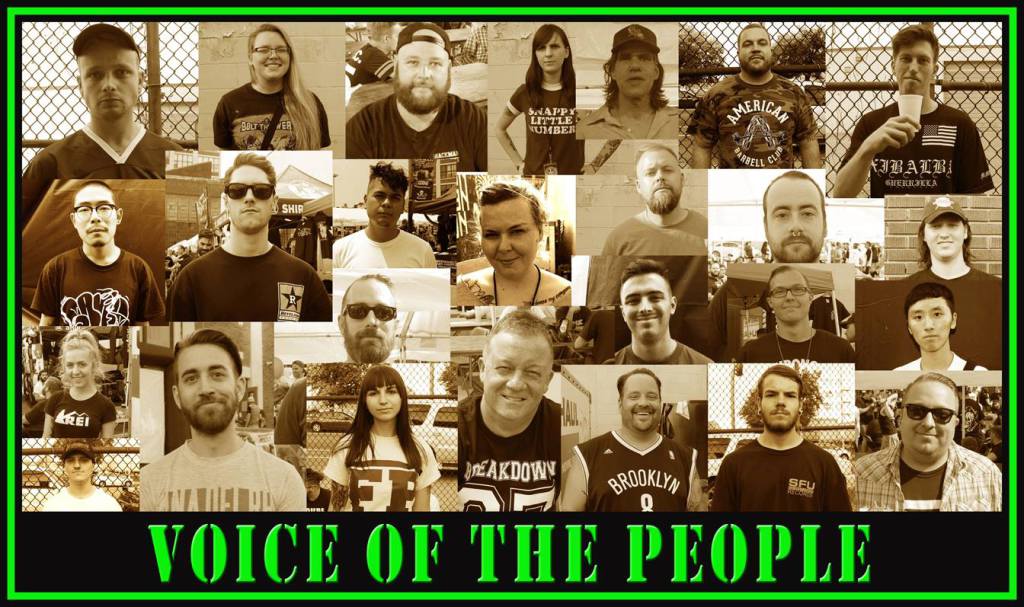 IN EFFECT REMEMBERS RAY "RAYBEEZ" BARBIERI WHO PASSED AWAY ON SEPTEMBER 11, 1997

THIS ARTICLE ORIGINALLY APPEARED IN 1988 VIA IN EFFECT ZINE ISSUE #11  R.I.P. 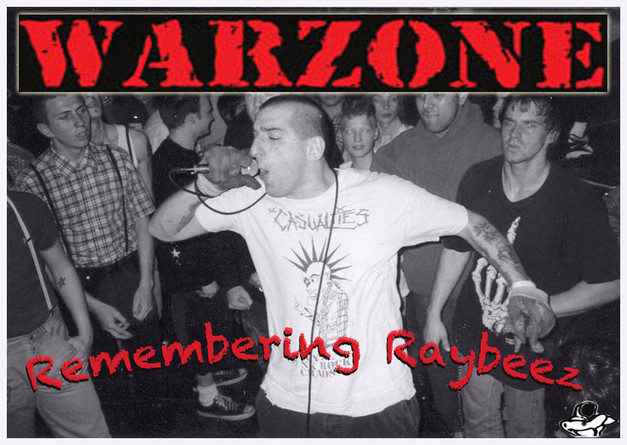 A NEW INTERVIEW WITH GREECE'S MY TURN 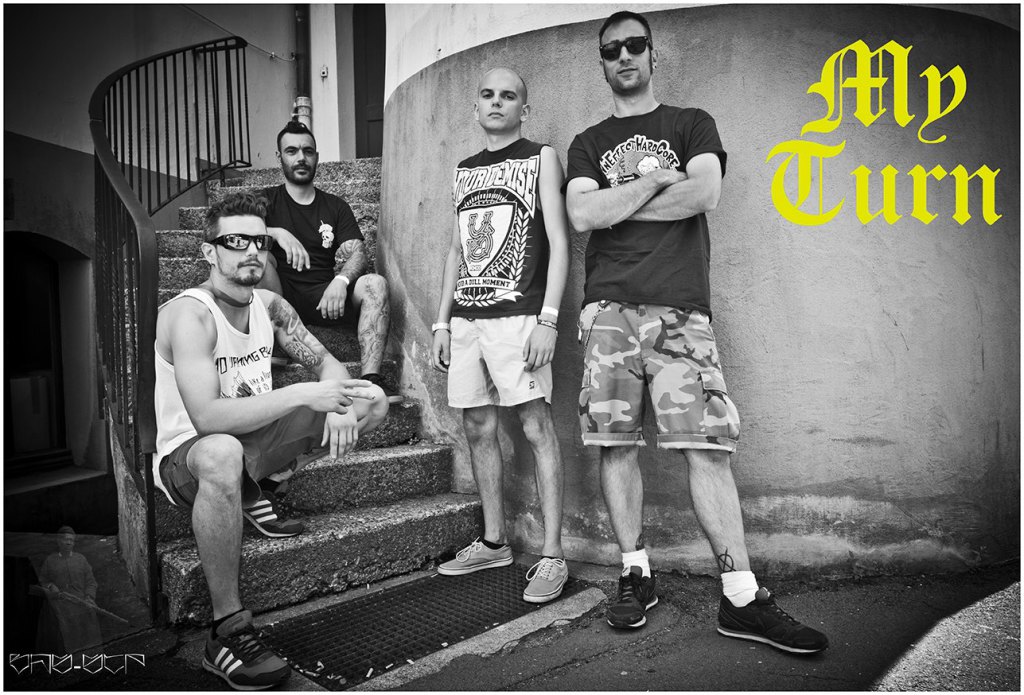 DOWN TO NOTHING RELEASE NEW VIDEO FOR "DRAW 4" 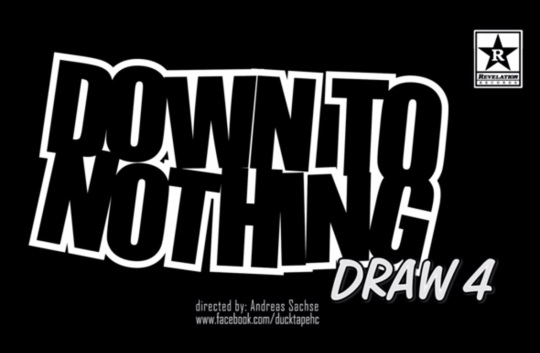 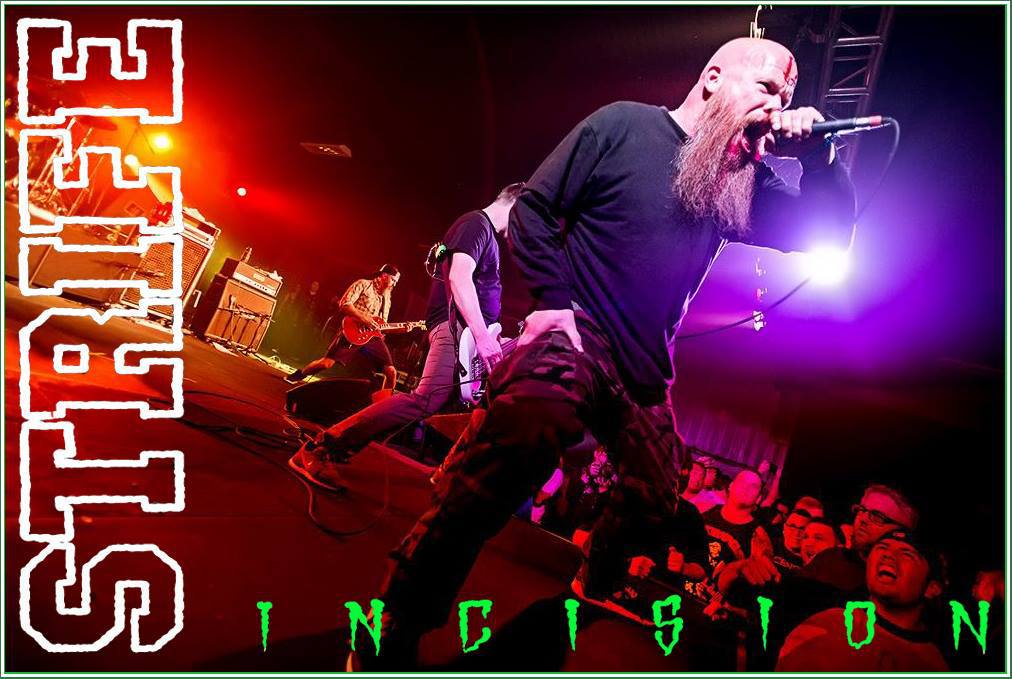 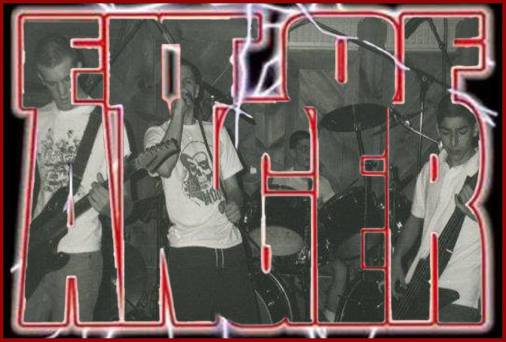 ON THE OFFENSE, THINGS WE SAY & ZOMBIE FIGHT BREAK UP 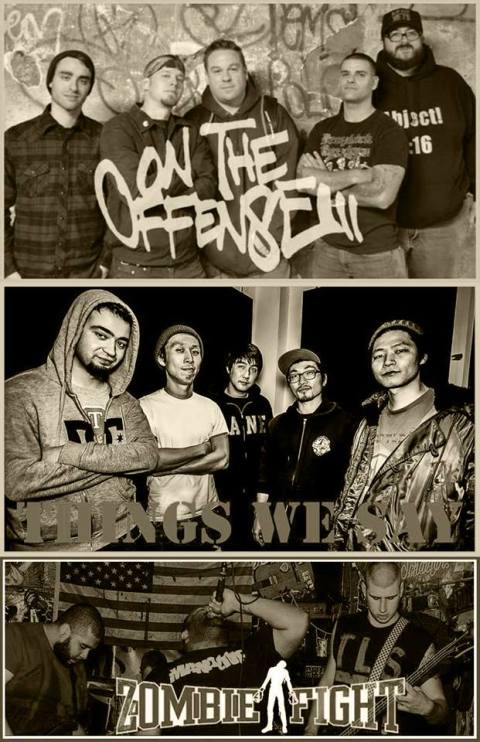 In Effect Hardcore passes on our condolences to 3 hard working bands who since our last update have announced they are breaking up...

ON THE OFFENSE from NY started out in 2011 and put out a nice CD on Dead City Records titled “Frontline” in April of 2013. Singer Sean and Mike (bass) move on to a new project called EXAMINE and Shonen (drums) is now playing with BASTARD CLAN. Check out this 2013 INTERVIEW we did with them.

THINGS WE SAY from South Korea started in 2004. They caught many people’s attention in 2013 when they did a short tour of the US leading up to their This Is Hardcore performance. Check out this October 2013 INTERVIEW we did with them.

ZOMBIE FIGHT from NY started out in 2010 and had a slew of EP’s as well as their “Echoes Of The Past” full length to their credit. Much like On The Offense they played out more than regularly in the NYC area. Their drummer Lee has started a new band called MTA and are currently looking for a drummer and a lead guitarist. Contact them if you are interested and also check out a November 2013 INTERVIEW we did with them. Mtahardcoremusic@gmail.com 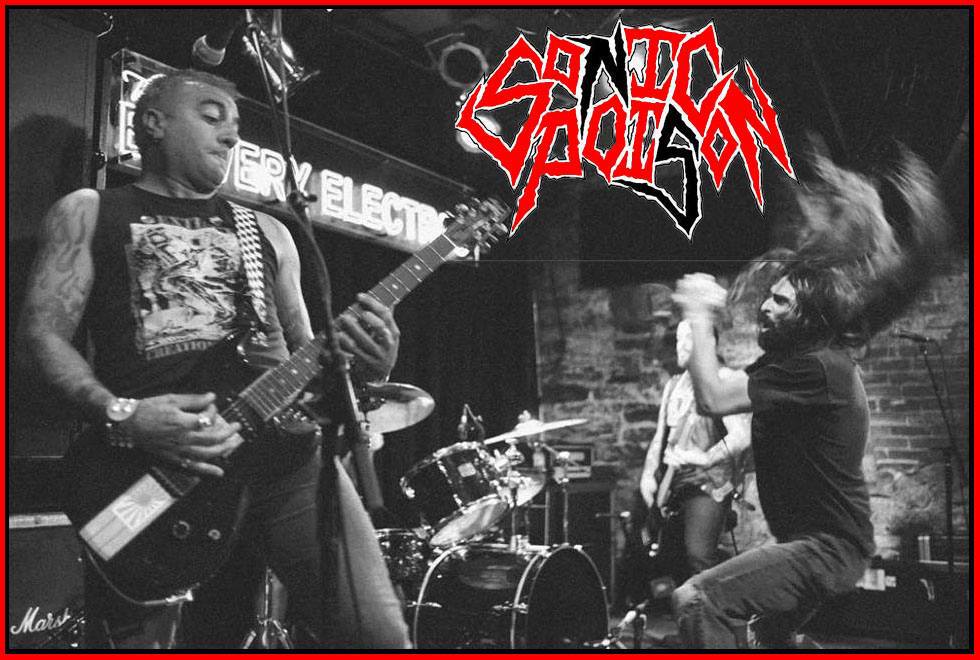 IN EFFECT CHECKS IN WITH MIKE "NOODLEZ" FULLAM...LONG TIME SICK OF IT ALL ROADIE

& DRUMMER FOR LAST CALL BRAWL IN THIS NEW INTERVIEW 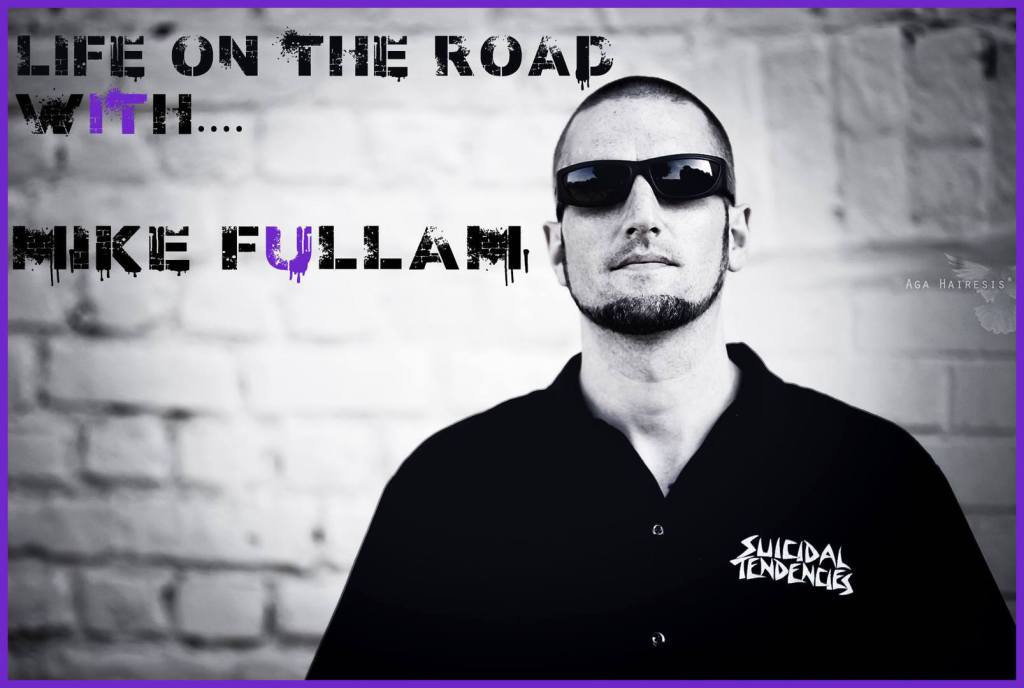 ALL PHOTOS TAKEN BY GRAY MUNCY @ THE SONS OF HERMANN HALL 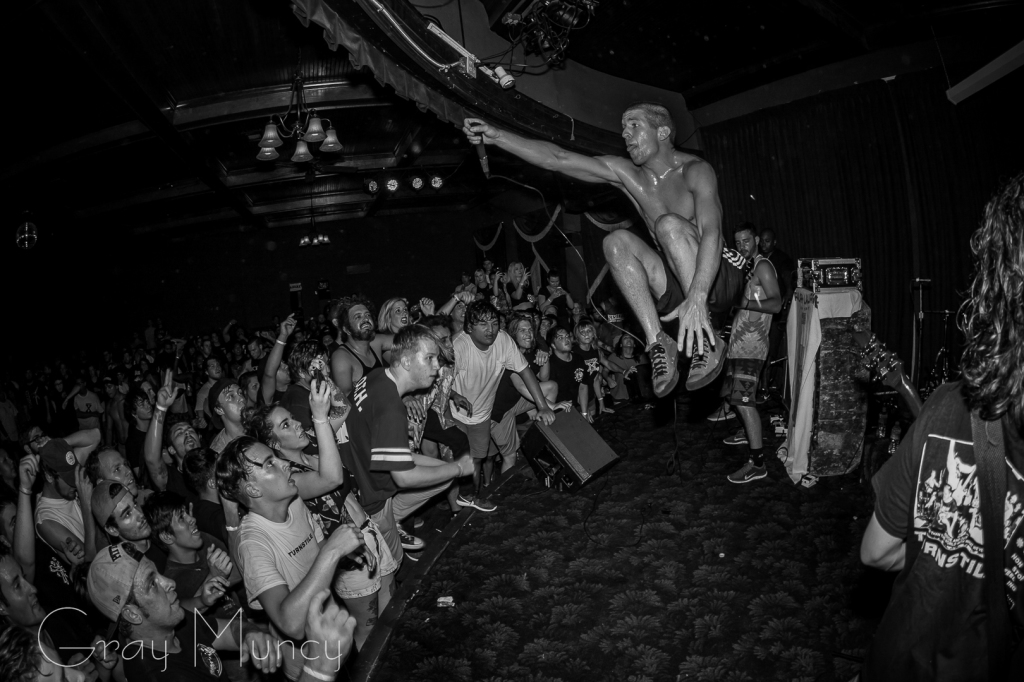 USE CONTROL BAR (BELOW, LOWER RIGHT) TO VIEW PHOTOS IN FULL SCREEN

NEW FEATURE COVERING A BUNCH OF CURRENT DIY FANZINES FROM AROUND THE WORLD! 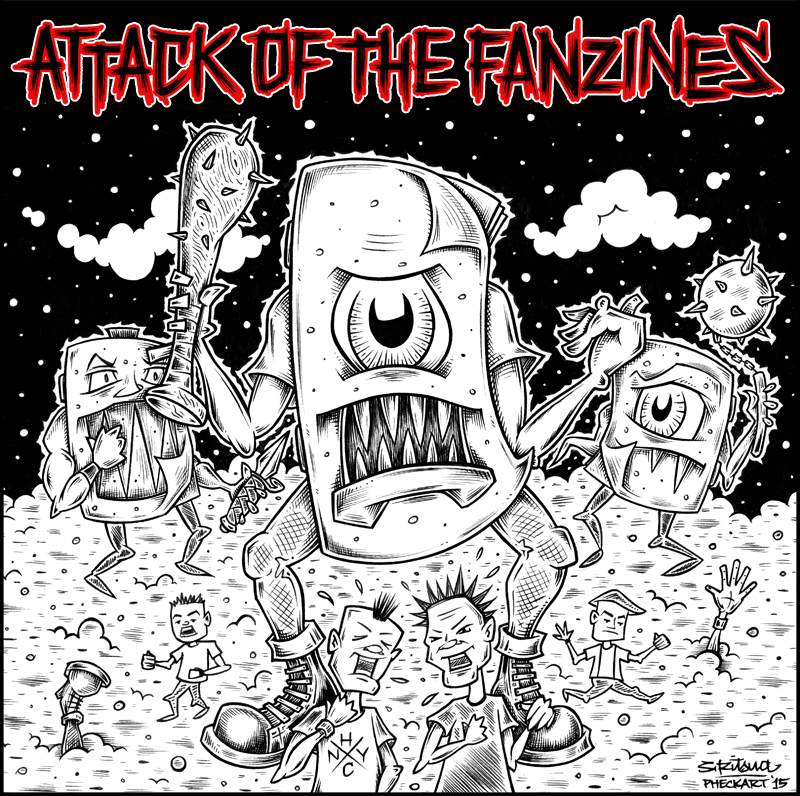 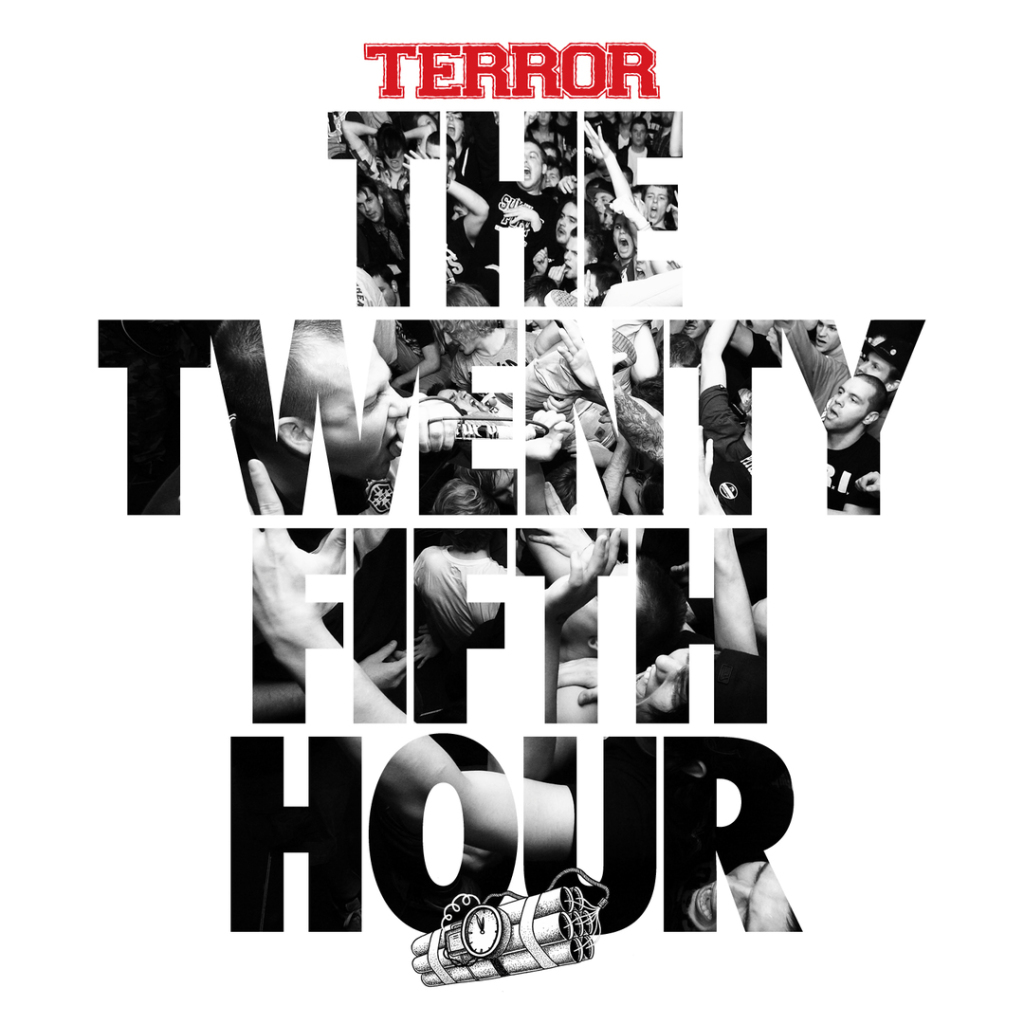 H2O RELEASES NEW MUSIC & VIDEO FOR "SKATE!" OFF OF NEW 7" DUE OUT IN SEPTEMBER 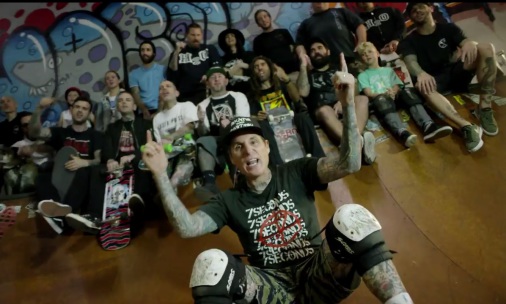 H2O are back with some new music AND video (featuring Steve Caballero) for the track “Skate!” which will be part of an upcoming 2 song 7” due out on Bridge Nine Records on September 11th. Pre-orders are available now.

Then on October 9th H2O will release their first full length of all new music since 2008’s “Nothing To Prove” titled “Use Your Voice” (also on Bridge Nine). The track listing for the new H2O album is as follows:

H2O frontman Toby Morse recently did a “Life In 1 Day” video exclusive with Fuse TV. Check it out by clicking below. 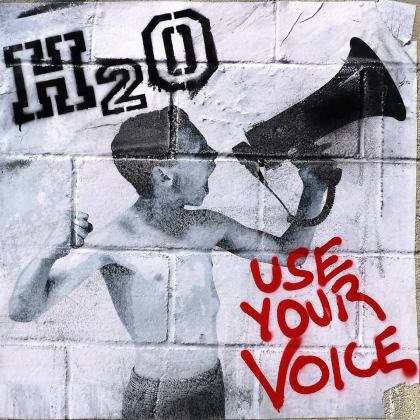 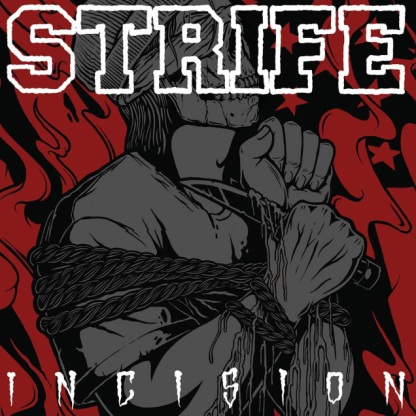 Strife will release a new four-song EP titled “Incision” on September 4th. The bands guitarist Andrew Kline has launched a new label dubbed WAR Records and will be handling the release of the effort. Revelation Records will be distributing WAR Records‘ releases, with the EP due on 12″ vinyl, CD, digital and cassette formats. Terror drummer Nick Jett produced “Incision“, which will feature a number of guests. Among them are Iggor Cavalera (Cavalera Conspiracy/ex-Soulfly) on drums, plus Ringworm vocalist Human Furnance and ex-Integrity guitarist Aaron Melnick. 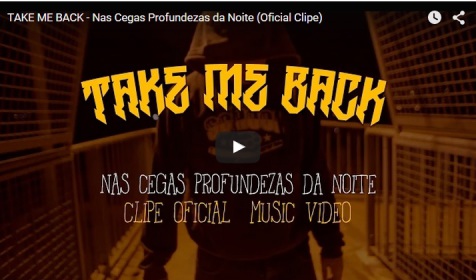 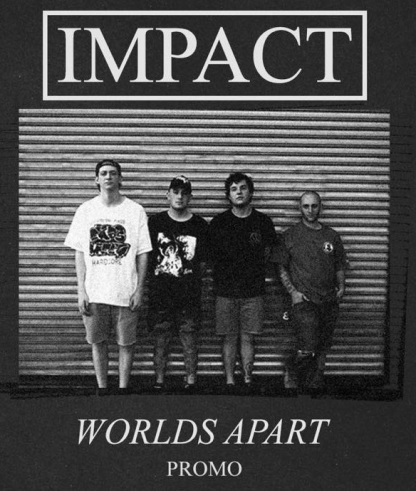 Staten Island NY’s Impact have a new 2 song “Worlds Apart” promo out which is available now on Bandcamp for “name your price”. The tracks are “Empty Words” and “Breathe” and are 2 out of the 8 tracks they recorded for an upcoming EP that at this time has no label behind it. Click on the band photo to listen. Labels get in touch if interested!