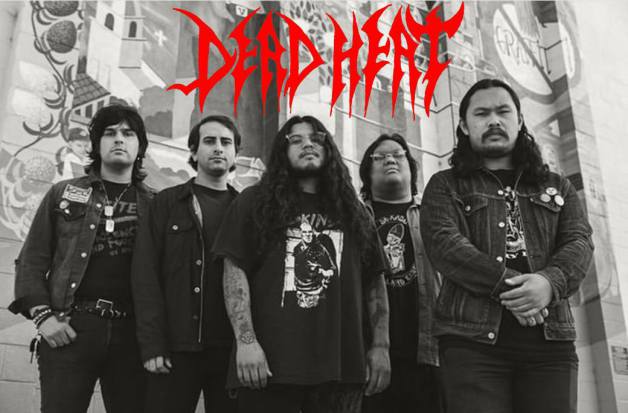 Oxnard, CA’s Dead Heat just released their second full length titled “World At War” on Triple B Records and quite simply it will beat your ass! Their hardcore/thrash/crossover style seems to lure in fans of all heavy types of music as everyone I have showed this too has given it positive feedback. The new album has a great production, is super tight and gets played LOUD and OFTEN while cruising around town in the In Effect mobile. We caught up with Dead Heat frontman Chris Ramos to conduct this interview which took place on June 24th. Rounding out their lineup is: Tony- guitar, Yogi- drums, J-Nut- guitar and Vince on the bass.

All photos supplied by the band, contact us to add your photo credit. Lead graphics by: Bas Spierings 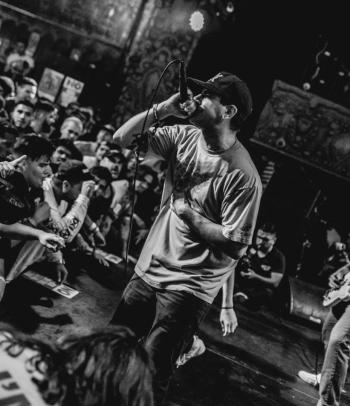 IE: Hey Chris, where exactly are you located right now and what would you usually be doing at this time of the day if you weren't answering these questions?

Chris: Right now I am currently located in my home in Oxnard, CA… to be specific, my room at my desk. I just got home from work. Normally I would probably be making food around this time or flipping through my phone seeing what I missed throughout the day.

IE: So it's been about 2 years since you guys put out “Certain Death” and now you are back with your second full length in “World At War”. Please tell us what we need to know about this album.

Chris: Well it’s twelve songs of straight riffs and groove that we thought would best describe our sound sonically in this new era of the band. We released it on Triple B Records on June 4th and it’s out wherever you can basically listen to music. With this album I feel like we really stepped up our game and grew it into a whole new monster and it only took us until the pandemic to actually start writing and getting things down again, so in a way it was a blessing and a curse because we wanted to release something sooner but with no inevitable future for shows we felt it wasn’t time so it made us hone in on our new sound and create what we now call “World At War”.

IE: You talk about this new era of the band sonically. How would you specifically describe these changes?

Chris: Well we had a couple members leave so then we added Vince on bass and Yogi on drums. With them in the band it brought light to having more ideas and just made our sound more solid I would say. We tuned down a bit as well and made our sound a bit heavier. There definitely is a lot more melody when it comes to our newer material as well, trying to have a lot more people singing along to our songs with catchy parts people will remember.

Chris: Sheeeeeesh! I hate this because no one has actually asked me this before and now you got me really thinking because each song holds different meaning but some hit harder than others. Like “Subterfuge”, “2 Cents”, and “World At War” I felt were my best songs lyrically written but sound wise I love the way “Sick Society” and “Age Of DH” came out, but then I have the “Interlude” and “Last Call” where I felt like I really tried my best to sing on so in a way it’s so hard to pick my favorite since they all have a piece of the pie. 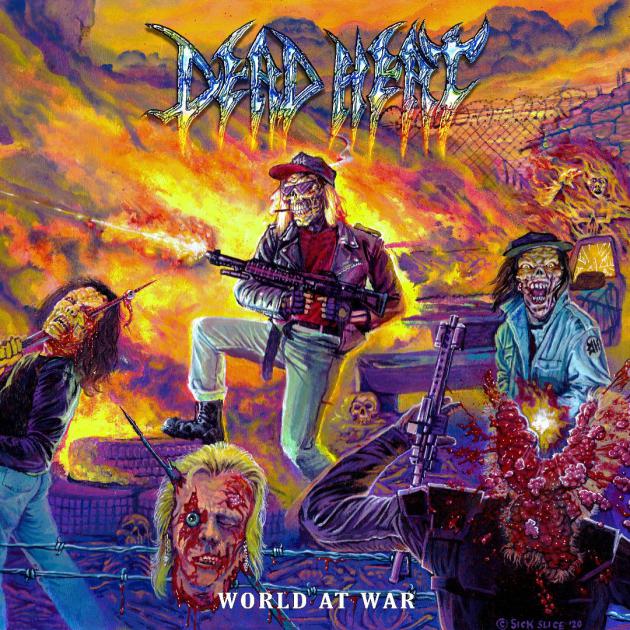 IE: The artwork on your last few releases has been pretty tight and has helped the Dead Heat merch game really take off into one of the best out there. Who does the artwork for Dead Heat and how much input does the band have into what they draw?

Chris: Well, we are fortunate enough to now have help with artwork and outsourcing some designs to different artists but we put a lot of input into what we want the bands visuals to be. Our guitarist Anthony drew up some of the original designs we had and we stuck with the idea of keeping them reoccurring. He ended up also painting the “Certain Death” album cover so a lot of the his ideas have gone into it as well as my own. 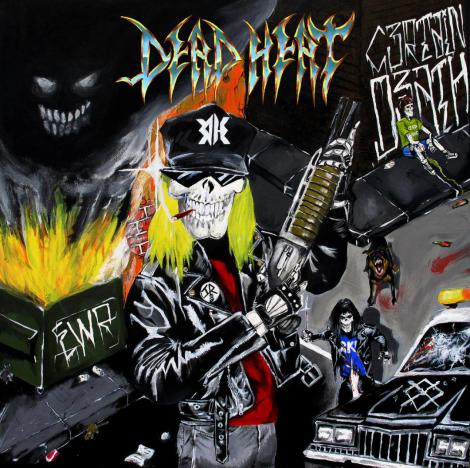 IE: Does that zombie dude on the covers of your albums have a name? He kind of has an S.O.D. “Sergeant D” thing going on there!

Chris: Haha, yeah he does have one… we refer to him as “Bones”. We wanted him to have the same feel as the (S.O.D.) sergeant and the same feel of Eddie from Iron Maiden. We wanted our own version of that because to me that shit was so sick seeing a character and automatically knowing it relates to a certain band.

IE: Getting back to your merch... Dead Heat had a shirt that came out a while back that was a take on the old S.O.D. “Speak English Or Die” album title where you changed things up a little. Can you talk about that shirt and how was it received?

Chris: That shirt was cool! I had always wanted to do an S.O.D. rip at some point because I love that band. Having our mascot it worked perfect with switching out the image. I changed it up a bit by basically putting it in Spanish “Habla Espanol O Muere” which means “speak Spanish or die” which is funny because a few months after we put this shirt out members of S.O.D. and Faith No More did a new rendition called “Speak Spanish Or Die” and I felt it was just manifested or something. A lot of people seemed to really like it and we hardly got any bad feedback off of it except someone trying to tell me that I don’t even speak Spanish when that’s my first language! Haha! 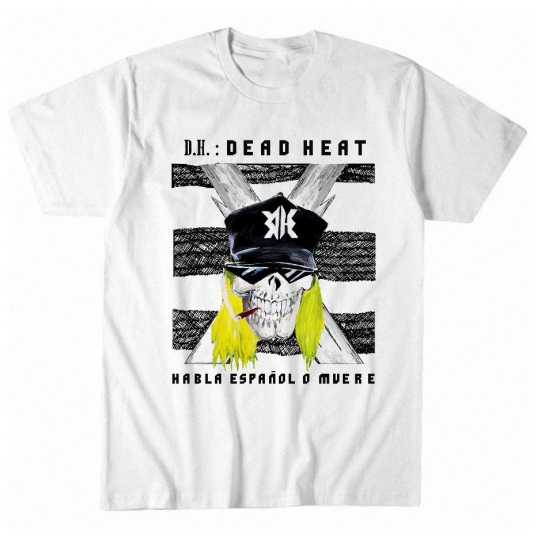 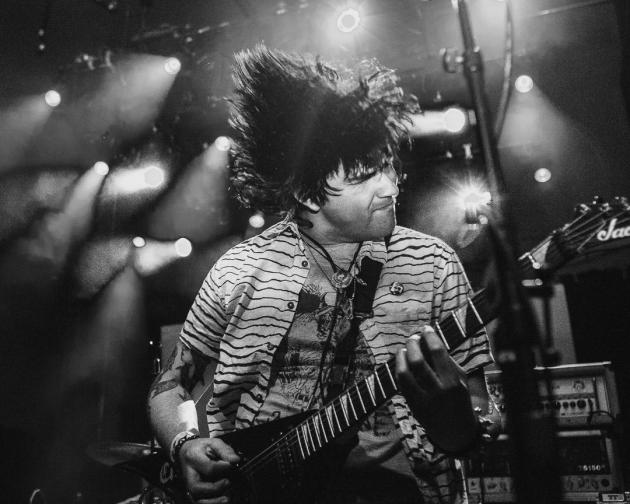 IE: Why the jump from Edgewood Records to Triple B Records for this new album?

Chris: At the time there were no real plans as to what we were gonna do after “Certain Death”. We put it out with Edgewood and they are nothing but a great and supportive label but we were asked by Triple B Records if we would like to put out our next record with them, and being the label they are we wanted to be a part of that roster. Well they ended up completely funding the record and helping us out immensely with promotion and getting our name out there.

IE: You got some interesting tracks on the new album that step outside of the hardcore/thrash style that most fans are accustomed to with Dead Heat. The songs I'm referring to are “Interlude” and “Last Call”. It takes all five band members to create any new song so I guess my question is who within the band initiates songs like these and are there luke-warm feelings about maybe stepping outside of the box sort of speak? What's being said amongst yourselves when songs like these start getting put together?

Chris: With the songs “Interlude” and “Last Call” a lot of it was our guitarist Anthony and his love for hair metal. We always wanted to make a ballad sort of speak and we thought what better time to throw it all on the table. “Interlude” is about five different guitar tracks and was supposed to be just guitar until we got in the studio and realized it was gold played in full. “Last Call” is our party ballad… all the lyrics are innuendos about drinking and all the riffs are references to the rock gods before us. I feel like these songs are for sure different and stand out but let us show our diversity while still being us and hitting with just as much intensity. 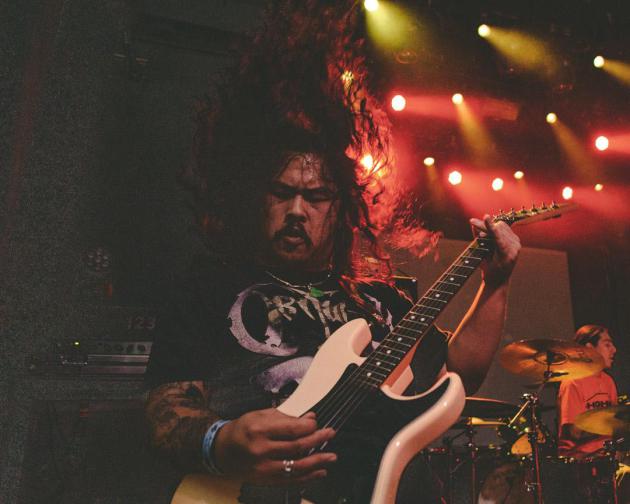 IE: I usually steer clear of the "what are your influences" question but with your band I have to make an exception as there is a lot going on within Dead Heat’s style. What are some bands that most of your band would say are a direct influence on what you are doing?

Chris: We have a lot of influences and over the years they have changed a bit. I would say from our first years we were more influenced by a lot of NYHC bands like Cro-Mags, Leeway, The Icemen, and Crumbsuckers to say the least. While still having influence from those bands we were into a lot of the thrash crossover bands like Suicidal Tendencies, Uncle Slam, Vio-Lence, Excel and Wasted Youth. We’ve taken influences from other metal bands like Sepultura and Metallica and saw how they went outside the box which in turn let us show our influences with more obscure hair metal and stadium rock like White Lion and those types of bands.

IE: There must be a lot of anticipation within the band these days with finally having shows booked again. Can you tell us what the feelings are like within the band knowing you have actual tour dates on the horizon and can you sort of go over the game plan for Dead Heat playing out live for the rest of 2021. What's announced already and what other places are you looking to hit?

Chris: It’s a crazy feeling knowing that everything is back to normal and shows are just going to happen again. Like it’s been a crazy year and a half of uncertainty; and now knowing that shows are coming… and fast, is crazy. We have a lot on our plate coming up and I feel like we’re just barely scratching the surface. Our first show back will be this coming weekend for our record release on July 3rd then after that we got a couple shows then we fly to New York in August to play a weekend with Mindforce and Regulate. Got a couple other shows on the West Coast and some little runs coming in August/September. Got another 4 day tour with The Fight in October. Then got a couple other surprises before the end of the year and going into the new year. Needless to say it’s gonna be a busy year. 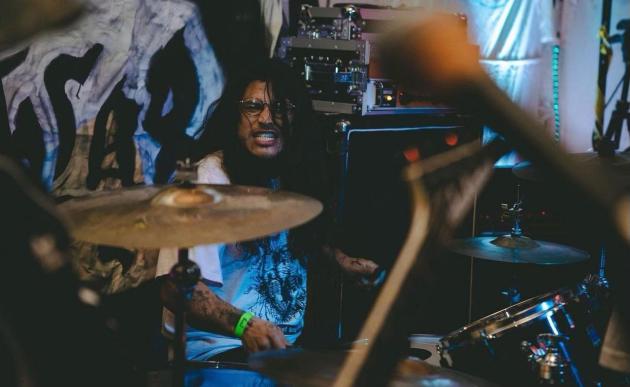 IE: What was the last Dead Heat show? Where was it… when was it… who else played?

Chris: The last Dead Heat show that was played before the pandemic hit was Drain’s music video shoot show in someone’s random backyard in South Central LA. It was at the beginning of March 2020 and we were a surprise set. The lineup was Drain, Section H8, Combat Shock, Risk and us.

IE: What have been your favorite places to play and what makes them favorites?

IE: What are bucket list places that you just have to get to with this band and what's their appeal?

Chris: Some of the places on my bucket list for this band are Mexico, Australia, Japan, and Southeast Asia… all of which are places we were supposed to go and play before the pandemic. Another bucket list place to play is Ozzfest for the rockers! 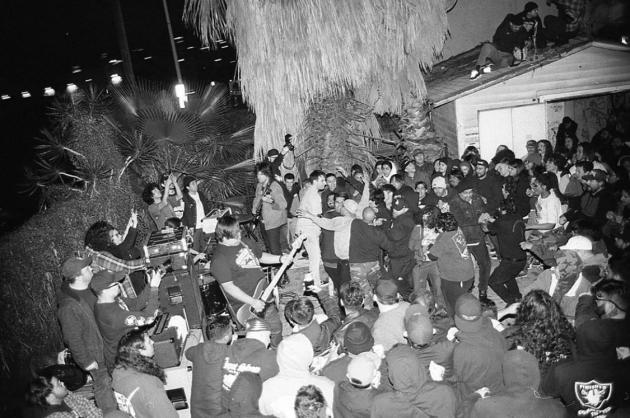 IE: Give us a brief description of the weirdest/wildest/craziest show or tour story you have had to date with this band.

Chris: One of the wildest shows we ever played was probably Sound And Fury 2018. I had an asthma attack and blacked out mid-set and almost fell over the drum set. I kept it cool but then after the set I saw a kid with a broken arm, then go outside and realize someone got taken to the hospital. It was complete chaos that night! Haha!

IE: That’s all I got. Anything else you wanted to add? Any shout outs? Thanks for your time!

Chris: Shout out to all the homies! All the foos! Shoutout to Oxnard/Ventura, the 805, RBS, LAHC. Shout out to Taco De Mexico and Chams. Shout out Triple B Records and shout out to the famiglia. Nardcore for life! 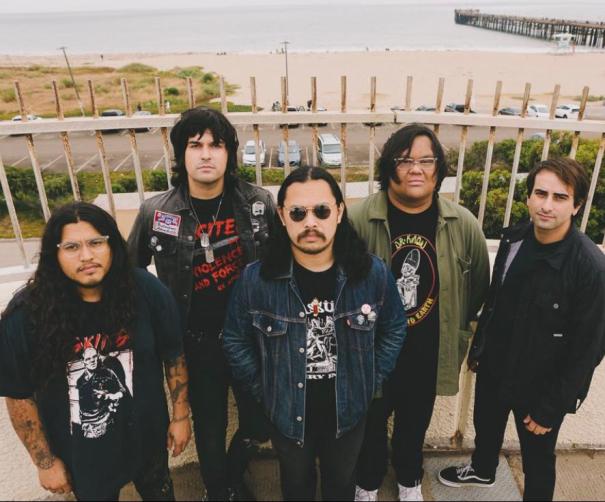