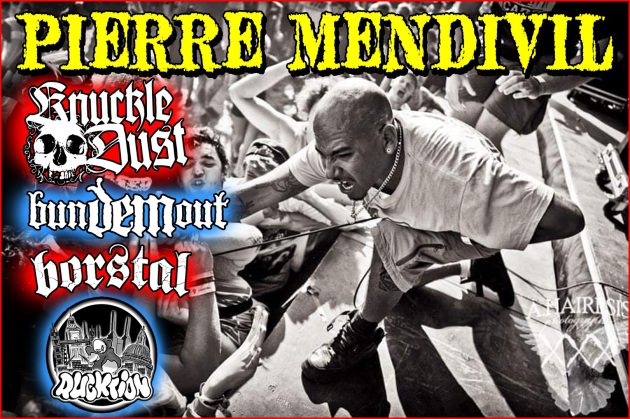 When it comes to figures in U.K hardcore, they don’t come much more legendary than Pierre “Pelbu” Mendivil. As singer of Knuckledust and Bun Dem Out and founder of Rucktion Records, he has been at the heart of UKHC for many years and continues to do so with pride. He also has a new band called Borstal and Gavin Brown caught up with him to get the lowdown on this new project as well as discussing Knuckledust, Bun Dem Out and Rucktion, the effect of the pandemic on the hardcore scene in the UK, his favorite venues to play and his journey in hardcore in general. Borstal’s debut 6 song EP “At Her Majesty’s Pleasure” drops April 1st via 4 Family Records. Interview conducted in November of 2020 by Gavin Brown. 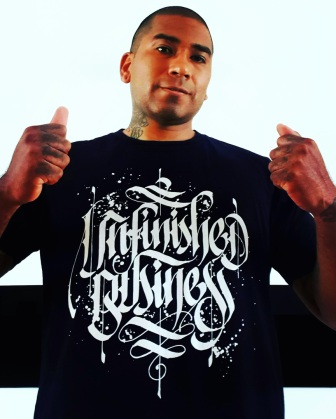 IE: Your new band Borstal are working on a new EP. How is the recording going and can you tell us a bit about it and what we can expect?

Pierre: Recording with the new band has been going great, working with talented longtime friends does make it a stress free process and I'm having fun doing what I do. The whole project has been moving at such a fast pace but feels so natural… we are all very excited to unleash what we have created. Borstal has a strong NYHC inspired sound musically, mixing hardcore metal and punk vibes, add to that my London Latino style vocals over it, to give you a rough idea. We have some very anthemic songs with big sing-a-longs, some hard dancefloor movers and even a classical cover song done our way.

IE: The cover you just mentioned is “King Of The Jungle” by Last Resort. Was that song an easy choice to cover with Lee being the son of Arthur from Last Resort?

Pierre: Yeah, it wasn't a hard choice, it’s a classic street anthem that we all loved from a classic band. I mean, Oi music is undeniably part of the roots of real hardcore from the streets and we proudly represent that being a UKHC band. Maybe expect a few other Oi covers in the future, repping our roots.

IE: Has Arthur heard the track and what does he think?

Pierre: I'm not sure if he has yet as it's still getting mixed and stuff. But yes, I'd be interested to hear what he thinks myself.

IE: You are just about to release your first video. Can you tell us which song it is for and what the video represents?

Pierre: Yes, we have a video in the works. The first lines are "me tienen que matar para parrame" which means they'll have to kill me to stop me. Lyrics I wrote for it were pretty much inspired by the current pandemic fearing world we are all trying to live in right now.

IE: Have you got plans for a full length album at all?

Pierre: We have already started planning the full length… the guys have songs in mind and ideas for others so I'm sure it won't be long till they start  building our next release. 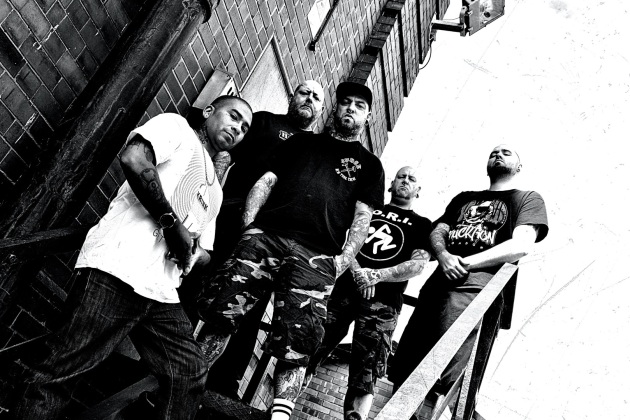 IE: When did the idea of getting Bortsal together as a band happen and how did it all come together with the lineup?

Pierre: My good friends Wez4 and Lee Kitchener approached me during the peak of the first lockdown asking if I would like to work on a band they have had in mind for a while. As a guy who likes to keep busy which obviously I wasn't at the time with all Knuckledust shows and tours being cancelled for 2020, I jumped at the chance. I met their brothers Nick Barker and Jamie Hunter at our first practice and everything just clicked. A few weeks later were in Monolith Studios in Tottenham recording the EP.

IE: Who are the biggest influences on the sound of Borstal?

Pierre: From where I stand it feels like the legendary Sick Of It All are the biggest influence to this bands style and vibe. Definitely one of the most important bands to my introduction to this scene and the band I lost my front tooth watching at the Marquee club as a youth.

CLICK BELOW TO WATCH THE "VICIOUS CIRCLES" MUSIC VIDEO BY BORSTAL 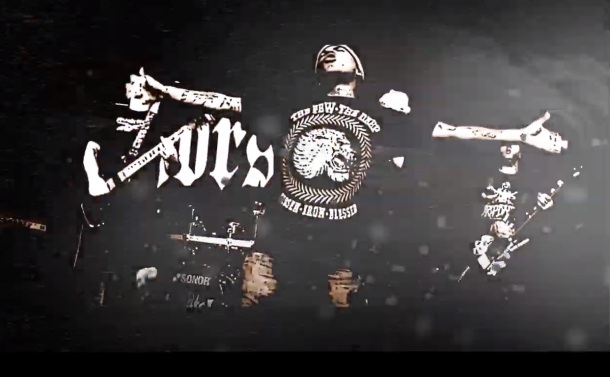 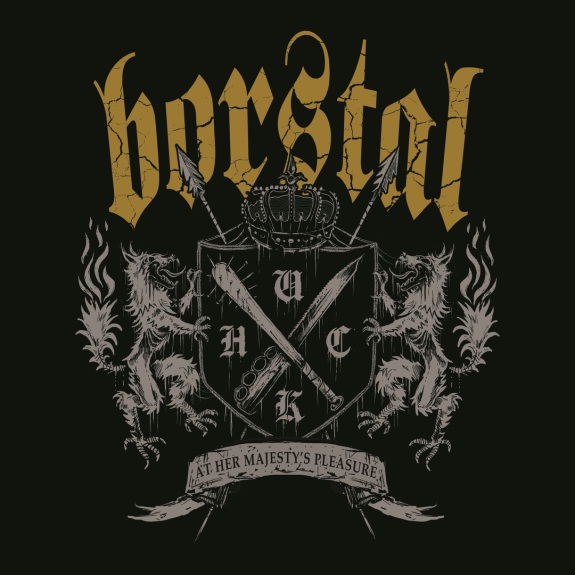 Pierre: I have been lucky enough to be working non-stop through all the madness, but I have also found time to record and release a couple of new songs with one of my other hardcore bands Bun Dem Out LBU and had the honor of laying down a good few guest vocals for some bands from around the world. If I had my own vocal booth I'm sure I would have recorded a ton more this year but we make due with what we have right now.

IE: Do you think the hardcore scene will come back stronger when this pandemic is either over or more under control?

Pierre: This new cancel culture has definitely eliminated a good few bands haha but I think it will all hinge on if there will be anywhere for bands to play. Venues have been hit hard all over and if we ever get back to a place where live shows can happen again won’t every band on earth want to start playing so I expect a waiting list for bands of all sounds competing for venues. The hardcore has constantly been growing stronger especially since the rise of the internet to promote it with so I doubt it will ever die down. 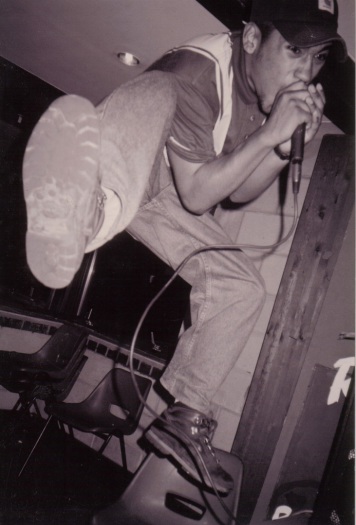 IE: Are you missing doing gigs during this time?

Pierre: Most definitely, I can’t wait to go see a decent dancehall sound system or just hang out at a show with my friends. Performing is like therapy for many of us too so it’s needed now more than ever and I hope some people will stop taking this culture of ours for granted.

IE: What do you think the long lasting effects of all this will be on venues that host hardcore and punk gigs in this country?

Pierre: Many will be forced to close I imagine but it’s nothing new to us if I’m honest. We’ve always had this battle over the decades. One place shuts down and we find another till they lose enough money and kick us out or close down!

IE: What venues across the country have a special place in your heart and what have been some of the best times at them?

Pierre: I respect Boom in Leeds, a true DIY venue run by real hardcore peoples that support underground music and the message. I haven’t had the chance to play there yet but enjoyed seeing a show there and love how they run the place. If anyone is in the position to help this place with donations or a purchase from their shop please do it. The 12Bar club in Central London (RIP) was our home for many years till it closed down. We have so many fond memories of that spot and I really miss it. The Underworld in Camden is another favorite… always a good sound and all who worked there were like family. What with its location it started getting a bit too expensive for us but it really supported our scene here in the UK.

IE: Knuckledust have a sold out 25th Anniversary show next year at the 100 Club. Are you looking forward to the show even more now and what can fans expect?

Pierre: Yes, I can’t wait as that will probably be our next show and I get to see Ninebar live again and you know how it goes when Ninebar and Knuckledust link up, LBU party time! We will have a new EP out for that so some new songs in the set and a few other surprises for the kind people who have supported us by selling the show out. 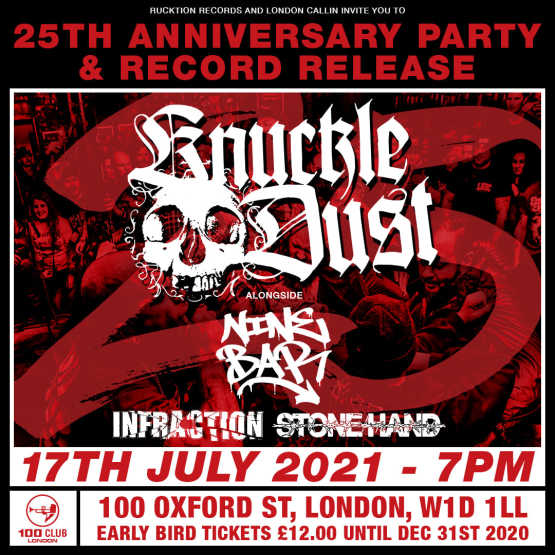 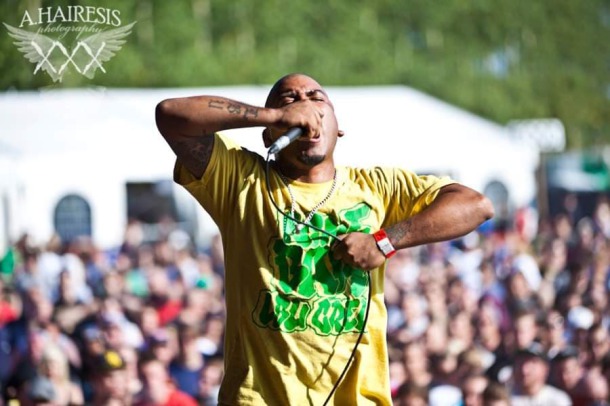 IE: Are there plans for a new Knuckledust album at the moment?

Pierre: An EP is definitely on the horizon but who knows, it may expand into an album if the guys feel like it. Studio is booked and paid for already so February we start recording 100%.

IE: What has been the most memorable gig that Knuckledust have ever done?

Pierre: We’ve been very lucky over the years and played some great shows in amazing places alongside some of our heroes but it’s always memorable when we play hometown shows where we began.

IE: You also sing in Bun Dem Out. Have you any plans for new music at all at some point in the future?

Pierre: We have new songs on the way that are all recorded and plans to record more after that, maybe some more split CD’s with friends, but yeah we won’t stop, trust me. 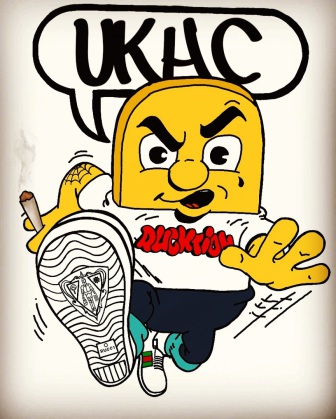 IE: What have been some of the highlights of running Rucktion Records?

Pierre: Highlights have to be seeing bands go on to bigger things after starting out working with us and the way the bands and label inspire each other and teach each other. Were a label run by people who are in bands so we hope we offer a different take on things than a label run by a businessman or someone whose goal is just to take a percentage of what the band makes. Plus it is a family of bands and majority of bands members are crew so it’s one for all and all for one.

IE: Has the advent of the internet and social media made it easier to run a record label and are you glad you had the grounding you had by doing it pre-internet?

Pierre: There’s pros and cons with the internet when it comes to label stuff. We do it for fun so it doesn’t affect us greatly but there have been many changes from the way it works when we started. We learned fast DIY is the way we wanted to do things when and I am grateful we have those roots because its shaped everything till this day in a way many newer labels and bands can’t comprehend.

IE: With so many bands on the go and working on Rucktion. Do you find it a difficult task to fit everything in?

Pierre: It has been challenge during some parts of my life like when I became a father but at the end of the day it’s not something we feel the need to be in neck deep in 24/7 ‘cos family and real life responsibilities always come first. Hardcore culture is engrained in us so deep we can always step back and know when we return it always feels like we never left.

IE: How important has the LBU family been for you and UKHC since its inception?

Pierre: It’s our style… true London hardcore. Many come about calling themselves London hardcore but just sound like a million other bands, just like in graffiti… style is everything and undeniable. We have our own that we crafted and represent how we grew in this shitty city.

IE: What have been the sheer highlights in your musical journey so far?

Pierre: Being in this for so long… every time I touch the stage or record is a highlight for me because I’m so so grateful that I can still be in a position to make the noise I love, spread the message and represent my city and crew for the world to see and hear. 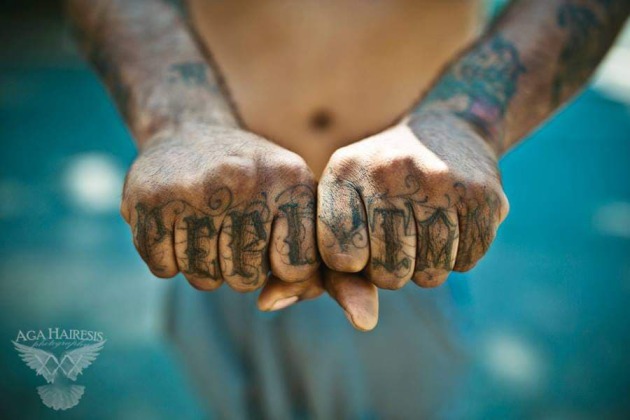 2012 KNUCKLEDUST INTERVIEW ON IN EFFECT