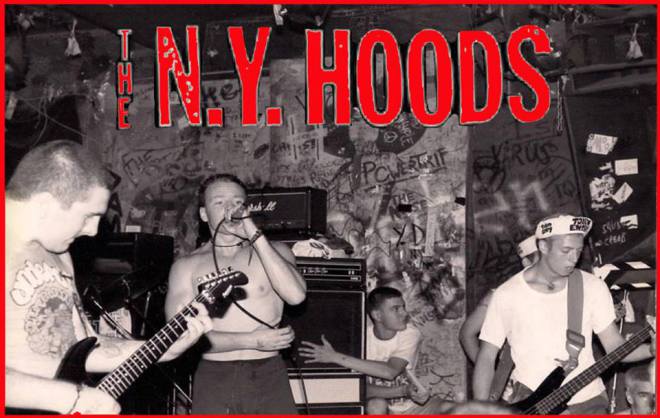 The NY Hoods were not the greatest or the worst band to ever come out of the thriving NYHC scene of the late 1980’s but they have always held a special spot in the old memory bank as they were one of the openers for my first CBGB’s hardcore matinee on July 19, 1987. I had previously been to CB’s for a metal matinee a few months earlier featuring the likes of Possessed, Dark Angel and Caligula but nothing could quite prepare me for what I was about to jump feet first into.

Trip 6, Nausea and the then and still mighty Agnostic Front shared the stage with the Hoods that day. I remember picking up one of their t-shirts for like $5 bucks over towards the pool table area where the bands would sell their shirts/demos/records etc. I think I still have it somewhere in a closet and even back then I couldn’t believe a band would sell their shirts so cheap.

The next day while taking the 7 train out of the Main Street Flushing station to work I looked across the aisle and noticed that the guitar player Mike “Smegma” from the NY Hoods was sitting across from me. As far as I recall he was dressed for some kind of blue collar gig with work boots or something like that. Although I wouldn’t have known exactly what to say to him then it kind of sunk in that these guys  this hardcore music were just regular guys having fun with it kind of like me and my friends were. Do you think some kid in England who went to see Iron Maiden the night before would be sitting across the aisle from Steve Harris on his train?

As someone who has conducted an interview or two over the years I have to hand it to WNYU’s host Spermicide on this one as the NY Hoods are obviously there goofing around and having a good time as she tries to stick to her line of questioning. For the listener you may get a laugh or two when they explain their song “True To Life” is about Charms Blow Pops, or maybe it is about being true to yourself, but Spermicide kept things together for the 10 or so minutes that the inmates ran her asylum on air. The band brought with them and played on the air a live CBGB’s tape featuring “True To Life” and “Relative Power”… both substandard sounding to their “Built To Last” demo which was their high point recording wise in their short lived time together. Run time: 13:09