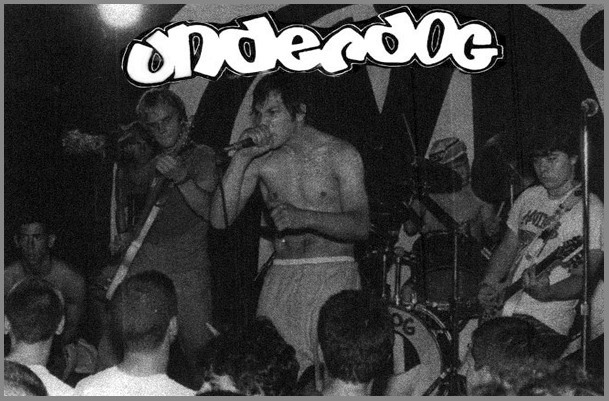 I was already a big fan of Underdog the night I tuned in to hear them play live on Crucial Chaos. Richie, their singer, primary songwriter, and commanding frontman, had left the band to tour with Youth Of Today and Carl from The Icemen had stepped in on vocals.

The band wasn’t happy to have Richie leave, and why would they have been? Not only had their EP been released and done well, but they were losing a guy whose talent was obvious. I spoke with Danny Derella, Underdog’s original guitar player, and he described the experience of recording the classic EP, hearing the vocals played back for the first time: the growls, melody, range, and texture of the vocals were overwhelming. He couldn’t believe his ears.

On the other hand, it might be true, as Danny suggested, that back then most people didn’t care about how well you sang; it was about the energy you brought to the stage. So when Richie left, the band asked Carl (aka Carl The Mosher) to join because he was one of the best dancers in the scene. His moves were “smooth and effortless, almost like an ice skater, but not to say that he was dainty. He was the shit! He had presence, charisma, and style.”

I liked Carl’s vocals when I heard Underdog play that night. He sounded like a snotty street kid who listened to hip-hop. In other words, he picked up right where Richie left off. I heard some great songs for the first time that night, like “Stop, Look, and Listen,” and “Back To Back,” which struck me as an instant classic.

Underdog toured across the US, doing about thirty shows with Carl at the front. An especially memorable show was in Manhattan, Kansas, where kids from several surrounding states drove in to hang out all night, partying by bonfire in between bands. There was a sense of community. This was what hardcore was all about.

Life in a van, however, began to take its toll. “We were dirty, hot, and hungry,” Danny said.

At another show, in Fayetteville, Arkansas, Underdog played behind a screen of chicken wire. “Play a guitar solo,” someone in the crowd screamed, and broke a bottle and wielded it at the band. “I’ll play a guitar solo if you give me twenty dollars,” Danny answered, and the guy gave it to him. He used the money to  the band a pizza.

Carl was only with Underdog for a handful of months. Richie came back and the band was better than ever. They went on to write some of their most loved songs, like “A Lot To Learn” and “Vanishing Point,” songs that are as powerful today as they were in 1988. Run time: 23:21