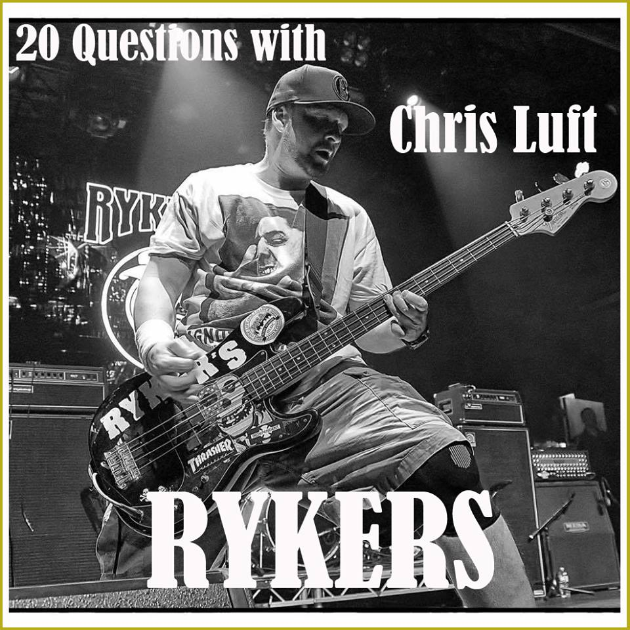 Rykers are one of the few Euro based hardcore bands who have figured out how to be successful on both sides of the Atlantic Ocean. Haven gotten their start in 1992 this Kassel Germany based outfit has toured all over the world releasing numerous albums including their latest titled "Never Meant To Last" which came out in 2015. Rykers history includes a long hiatus from 2000 through 2008 and numerous lineup changes along the way as well. Just last year singer Kid D left the band leaving bassist Chris Luft as the sole original member of this long running unit. On the strength of "Never Meant To Last" the band made another trek across the Atlantic where they played this year’s Black N Blue Bowl in NYC. We caught up with Chris when he got back home and asked him some obvious and not so obvious questions in this latest installment of "20 Questions With"...

1. Where are you located at this very moment and what do you think you would be doing if we weren't harassing you?

Chris: I’m laying down in bed and reading a 4 (!!!) page interview with a guy named Harley Flanagan in the German Rock Hard Magazine. 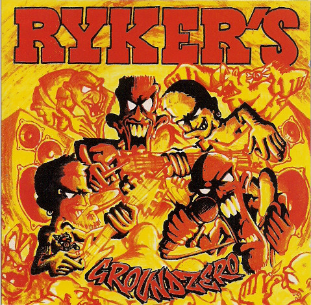 2. Can you give us a short Rykers resume?

Chris: I founded the band back in ‘92, together with Meff and Kid D. We released 5 real full length albums (“Brother”, “Ground Zero”, “Lesson In Loyalty”, “Life’s A Gamble”, “Never Meant To Last”), some EP’s (“Payback Time”, “First Blood”, “Hard To the Core”), quite a nice number of 7”s and a double live record (3 sides live and 1 side studio… like “Kiss Alive 2”. I have never really counted all the shows but all over the years there must have been around 400 -500 shows.

3. Where did the name Rykers come from and is there any connection with the infamous jail in NYC?

Chris: Our drummer back then and myself were huge comic fans and we really liked The Punisher. So we took the name Rikers from there – and modified it a bit. We thought that would perfectly fit our style. Later on we found out about the real Rikers Island. Lately someone posted something on the BNB page saying something like “Rykers and Hazen Street on the same bill makes sense…”. Funny.

4. If you could go back and do over anything in Rykers' history what would it be?

Chris: On our first 7”. We had a song called “Nothing To Regret” – well, I was a little naïve back then – but hey, that`s still true up to this day and that`s why we still have that song included in our playlist. Maybe the separation between us and our old drummer (who used to be one of my best friends) could/should have been handled without bad blood – but that’s a bit more of my concern. 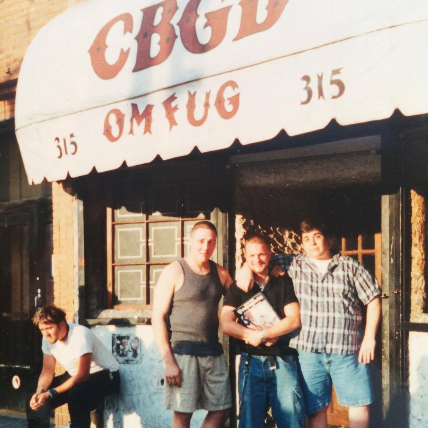 5. A long time ago Rykers played CBGB's. Tell us what you recall from that show and that trip to the U.S.?

Chris: In 2000 our old pal Brendan from SFA hooked us up with that show. I remember Comin’ Correct, SFAR, Death Threat and Son Of Skam being on the bill. It was part of a 3 day short trip to the East Coast set up by Rick Healey (25 Ta Life) where we also played the Hanover House in Meridan, CT (with 100 Demons and Death Threat) and Poughkeepsie (4 In The Chamber were on that bill). Playing CB’s was like a dream come true. I remember when I came to NYC for the first time – that was around ’92 and we went all the way down to the Bowery just to take a picture in front of CB’s. I never really thought of playing there one day…

6. When you were younger and thinking about picking up and learning an instrument what other bands and in particular what musicians did you look up to and think to yourself "I want to do that”?

Chris: ACE Frehley! I remember using a tennis racket as my guitar and jumping around my room while blasting “KISS Alive II” over my stereo… Ha, Ha, Ha!

7. Looking over the bands history what are some of Rykers accomplishments that bring you the most pride?

Chris: Hmmm, I mean we were a couple of kids that wanted to get out of our home town and play some shows. I never took anything for granted and I really appreciate the way things turned out for us. We played several shows in the US, played club shows and huge festivals all over Europe and just lately headlined a festival in Bandung (Indonesia) in front of 15.000 kids that really was an outstanding experience. But the most important part was (and still is) making friends all over the world.

Chris: I love Long Board lager – but that’s a Hawaiian one, Bud – for whatever reason - always reminds me of vacation, PBR – it comes pretty close to the cheap German cans that we used to drink before shows and I like Stone’s Arrogant Bastard. A good friend of mine works in the American beer industry – so I’m kinda up-to-date and I know you guys have some outstanding micro-breweries over there. Talking about German beer it has to be ice cold KROMBACHER! 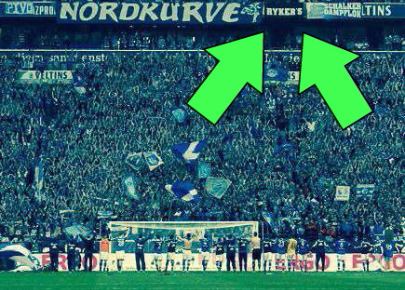 9. Outside of music what kinds of hobbies do you have?

Chris: Being from Germany I have to say soccer! You may check out SCHALKE when they are playing Champions League – we have a RYKER’S banner in their stadium. You will see it at every home game. Besides that I really like to travel around the world.

10. Do you feel like European hardcore bands get a fair chance with American hardcore fans?

Chris: Good question – I think it’s getting better with the internet – so kids can easily check out a band. From our experience – nobody left the room while we were playing – so I guess they gave us a chance.

11. What was the most dangerous or scary situation you have ever faced while being in Rykers?

Chris: After the wall came down we played a lot of shows in Eastern Germany which was kinda rough because they had like tons of Nazi skins all over – and those guys really liked to attack venues like the ones we’ve played. I remember a show we played somewhere in Germany and we had three right wing morons showing up and no one in the audience seemed to care about them. So our singer took care of all three of them.  After that we finished our set but we expected them to return with their friends so we were like under alert (you never know what to expect if you start shit in a foreign city) but actually nothing else happened that night. We played a show in London at the Astoria (together with the UK Subs, Vice Squad, Agnostic Front and the Business).  While the Business played a lot of skins in the audience started that sieg heil shit and a riot broke out. They stopped the show and there were fights all over the place. Inside the venue outside the venue – everywhere – we made it out alive… it was – interesting! 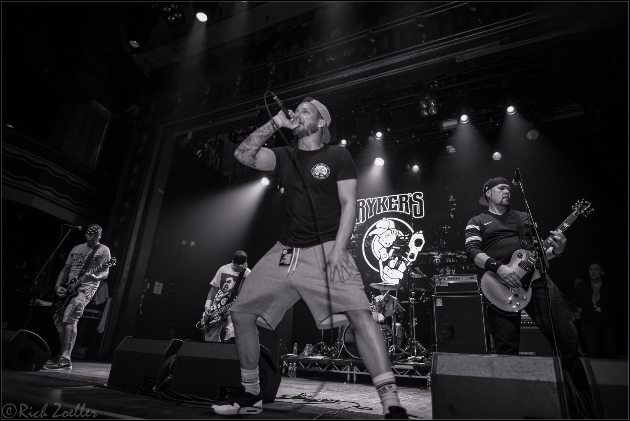 12. Over the years your band has played shows with tons of American hardcore bands on tour in Europe. From your experiences who have been the people who you have formed the best relationships with over the years?

Chris: Well I think I can say we got along with almost every band we played with (the few exceptions aren’t worth mentioning). Pittbull, SFA, Sub Zero, Breakdown – I’m still in touch with all those guys. I would consider them and the guys in Agnostic Front, Madball and Sick of it all good friends. Actually there is not enough space to mention them all. You might know that I´m visiting Mike Dijan (Breakdown, Crown Of Thonrz) at least once a year – and if the schedule fits we are doing trips to Malta together. He’s like a brother from a different mother… Ha! Ha!

13. If you could have lunch with someone famous... either alive or dead... who would it be with and what would you say to them? 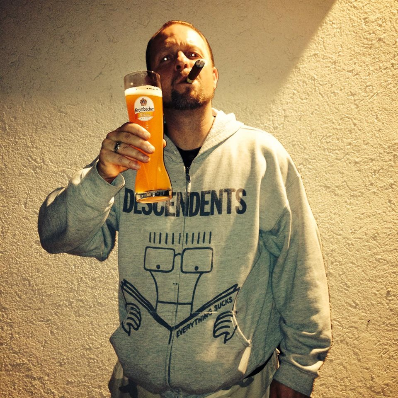 14. What trend in current day hardcore do you wish would just go away already?

Chris: The lack of respect towards people who founded and created this scene and all the stupid tattoos without meanings.

15. What are 3 great things about living in Germany?

Chris: The landscape… From the mountains to the shore it’s clean and beautiful. Of course I love German beer and I kinda like the German mentality of being straight forward and honest... well at least some of us are… Ha! Ha!

16. When you get friends visiting your area who have never been to Germany before where do you like to take them?

Chris: The “Bergpark” in Kassel which just became a world heritage site a few years ago. It’s like the biggest national park in Germany and it has tons of old monuments (like the Herkules) and castles. It’s simply beautiful…you may want to talk to the guys in Agnostic Front or Mike Dijan… I took everybody up there!

17. What was the worst job you ever had in your life and what were your responsibilities?

Chris: I was working at a wholesale company for tobacco and I really hated it. My colleagues kinda sucked – except for one – she was cool. My responsibilities?  Hmmmm, I can’t remember too well because I really didn’t care. What I did was use a glue stick to glue my colleagues pens on their tables… I thought that was funny. I was working there for 6 months – and I called in sick for six weeks (one week per month). I think they didn’t really like the way I was working so they fired me. I already had a new job so that was more than fine with me. 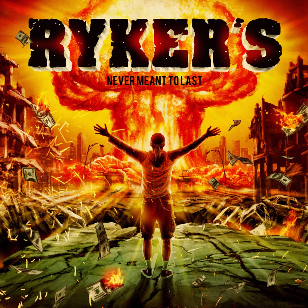 18. Rykers has been a band for almost 25 years now and has had a rocky history over the past few years with ending and then starting again. Being that you are the only original member left what drives you to keep making Rykers move forward and not break up for good?

Chris: Next year we are gonna celebrate our 25th anniversary. Our latest output is called “Never Meant To Last” and that`s really the way I feel. I never thought I would do this for such a long time… but this band became an important part of my life. I still love playing all those crazy shows and hanging out with the guys in the band. We are close friends – like brothers. The good part is that we don’t have to do it. We are not depending on this band… we are still doing it for the fun, and I think the audience can feel it.

19. What was the first hardcore or punk record that you ever bought and what do you remember about buying it?

Chris: Way back then as a kid me and my buddies always discussed who’s gonna order which record… because money was short and we tried to get as many records as possible and then tape them. So we ordered Agnostic Front, Suicidal, Cro-Mags, Gang Green, Attitude Adjustment, Bad Religion, D.I., DRI and so on. The first record I really remember buying at a store was Crumbsuckers’ “Life Of Dreams”.

20. If you were on death row and had one last meal request what would it be?

Chris: An ice cold Krombacher and a cigarette!

BONUS QUESTION... BECAUSE, WHY NOT?

21. What can you tell us about the first ever Rykers show?

Chris: We were supposed to play our first show in Kassel together with D.I. and Leeway in 1992 but that day our singer’s dad passed away – so we cancelled that. A few weeks later we opened up for Slapshot. It was at a youth center in Immenhausen (close to Kassel) which was some sort of mecca for the German scene. The room was packed with over 400 kids and they went ape-shit. That one show really opened all doors for us. We got in contact with MAD Tourbooking and well, it started right there… 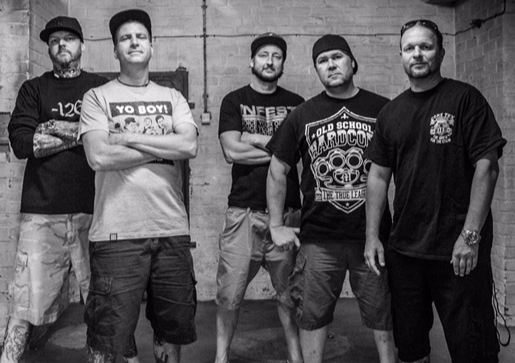