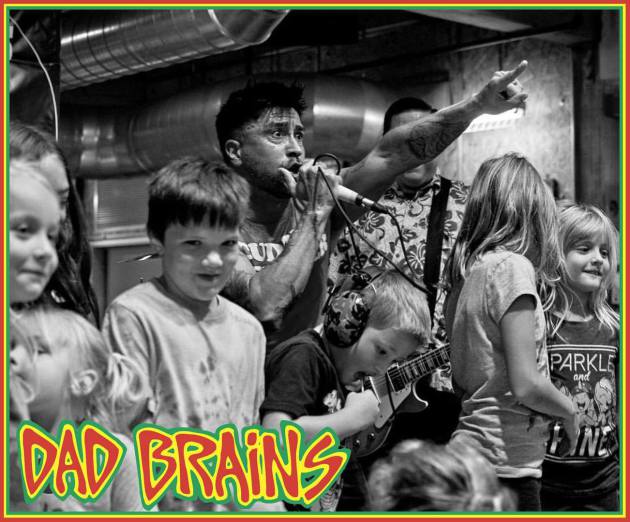 Dad Brains come to us from the Oxnard and Ventura sections of Southern, CA bringing a message that it's not that bad to be an aging punk with young children... or in some ways maybe it is?! Warming up to their style of Parent Core was a slow process at first... but they broke me. Their Christmas themed split with their Philly counterparts in the Ramoms was the real icebreaker as a semi-cover of "Instutionalized" by Suicidal Tendencies won me over. Their songs may be too goofy for some and if you are not a punk rock/hardcore parent their entire existence could quite possibly go right over your head! Did I mention that these guys can shred? All of their members have a nice punk rock resume and the playing on their EP's shows their ability to shred on wax. We shot these questions over to Dad Brain singer Patrick Pedraza in early January and this is what he had to say. The rest of the Dad Brains consist of: Matt Kash-guitar, John Crerar-drums, and Craig Kasamis on bass who along with his wife Rosie just celebrated the birth of their third child last week! 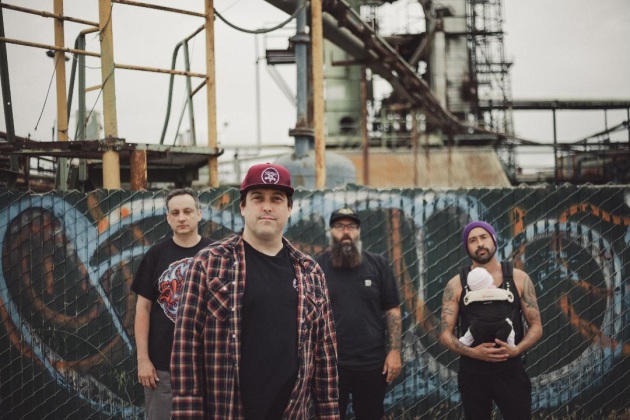 IE: Hey Patrick. Thanks for taking some time out of your day to answer these questions. Where exactly are you right now and what do you think you would be doing if you weren't doing this interview?

Patrick: No problem man! Stoked to do this! Right now I’m laying next to my wife in bed in the dark. I can hear her talking to me right now. Kinda sounds like a muffled voice haha! I promise I’m a good husband....oh wait, I think she just fell asleep. It’s 8:30 pm.

IE: Dad Brains is still a pretty new thing. When did things get started for you guys and how did it all come together? Were all of you already friends before starting the band?

Patrick: Last October (2017) I had my baby girl Violet. I started writing songs in my head about 1-2 months after. I was inspired by all the craziness of having a kid.....Hold on.....my wife just started talking to me... haha! Yup, Matt the guitarist and John the drummer were in punk bands long ago and we used to hang out at a mutual friends house long ago. They were like real punker teens. I just met Craig our bass player about 2 years ago I think. He was in a band with John.

IE: What kind of feedback have you been getting from fans, friends and family to what Dad Brains have tapped into? It seems like you could be a perfect band for others like yourselves in your situation with not as much free time due to the stress of work and raising kids.

Patrick: The feedback has been great so far. Even some non-hardcore listening peeps are digging it! My mom likes our song “I’m Old”. It’s kinda cool because I actually write about real stuff that happens to me daily. It’s sometimes a bit exaggerated, but lots of parents know exactly what I’m talking about. One of Matt’s friends said that “We are a band that helps people blow off some steam.” I think that hits it on the nose. We’re here to make people laugh and feel good. Oh yeah, and we got mosh parts. 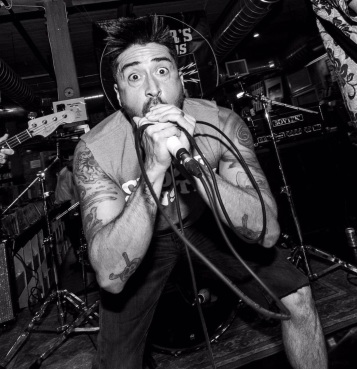 IE: Who is in the band and what bands have they been a part of in the past? Please include how many kids each of you has!

Patrick: I’m actually a drummer and I played drums in the bands No Motiv, Creep Division (with Craig Ahead and the guys from Good Riddance) and also a rock band called From Satellite. I have a daughter. Matt was the bass player in a band called The Missing 23rd, and The Pullmen. He has 2 kids. Johnny was the singer in The Missing 23rd, currently sings for Stalag 13, he’s the drummer in another band right now called Detoxi, and basically the Nardcore scene leader haha. He has 1 kid and probably 5 more bands. I forgot to mention. Craig played in a band called The Wrath, oh yeah! Johnny played drums in that band too!!!!! Craig has 2 kids and one on the way!!!! So by the time this interview is out, he will have 3!

IE: How have the children of your band taken to the music their dads are doing? Any funny stories to share? Can you see the band steering them more into liking this kind of music or maybe having the opposite effect?

Patrick: My daughter was jumping up and down on her jumper to our songs at 6 months old. I was stoked. They all go to our shows. I think they’re stoked?? Haha! You just never know, ya know? Matt’s son Banksy...yeah he named him Banksy... was on the floor when we played a bowling alley doing snow angels...oh man. I can only hope they like punk and hardcore. I actually just wrote another song with these lyrics....”I’ll try and teach her punky riffs, but she’ll probably just like Taylor Swift, so I guess I’ll just deal with it!”

IE: When I initially made contact with you the band had only played two shows. How many are you up to now and can you tell us about the shows you've played to date. Were there noticeable shortages in baby sitters in your area on the dates you played? Haha.

Patrick: Haha! We’ve played 3 shows so far. First was an in-store here in Ventura at Salzers Records. Johnny is the manager so we got the good treatment… chips and salsa and even some La Croix!! Second was the Nardcore bowling tournament. Our last show was at the Viper Room in Hollywood for a Toys 4 Tots benefit. My wife ended up staying home so she was with our daughter! Luckily, our spouses and families are very supportive of the band!

IE: Dad Brains have 3 videos out so far with each one of them showing the Dad Brains fun and light hearted style. Can you one by one break down each of the 3 and tell us a little about the making of each? All 3 seemed like they were a lot of fun to shoot!

Patrick: “I’m Old” We shot this at a friends studio with a local director named Braedon Freeland. I kinda got inspired by the Madball video “Times Are Changing” except, we don’t look that tough and with kids around, we thought it’d be funny. Gotta do that black and white! The kid pit was pretty fun to film also!! 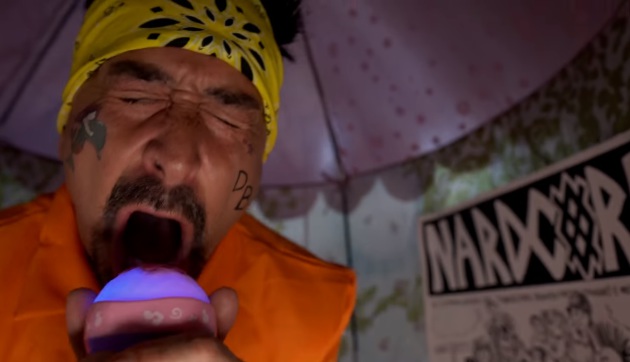 “Baby Jail”  We had so many ides for this one. Time and money were not an option. So I just shot the whole thing in my living room with some old friends of mine with a good camera. I thought...why not shoot it in my daughters princess tent? The total budget for this video was about 50 bucks...that’s with the tent, Disney mic, and jail jump suit. All were bought on Amazon. We got my daughter a cute police uniform to be a baby cop, but she just didn’t wanna be in the video. I was told by her manager that we couldn’t afford her! I can’t believe I said “cute”  What the???

CLICK BELOW TO WATCH THE "IT'S CHRISTMAS TIME" VIDEO

“Christmas Time”  Since we did a Suicidal Christmas parody, we tried to recreate the original in some parts. My good friend Jeremy of my former band No Motiv came to the shoot with his rock climbing gear and thought it’d be a good idea to hang me upside down like in the original. It was on Matt’s gazebo so it was a bit sketchy. I can’t believe it worked out! Our label Pirates Press Records actually made me a custom sweater for the video. That label rules! I’ve had some offers for it already. Sorry, not for sale. 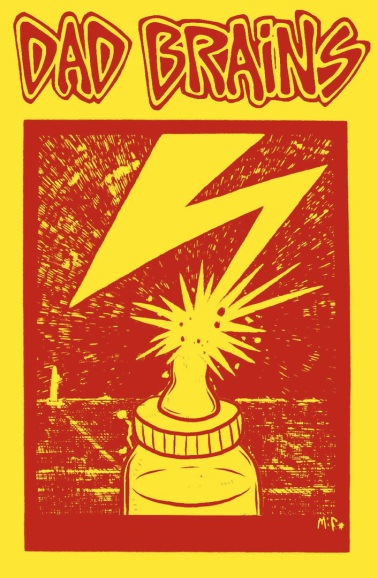 IE: Do the Bad Brains know about the Dad Brains? Have you tried to make contact and if so what did they say/think. Is there any issue with your logos and art on your shirts/records being so close to the Bad Brains ones?

Patrick: I don’t know if they know who we are yet. I’m thinking about making contact but I’m kinda scared to get a cease and desist. Matt came up with the idea so maybe he will get it haha. Hopefully not though.

IE: Whats next? What does 2019 hold in store as far as new music and the possibility of playing out?

Patrick: I would love to play some more shows. Just 1 a month is good for us right now, but if the opportunity comes up to do like a 4-5 day West Coast or East Coast tour with some great bands, that would be rad. We just finished recording 4 more songs that I wanna release in 2019. I’m thinking about a Father’s Day release EP and 7”. I’m really stoked because a producer that I’ve worked with before named Matt Hyde just mixed the songs! I can’t believe he did that for us. He produced and mixed so many awesome records! To name a few, Slayer, AFI, Hatebreed, Terror and Deftones. These new songs sound pretty rad. We’re so thankful for all the help from our talented friends. 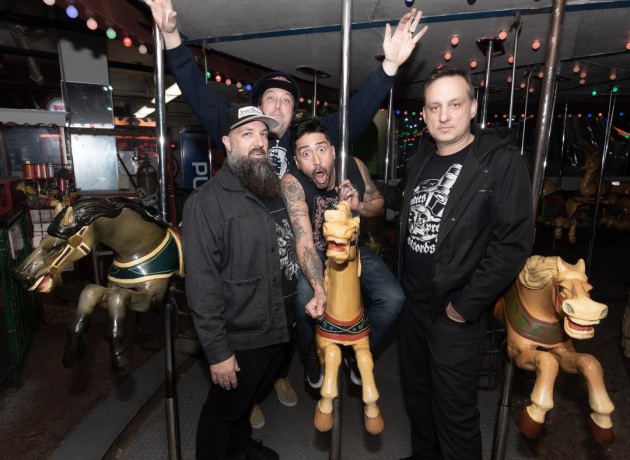 IE: Some quick hits before we go. Least favorite dad chore that you would outsource forever if you could?

IE: Favorite show that you watch with your kid?

IE: Outside of filming a video in your daughters princess tent what is the least hardcore or "tough guy" thing you have done with your kid?

Patrick: When she wears her beanie on our walks, I wear my fluorescent pink one.

Patrick: Wow, I don’t think I’m there yet. It’s kinda funny, we watch a bit of TV, then we go to the iPad and learn colors and sometimes I’ll pop in a Dad Brains or Madball video in there haha! She really likes our “Baby Jail” video because our dog Franky Crumbs is featured at the end.

IE: Favorite toy your kid currently has that you don't mind playing with? 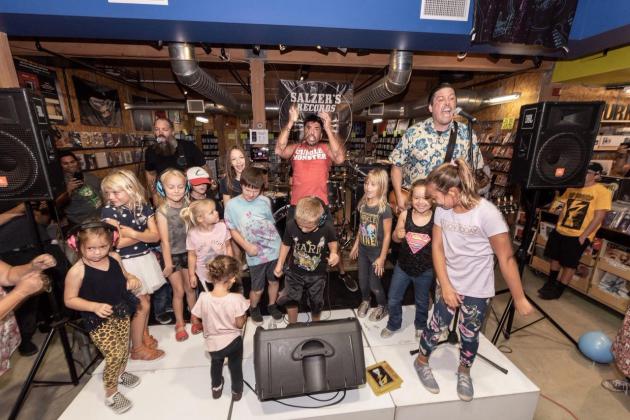