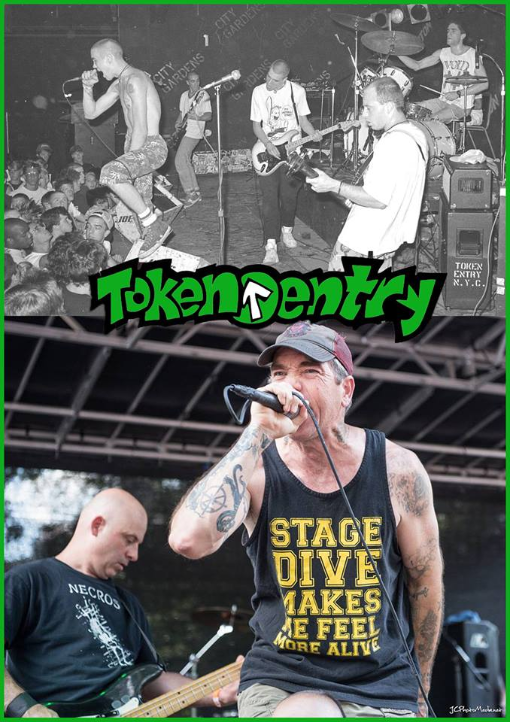 Token Entry were always one of my favorite NYHC bands for a few reasons. Of course they put out two amazing albums in “From Beneath The Streets” (1987) and “Jaybird” (1988). They put on great live shows and knowing they were from nearby Astoria gave me some of that Queens native pride. Like many bands before them and after them they made their mark and faded away into the sunset. Token Entry shows still do happen on occasion but they are always a show or two over a weekend and then they tuck everything back away again. This past July 23rd was the latest Token Entry revival as they got together with other NYHC greats Maximum Penalty, Antidote, Cro-Mags, and Breakdown to help raise funds for their friend Gary “Dr. Know” Miller of the Bad Brains who almost died late last year due to cardiac arrest. The show was held in NYC’s Tompkins Square Park and was free for all to attend. Donation booths were set up and over $25,000 dollars was raised to help Dr. Know with his medical costs. Johnny Steigerwald who co-founded this band when it was originally known as Gilligan’s Revenge agreed to do this interview which was done a few weeks after that historic show in NYC. Joining him on stage that day were his bandmates Timmy Chunks on vocals, Ernie Parada on drums and Jason Lehrhoff on guitar. Above photos by: Ken Salerno and JC Carey. Graphics by: Bas Spierings.

IE: Hey Johnny, just a few weeks back you refueled an old part of your life when you and your band mates in Token Entry played 2 shows. First the benefit show for Dr. Know of the Bad Brains in NYC and then a show the following day in Philadelphia. Please tell us how everything came together.

Johnny: As you may or may not know Gary (Dr. Know) produced two Token Entry albums and had also worked with Ernie on other projects. When the benefit came about it was a no brainer to play. Given all he had done for us and the NYHC scene over the years. Playing Philly was an offshoot of the Tompkins show. Since we were all here on the East Coast we thought we might as well take advantage. The fans in Philly have always been great to us.

IE: When you got to Tompkins Square Park for the Saturday show what was your reaction first to when you saw how many people showed up and then when you actually took the stage and played? Was there any nervousness on your part after being away for so long?

Johnny: I wasn't surprised how many people showed up. It was a great cause with some great bands. The NYHC scene always pulls together when one of our own needs help. Sure I was a little nervous. Token Entry as a band had not played NYC in 21 years and as for me in Token Entry it had been 28 years since I played NYC. It was a show that had come full circle for me. After all it had been 35 years since Ernie and I had played our first show in Gilligan’s Revenge right across the street at the legendary A7 club.

IE: How many rehearsals did you guys have leading up to the shows and was doing a Bad Brains cover ever kicked around as a possibility?

Johnny: We had about 4 or 5 without vocals. Timmy flew in two days before the show and we rehearsed with him Thursday and Friday. We discussed doing some Bad Brains covers for the show and decided to do a few measures of “Jah Calling” which we stuck in the middle of “Revelation”.

IE: Can you get us up to speed with the old members of Token Entry and what they are up to these days? Why was Mick who played in Token Entry in the past not a part of this lineup?

Johnny: Three quarters of us still live in Queens NY. Ernie is in Astoria. Jason is in Long Island City and I live in Whitestone. Timmy lives in Los Angeles. Well, I haven't seen or heard from Mick in 15 years and let's leave it at that. Jason has been with Token Entry since 2008 when we played “Home For The Holidays” with the Bouncing Souls in Asbury Park. He had been with Ernie for years playing guitar in The Arsons, Grey Area, and Higher Giant. He stepped right in and didn't miss a beat. Even though Mick played on “Jaybird” I call our current line up with Jason the “Jaybird lineup” when people ask. I’m happy to say Jason is no fill in guy. He is a member of Token Entry. 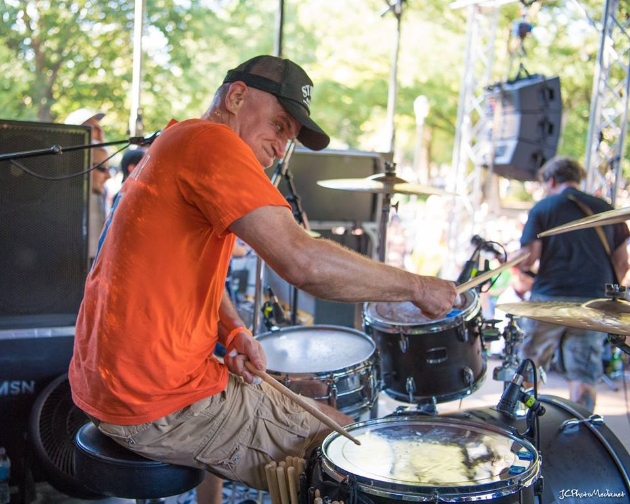 IE: Token Entry has played with the Bad Brains more than a few times in the past and you have a connection with Dr. Know as well with him producing 2 of TE's albums. With that said what is your favorite Bad Brains moment or memories that come to mind?

Johnny: The first time I saw the Bad Brains live at CBGB’s. To this day I've never seen anything like it. Then there were the “Jaybird” sessions with Doc and Jerry Williams aka Jay Dublee (RIP) our engineer. Just the different perspectives he would give us on how to approach each song. He showed us how to make our songs more dynamic. It was really cool to pick his brain. Also the first time we played with them at the Ritz with Supertouch and Murphy's Law. I thought this is it. It doesn't get any better.

GOING WAY BACK WITH TIMMY CHUNKS & TE AT CITY GARDENS IN NJ. PHOTO BY: KEN SALERNO 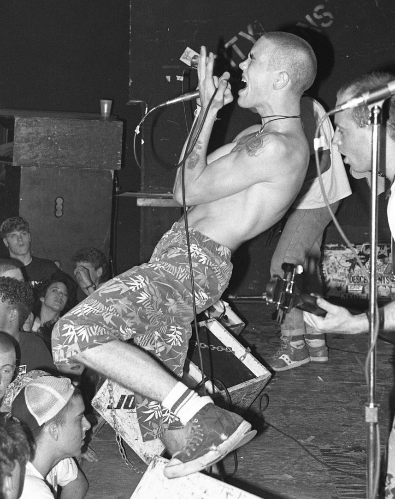 IE: Your time with this band dates back to when it was called Gilligan’s Revenge and had Anthony Comunale (Raw Deal/Killing Time) on vocals. Can you take us back and give us a little insight as to how everything came together with this band getting its start? Who would you say were the major influences on the band back then?

Johnny: It all started when I was 5 and met Ernie back in 1971….this could take a while. But really we were all just neighborhood friends who were all getting into the birth of this new music called hardcore. The original Gilligan’s Revenge lineup in 1981 was Ernie and I, Andy G on guitar (who formed The Devil Dogs later on) and John Pappas a friend of ours on vocals. Ernie actually found Andy in the halls of Art And Design High School. After John Pappas left Eddie Sutton (Leeway) sang with us for one show. Then after Eddie we found this guy from our neighborhood John Wood. Not long after that Andy left. Ditto from Major Conflict was with us for a week or two. Then Mick joined. Eventually we went separate ways with John Wood. Low and behold I found Anthony in Jackson Heights around the corner from where I worked and he told me he went to high school in Astoria and was a huge Gilligan’s Revenge fan. One thing led to another and we asked him to sing. This all happened between late 1981-1983….I think. We were Gilligan’s Revenge until 1984-85 then we morphed into Token Entry...It's all a bit fuzzy.

Back to Gilligan’s Revenge. The first songs we wrote were “Mugged Again” and “Detention”.  Man, at the time there was so much running through our little heads. As kids we just came out of the 70’s and like most early hardcore bands we were groomed on a lot of classic stuff like Sabbath, Zeppelin etc. while separating ourselves from it at the same time. Personally it was the Ramones who early on made me want to play in a band. Hardcore was all so new, so influence is hard to put a finger on because it was happening right under our noses. There were so many bands playing their own interpretations of hardcore. Hardcore at that time was very diverse.

IE: What do you remember from the very first show that Gilligan’s Revenge played?

Johnny: We played A7 with Kraut on November 12th,1982. Details are fuzzy. I think we went on about 10pm. I was the oldest in the band. I was 16. So some conniving went on to fool our parents but that was par for the course for us to even see A7 shows in general. 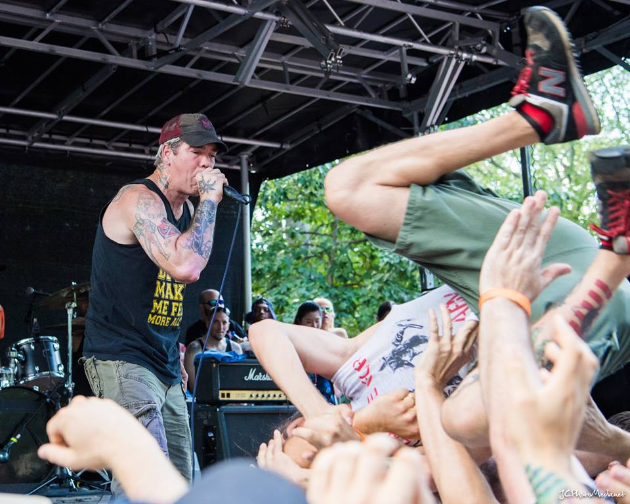 IE: Token Entry were one of many NYHC bands who came out of Astoria Queens in the 1980's. What was in the water back then? Can you give us a little history lesson as to the significance Astoria had on the landscape of NYHC history?

Johnny: You know the story. There was Kraut, Urban Waste, Major Conflict, Murphy's Law, Leeway, my brothers band the NY Hoods, Gorilla Biscuits, Outburst. Actually Queens in general was a hotbed for hardcore. Heart Attack, Reagan Youth, The Mob Antidote, The Misguided, Armed Citizens and then of course Sick of it All. I could go on and on. I always thought hardcore was a suburban thing in general. Most NY bands and kids came from the outer boroughs, Westchester New Jersey and Long Island though we all congregated in Manhattan. It was the same with most scenes around the country. It was mostly all suburban kids gathering in the inner cities getting away from the norms. 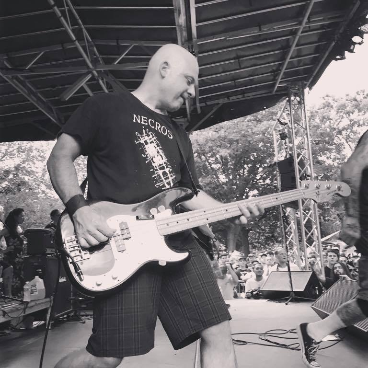 IE: When you look back at the history of Token Entry on a whole what time period was the most fun for you and the rest of the band?

Johnny: Our first tour was a blast. Laughter almost every minute plus that initial taste of freedom. Not knowing what was around the next corner. Playing shows to get gas and food money just to get to the next one. Traveling the country without a care in the world. I'd say overall TE was all a great experience.

IE: Since the time you left Token Entry up to the current day have you been involved with playing with any other bands even if they aren't hardcore or punk related?

Johnny: I've done a few projects since then but nothing really ever took off. I still do jam with friends from time to time just for fun.

IE: What kinds of things would you list as hobbies in your life now and what would 18 year old you think of your current day hobbies?

Johnny: In 1988 after Token Entry initially broke up I bought a mountain bike and threw all my energy into cycling. I raced through all of the 90’s and early 00’s. I'm still an avid cyclist to this day. I love to brew beer and I'm still playing bass. As kids we rode our bikes everywhere so the 18 year old me would love the freedom the 50 year old me still feels on a bike. He'd also love the free beer. 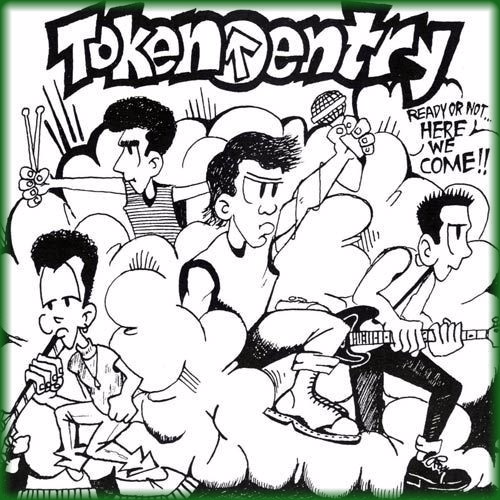