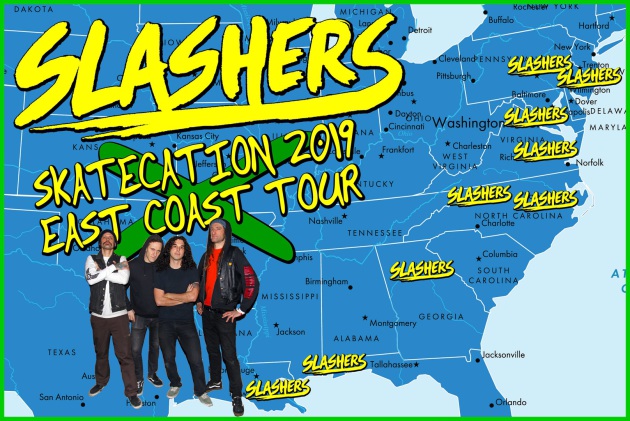 SLASHERS are this really cool 4 piece skate punk band out of Brooklyn, NY. Their fun vibe, shredding style of playing punk rock and their love of skating makes for one killer combination all wrapped up into this special thing called Slashers. They dropped a demo in February of 2017, then their “Not Just Boys Club” EP in February of 2018 and are all set with their debut full length recorded and ready to go. Record labels where are you? We got in touch with Slasher’s drummer Shane who put together this “Skatecation 2019 East Coast Tour” thing which is pretty bad ass. Map graphic by: John Franko. Take it away Shane…

Tour the East Coast in the dead of winter? Sure. Have a record out? Nah. Drums and amplifiers? We will figure it out. Booking agent or tour support? Never heard of it. Bullet proof NYHC skate thrash set? Check. PMA? You know it. Skateboards? Affirmative. Four bros down for anything? Got you covered. Welcome to the Slashers 2019 Winter Skatecation…-Shane 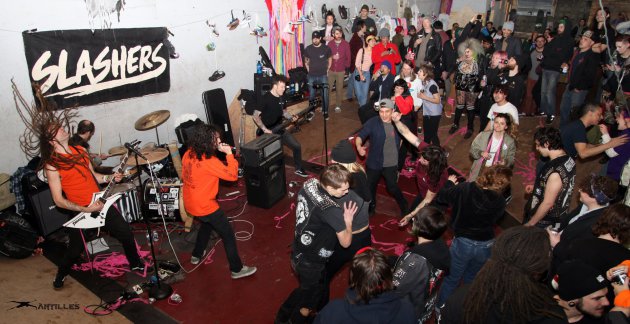 Slashers is: Paco-vocals Jesse-bass Blake-guitar and yours truly Shane-drums... We left Brooklyn at around 4pm on Friday, February 15th to play our first show of the trip at Skate The Foundry in Philadelphia… looking forward to hook up with our friends Trash Knife, Under 95, and Hang Up To Flat. Philly has a great skate/punk scene and we always have a good time there. Skate The Foundry is a functioning skatepark/venue. Did I mention there was free booze? Within ten minutes of our arrival and taking a few runs Blake appears holding his chin with blood leaking through his fingers, "I gotta go to the ER!" A perfect start to night one. Paco and Blake go to get him stitched up while Jesse and I stay behind to skate and do an interview with Josh Derr for In Effect Hardcore. Some time goes by as the guys return with Blake patched up with butterfly stitches and some gaff tape. "They said it was gonna be a 5 hour wait! Fuck that we got a show to play I’ll get stitches after" Yeah Blake! The bands started and it was mayhem from the first note… punks hanging from rafters… slipping and sliding on the now slick skatepark floor. Hang Up To Flat and Under 95 were awesome. Time for our set and it didn't let up… the place was going bonkers. Blake bleeding everywhere and then cutting his hand on a borrowed guitar and bleeding even more. We don't stop… full throttle all the way, and it was a killer first show of the tour. Trash Knife was next and they rocked it hard. The enthusiastic crowd had no downtime. Show # 1 in the bag. Blake got 8 stitches in his lip and chin then we got some shut eye. 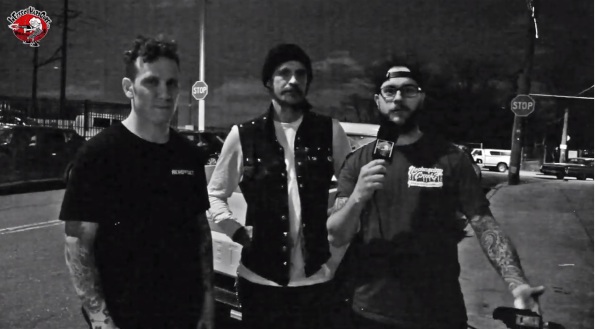 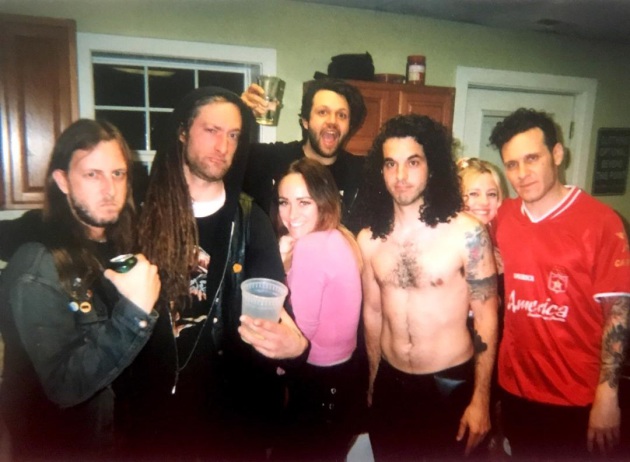 Our next show was in Phoenixville PA which is not too far from Philly so we had the day to skate and do whatever. Lauren the singer of Trash Knife and our hostess with the mostest asked if we wanted to check out the bowl that Carlos and the FDR guys were building at Castle Bam AKA Bam Margera’s house… of course we said yes. Before Bam was world famous he was and is 100% skateboarder. We are all from the same tribe. He was there with his family skating and hanging, nice guy, and down with Slashers. Thanks for the hospitality Bam! We hit the road and stop at one more park and get to the venue where we meet Tony Cadaver who got us on this show with his band The Noid, and Rollin Loaded. This was officially uncharted territory for us. We made a lot of new fans and friends and everyone was super nice. Show #2… Check! 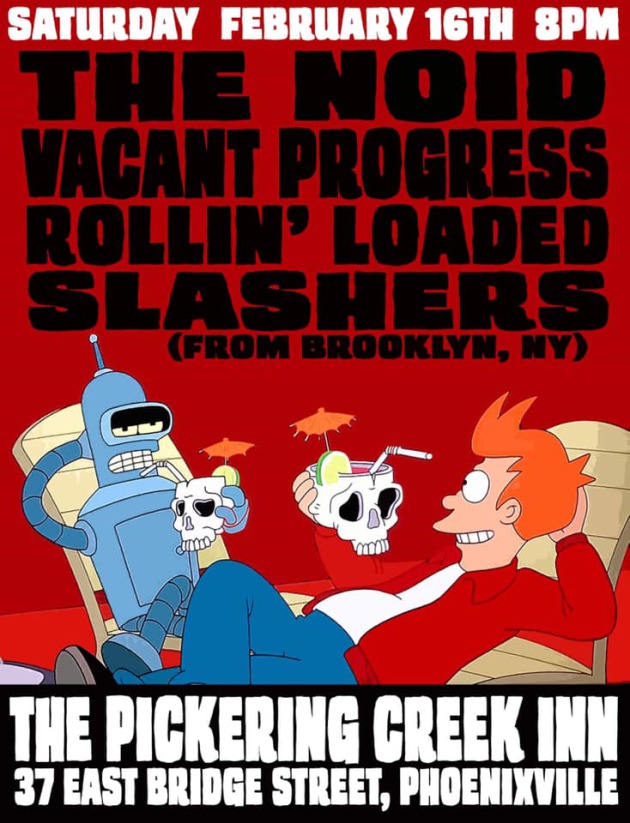 This show was in Washington D.C. at a venue called Slash Run. Cool burger joint/dive bar… skated a park that looked like it was built for a Red Bull event and then they just left it there. Good times. This is the first night where we started feeling "on tour" and some lady called the cops because her chicken wasn't fried. Made some more friends and fans and then kept it moving. Peace out D.C. 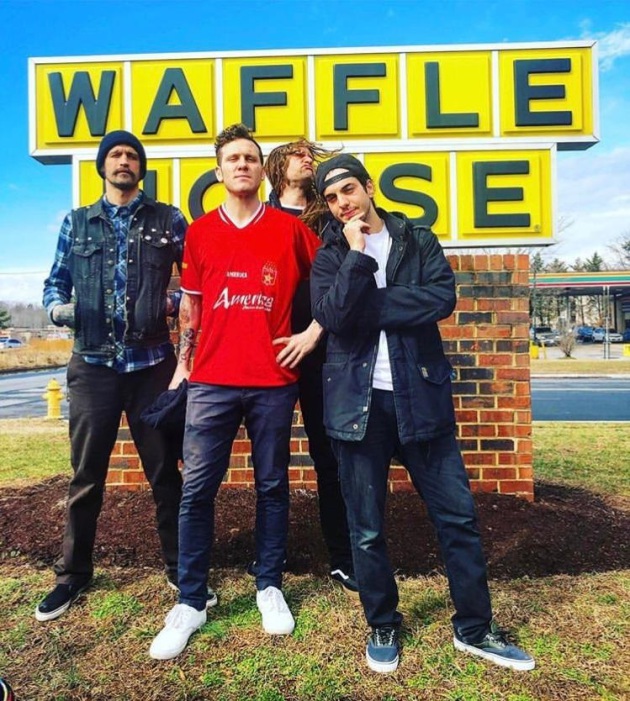 The further we get away from home the better. This night happens to be in Richmond, VA. The world is always changing but one thing that doesn't change is the Primordial Punk House. They are a cultural phenomenon and always welcomed on a tour. No rules rules! Mutual respect is the name of the game and punk houses are a sacred scene. We played with another great band called Loud Night among others and more non-stop action in a converted living room turned venue… no stage, no problem. We set up merch in the kitchen and got treated really well. Thanks Jonah and company!

Today we cross another state line into North Carolina to some more uncharted territory. Stop in Durham, NC and skate this real cool really unique skate park that Paco ripped a new one. The show that night is in Winston Salem at a place called Monstercade Bar that was connected to a barbeque place called Slappy’s Chicken. We ate every meal there for the next 18 hours! Shout out to the staff and Anthony for putting on the show. We played with a really cool Velvet Underground type of band called Future Nature and a psyche surf band called No Whammies. Always good to mix it up. This was a Tuesday night and it was snowing and the place was packed! Nice people and super good vibes. This was when the Southern accents started coming out… were not in Kansas anymore! 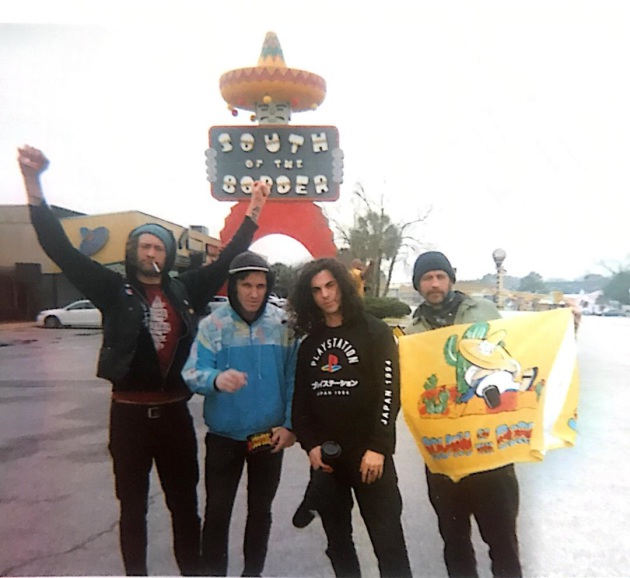 An easy drive over to Raleigh, North Carolina. This show was at a place called Slims Downtown and we were on a two band bill. It was us and a Megadeth cover band called Rust In Peace and they were awesome! What a great wild card. Nice guys too. We even had some homies drive up from Wilmington just for the show. I was hanging out with some local skate kid at the venue and he was saying how there is nothing cool to do there and how psyched he was on the show that night. We came to the conclusion that there is something cool to do everywhere as long as you are not a complete asshole. Thanks Raleigh! 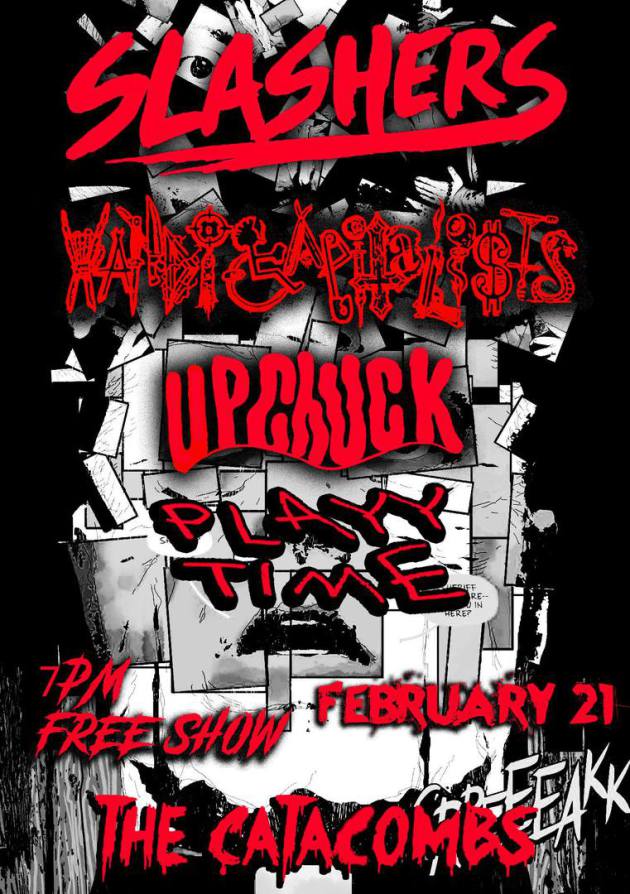 This puts us on a Thursday in Atlanta, Georgia. We are flying in real blind into this one. Turns out to be another punk house and there is already about 100 kids there when we pull up! Plus the weather was starting to get warm! Awesome bands this night too… The Handi-Capitalists, Upchuck, and Playy Time. Very inspiring to see talented younger cats making awesome original music and the whole scene was super mixed gender, mixed age and mixed ethnicities just the way we like it. For every band you could feel the floors bending and by the time we played the entire house was a sweaty bouncing castle! Back lining gear is always a roll of the dice and this night the bass amp crapped out with three songs left, so making the best of it we did our cover of Gorilla Biscuits’ “Hold Your Ground’ with no bass and it ended up being the perfect ending to an action packed set at a punk house in Atlanta!

SLASHERS IN THE ATL. PHOTO COURTESY OF: COLONEL RECORDS 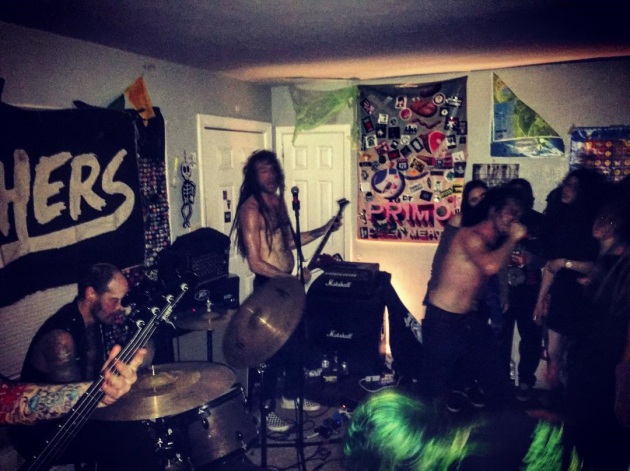 Mardi Gras was started in 1703 in Mobile when it was the capital of Louisiana 15 years before Louisiana was founded. The fact that New Orleans is more associated with the festival doesn't go unnoticed by the locals. Definitely a sense of rivalry. Fast forward three hundred and sixteen years to Slashers playing in the heart of it all. We got there early to the venue, The Blind Mule (where they fed us, thank you Blind Mule) and after some food we hit the streets where the parades were just getting fired up. Drinking drinks and collecting beads and doubloons like some damn tourists arriving back at the venue in all of our shimmering beaded glory. Who the fuck are these guys from NY? Slashers? Never heard of ‘em! This show went through about 3 different promoters by the time it got solidified and we actually ended up playing with a guy from Brooklyn called Abstract Artimus. Turns out he is from Mobile and this was a homecoming for him of sorts. Nice guy. After hanging beads all over the drum kit until it resembled a parade float and some hard looks from the locals we let our set speak for itself and won the crowd over. These yankees done good. 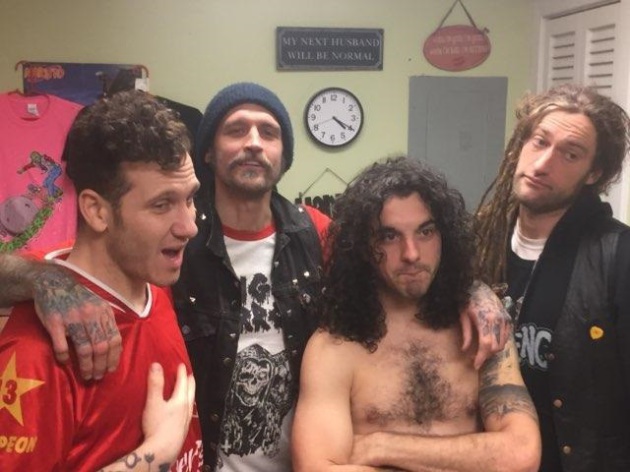 The Big Easy! Mobile being only about 2 hours from New Orleans we got there pretty early the next day and straight to Parasite Skatepark which is a DIY started by the local skaters about 5 years ago and now sanctioned by the city. We met up with our friend Adam aka "The Mayor" and skated for a few hours. We then headed to the venue "Santos" which is right in the French Quarter. This is the first Saturday of Mardi Gras don't forget, and our last show of the trip. We booked this show with our friends Skate Fast Die who are an awesome band and awesome dudes. Turns out our new friend Abstract Artimus was on the bill too along with Son Of A Gun who we played with in Mobile as well. Thanks for providing the backline guys!  A very cool show… skateboarding in the pit is always a good thing! Right after the show there was basically a rave getting started with the two crowds starting to crossover and the vibe got thick. A bunch of drunk French Quarter bro bros and Southern hardcore guys don't mix that well and pretty soon the fists and bodies were flying… it got tense! We got out of there unscathed and made it to our friends’ house that we were staying at… a perfect last show. 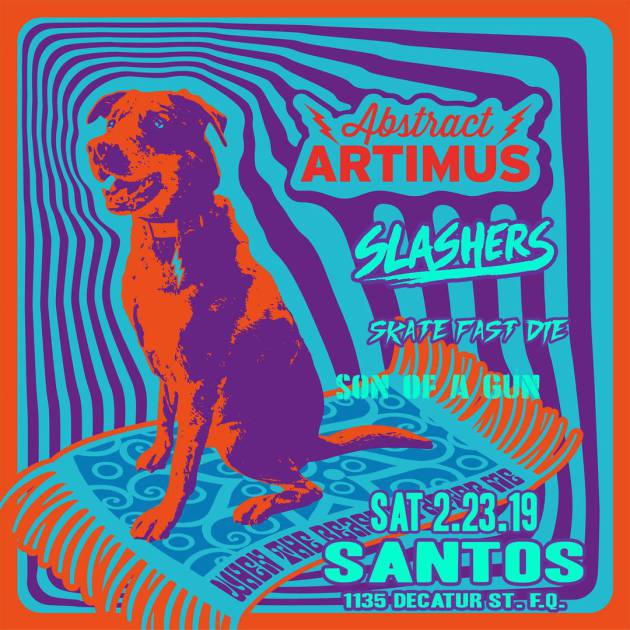 And on the tenth day they rested… well not really… we did intentionally take a day off in New Orleans to hang out. Blake and Jesse stuck around the French Quarter while Paco and I met up with the Skate Fast Die crew to skate the new park in Camelot just outside New Orleans. Unlike Parasite this was in an outside Parrish and it was a lot more sanitized and family friendly… kids with razor scooters, families, day care style. Our crew rolled up to the bowl about 8 deep and cranked up Bad Brains on the boom box and started shredding. The whole park gathered around and it turned into a full on demo with all eyes on our crew ripping the bowl. Parents, kids… it felt like we were in an old Powell Peralta video. Good fuckin times! We went back to New Orleans to meet up with the other guys and kept it in the streets the rest of the night just walking around and checking out live music… New Orleans...CHECK!!! East Coast tour… CHECK!!!

Fly back to NY. YO!! IT’S FUCKIN BRICK! Thanks to all the friends and fans old and new, all the bands, all the venues, and all the positive people that crossed our path. Let’s keep it going! Peace and PMA… -Shane

CONNECT WITH SLASHERS BELOW:

BELOW PHOTOS BY: WEDGE ANTILLES 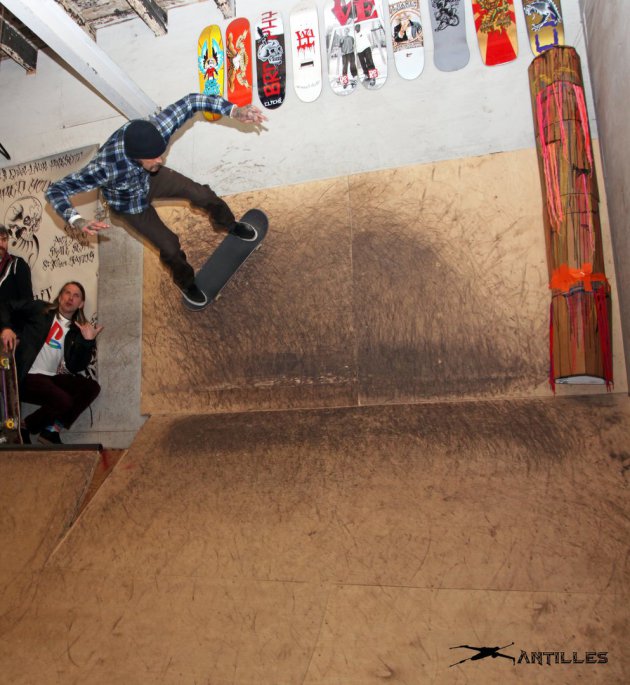 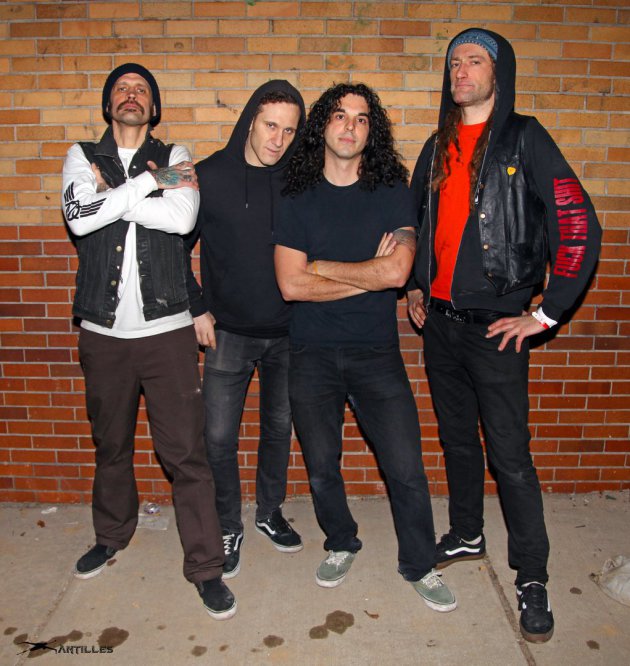 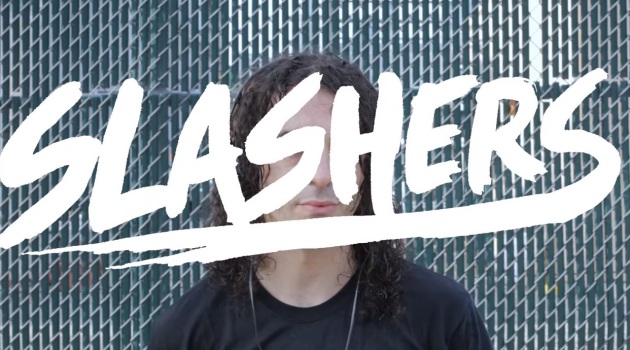