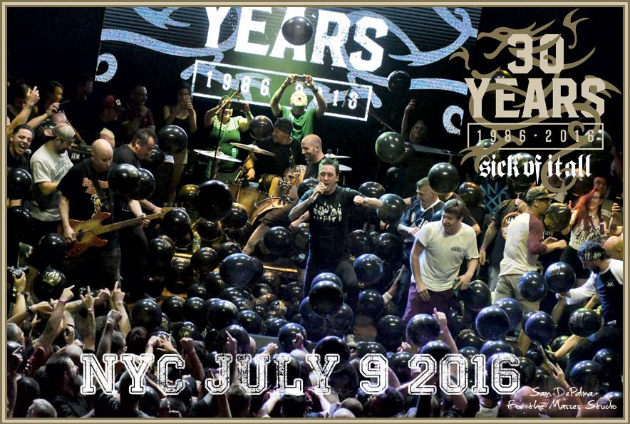 A historic day and night went down at NYC's Webster Hall on July 9th, 2016 as Sick Of It All finished up a short 4 date East Coast tour on their home turf to celebrate their 30th year together as a band. No breakups, no long hiatus at any point... Just 30 years straight through which is unmatched in NYHC and if you give me a list of bands outside the realm of hardcore and punk rock who have accomplished the same I am sure it's not going to be a very long one. 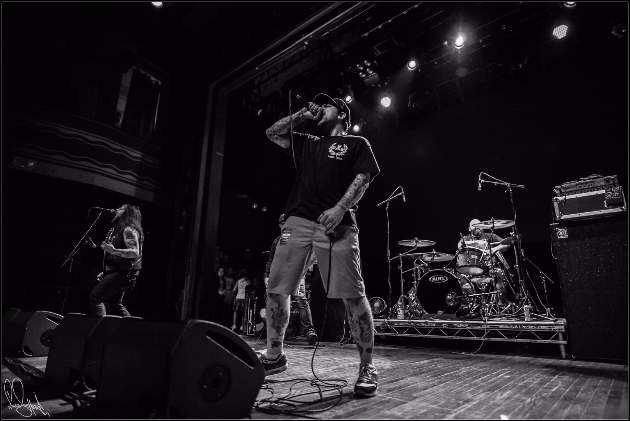 All of the opening bands (outside of Murphy’s Law) played the other 3 East Coast dates (Philly, DC and Boston) and were all selected by SOIA to open for them. First up here was Manipulate who went on a little after 6pm. The crowd still filing in as they cranked into the title track to their latest release "Becoming Madness". This 2 minute instrumental jumps from acoustic tranquility to head smashing brutality and back again in its short run and seemed to be a fitting way to set things off here before working through a good portion of their latest EP... as well as a new still untitled track. Manipulate's band member's resumes include folks with past and current stints with bands like Terror, Backtrack, Kill Your Idols and more and the pedigree shows both in their live sets as well as their 2 recordings. Manipulate shows don't happen often enough and if they did occur more they would quickly get on most people's radars in a hurry as their tracks are that good. Go pick up "Becoming Madness" and find out for yourselves. 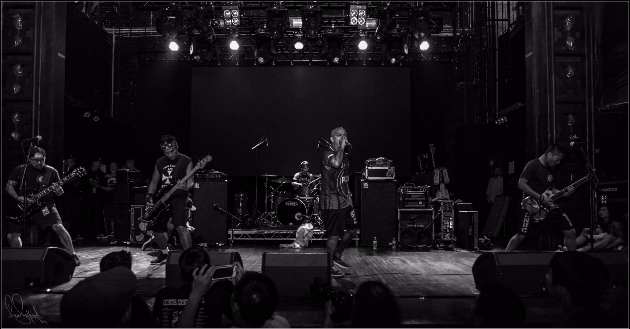 When this mini-tour was announced the name King Ly Chee immediately got my attention knowing they were coming all the way from Hong Kong and are one of the biggest hardcore bands in all of Asia. Wondering how the crowd would or wouldn't warm up to them was something I thought would be interesting going into this show. Their sound is fluid where they can be doing a punk sing-a-long type of song one minute and then back that up with a more traditional hardcore sound with more crunch and bite the next. So before they took the stage the question for me was would they get a smug arms folded NY crowd welcome or an arms wide open embrace type of welcome? From their first track you could see the crowd was receptive and a few songs in you could start to see traces of a pit as the crowd quickly got into what they were doing. 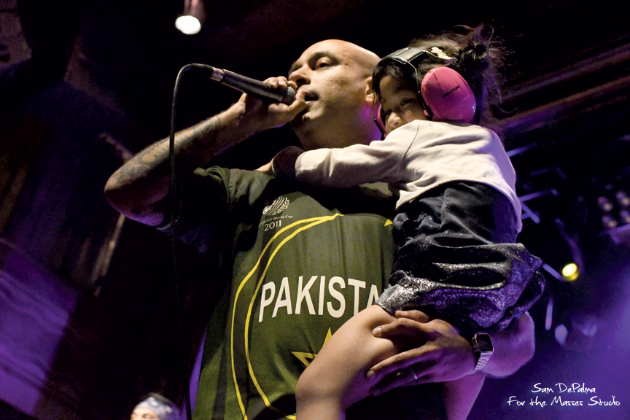 At one point their vocalist Riz who is a Muslim of Pakistani decent swooped up his daughter from the side of the stage and praised many things he and his band had done and seen on their short trip in the US and added "I want you all to remember these two faces. These are the faces of Muslims and we're not here to hurt anyone". In light of the current fucked up state of the world just let that sink in for a minute. Musical highlights for King Ly Chee came more towards the end of their set and included their version of "Scream For Life" which is a cover song originally done by the Chinese punk band SMZB... and "Lost In A World" which they concluded their set with to a loud ovation by a crowd they just won over. Welcome to NY King Ly Chee. 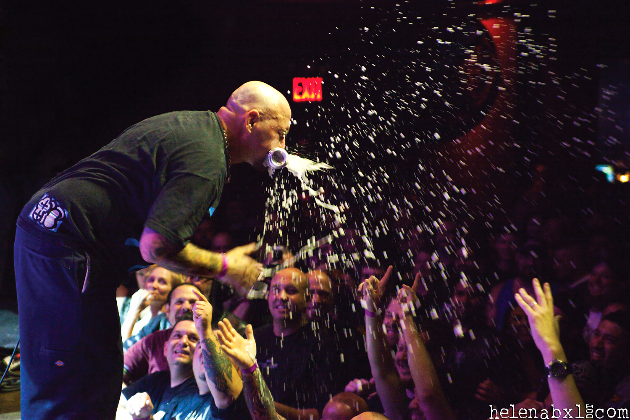 Murphy’s Law being on this bill added that special something to an already stacked lineup. Close to 30 years earlier Jimmy G along with earlier lineups of this band would simply come in here and own this same room which back then went by the name The Ritz. For this night they came out with the intro from "Back With A Bong" and then right into "Quest For Herb" off of that same album from 1989. The smell of weed was all around me probably because someone I know (and who will remain nameless… CB)  found it to be the perfect time to get his blaze on. From the start of that intro to the finale in "Care Bear" Jimmy and crew showed they can still own a room. 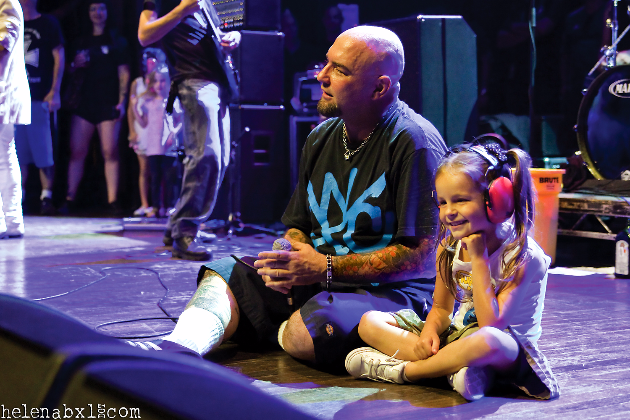 From his signature bottle of Jagermeister in hand to a yellow garbage can filled with Pabst Blue Ribbon which was "shared" with the audience Murphy’s Law showed everyone that they can throw a NYHC party like no one else even enlisting some of hardcore's future into the mix. At one point between songs Jimmy was sitting down in the middle of the Webster Hall stage having a quick chat with 5 year old Ella whose parents were nearby and a few songs later he started up a chat with 8 year old Tristan who was also on the stage, and who in turn turned out to be a bit of a comedian. When Jimmy told Tristan to sing "Poopiehead" the young kid rolled with it and just made up words making for some pretty funny moments. At the end of this make shift track Jimmy would go on to say "I think we've found my replacement... see ya in 16 years". Great stuff, all in good fun anddddd with full ear protection on those kids too for those waiting to pounce on the parents. Haha. We got to hear "Cavity Creeps" with the intro to "We Gotta Know", we sang Happy Birthday to Sick Of It All, and heard Jimmy make fun of Craig Setari's bass. The ice from that garbage can of beer was dumped into the crowd for the final song as Murphy’s Law wrapped up their set which ran for about 40 minutes. Murphy’s Law needs to be on more high profile shows like this. 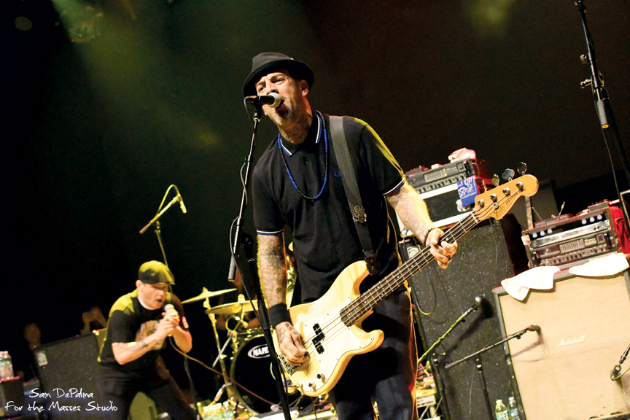 Boston's Street Dogs followed and when they came out they had the look, feel and sound of a professional band that has been around the block a few times. I knew the name but never heard their music before this experience. They started in 2002 and have Mike McColgan who used to sing for Dropkick Murphys on vocals. SD plays catchy punk with some bite that was easy to absorb and they put on a good set here. For being the first time seeing and hearing this band I can honestly say I enjoyed their set. The crowd response was solid and Mike climbed to the top of their amps at one point which left him maybe 20 feet above the Webster Hall dancefloor in a “that motherfucker is crazy” moment but as their set moved along I looked at my watch which said it was close to Clobberin Time.

SICK OF IT ALL. PHOTO BY: RICH ZOELLER 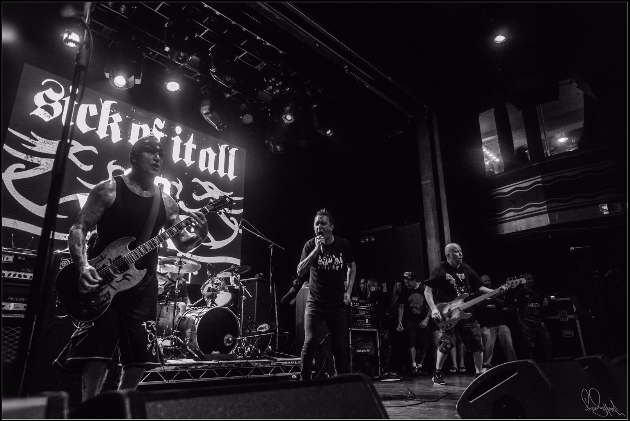 While the stage got set up for Sick Of It All you could see the crowd size swell and feel an almost electric like atmosphere in the room which is listed as having a capacity of 1500 people. NYC is where Sick Of It All is from and after doing this for 30 years it's safe to say they probably had ties and connections with the majority of the people in attendance. What started off as a small band made up of some kids from Flushing Queens is now this worldwide hardcore phenomenon that shows no signs of slowing down. Their latest album "The Last Act Of Defiance" which came out in late 2014 is proof of that. They opened with "Injustice System" which led into "Clobberin' Time" with a sellout crowd matching the intensity of the band for the entire hour they were given the stage. 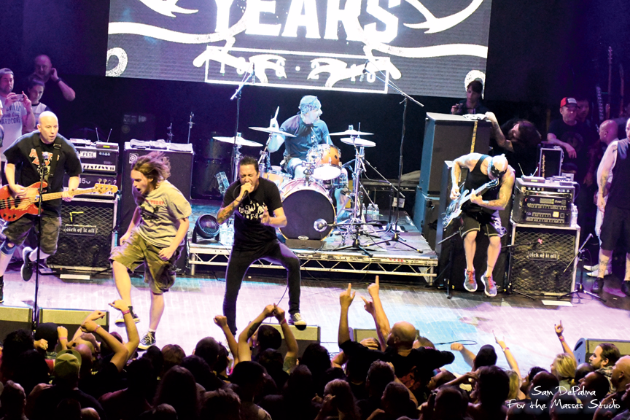 When you have as many releases as these guys have under their belts it must be hard to nail down a set list that is going to please everyone and they did their best of mixing the old with the new. Newer tracks like "Road Less Traveled" were backed up by older ones like "My Life" and "Rat Pack". "World Full Of Hate", "Sanctuary" and another of the newer tracks "DNC" were clustered together midway through their set with the crowd slowing down for absolutely nothing the entire way. As Sick Of It All's set moved along there was just this feel where you knew you were watching something that you weren't going to forget anytime soon. The band gave the crowd a lot of respect back thanking them for their ongoing support and at one point thanking them for making them a full time band with members who have not had real jobs since 1997. "Scratch The Surface" led into the cover of "Straight Ahead" which they have adopted as their own. As we headed towards the home stretch we got another cluster of golden oldies with "The Deal", "GI Joe Headstomp" (all-time great title) and "Friends Like You", all of which appeared on their 1989 debut full length "Blood, Sweat, and No Tears". 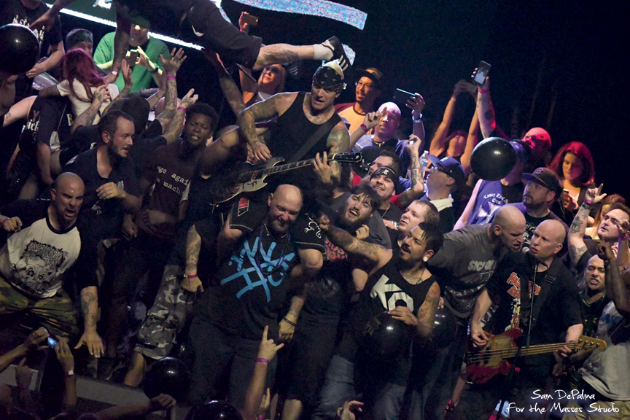 With their hour long set winding down frontman Lou Koller told the crowd, "Everybody... this is it... get your money's worth" as he screamed out the title of "Step Down" and held that scream for about 4 or 5 seconds as a shit ton of black balloons started to fall out of the ceiling. By the end of this song the stage was completely engulfed with people singing along with Lou and the rest of the band disappearing into the mob that now took over the stage. Bassist Craig Setari emerged on Jimmy G's shoulders being carried around for a few moments as the track ended. From there it still wasn't over as Lou introduced his bandmates for a few minutes and then they busted into "Built To Last" as their closing number and this time guitarist Pete Koller went for a ride with Jimmy G. When it was all said and done I didn't want to leave. I walked around trying to make the night last just a few more minutes. Many people were walking out with the balloons still inflated that had the Sick Of It All 30 years logo on it. Definitely a night that will go down as an all-time classic in the NYHC’s history books. Hardcore's dead? Think again buddy. Thank you Sick Of It All for flying the NYHC flag worldwide for all this time and to the opening bands that contributed to the fun. -CW June, 2016. 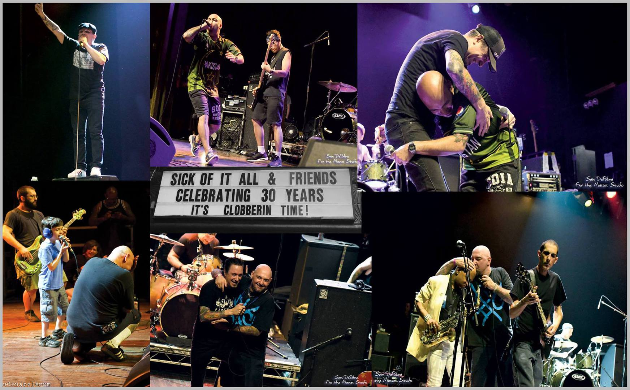 Thank you as always to the hard working photographers that do the bulk of their work after the show is over. They often take 100's of photos at any given show and then spend hours sorting through them afterwards doing editing to get them just right. I am sure they all have stories where their work has been lifted without permission and sometimes their logo/watermark removed without their approval. Fighting it is even more time consuming and often a waste of time. Click the links below to get in touch with the photographers who have photos used in this article. 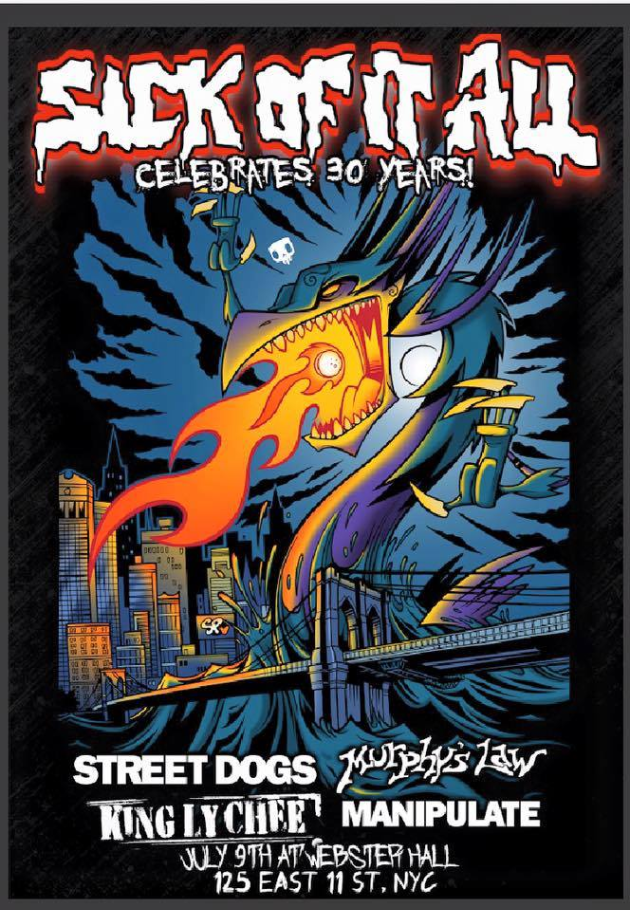