DOWN TO NOTHING, BURN, & MIZERY

REVIEW BY: GAVIN BROWN. ALL PHOTOS BY: AGA HAIRESIS 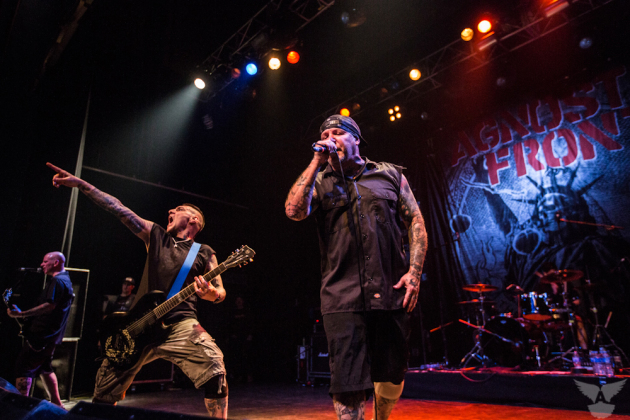 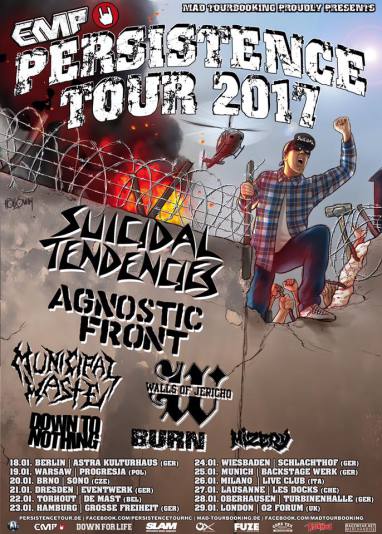 The Persistence Tour has been running across Europe since 2005 and in its decade plus run has featured the likes of SICK OF IT ALL, MADBALL, H20, RYKERS, IGNITE and D.R.I. amongst many others and continues to bring a mixture of the established and even legendary to newer bands spreading the hardcore vibe to venues across the European continent. The 2017 installment was no exception with the emphasis on the legendary bands really stepped up on this run with SUICIDAL TENDENCIES headlining a bill that featured AGNOSTIC FRONT, MUNICIPAL WASTE, WALLS OF JERICHO, DOWN TO NOTHING, BURN and MIZERY. This bill was primarily hardcore but this was varied a little with some crossover and metallic hardcore influences from certain bands and every band from Suicidal Tendencies on down certainly gave their all on this, the last night of the European Persistence Tour 2017.

As the Forums doors opened up and fans started to get their places on the dance floor and up front, it only took one look around at this massive venue to see that this kind of music can still pull in huge crowds and from what I heard, the majority of shows on the tour were sold out and it was great to see such a cross section of hardcore fans of all ages in attendance. With that said looking up and seeing a vast seated section in the balcony filling up with fans looking down on the main floor did feel a bit strange for a hardcore show, especially with them feeling so far away from all the action. 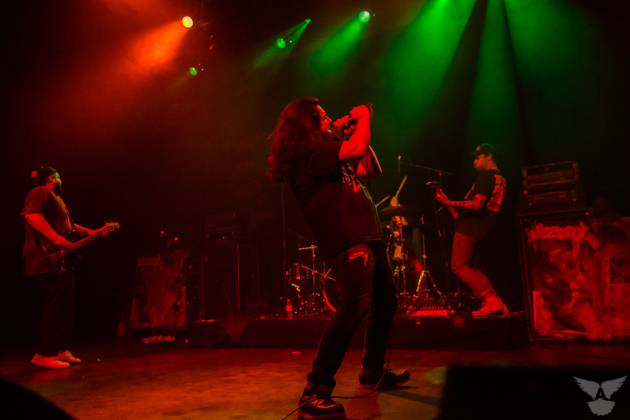 MIZERY opened the show and hit the ground running to a rapidly growing audience and those down front showed their appreciation of the band with a demonstration of energy that matched that of frontman Jose Gonzalez. Tracks from their latest album “Absolute Light” were as rapturously received as the older tracks like “Survive The Vibe”. Their brand of metallic hardcore (think Suicidal with a Leeway/Cro Mags vibe in there and plenty of chunky, metallic riffs throughout) got the night off to a great start and bode well for a great night of music. 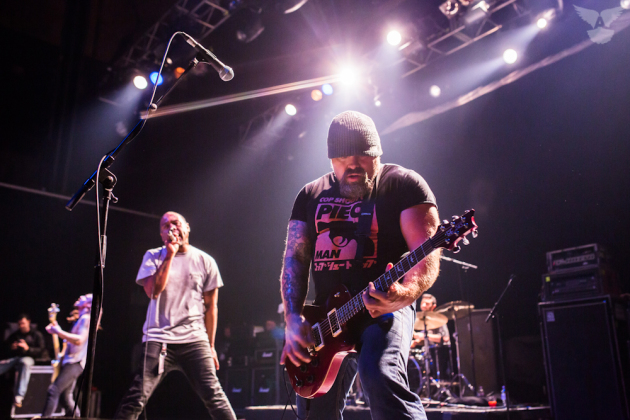 The long awaited return of BURN was up next and they didn't disappoint with their style of progressive hardcore and this reunion show (which is only their third British show ever) delivered everything we could expect from the band. With an EP out last year and a hotly anticipated new album forthcoming in the coming months, the band seem extremely reinvigorated and this was evident in their performance. Chaka Malik is still a formidable and energetic frontman and spent the bands set engaging with the crowd and getting them fired up while roaring out the lyrics to well received anthems like opening number “Cleanse” and then again with “Drown”. Chaka is ably backed by the rest of the band  with guitarist Gavin Van Vlack delivering the riffs aplenty and the newer rhythm section (of bassist Manny Carrero and drummer Durijah Lang) hitting that Burn groove perfectly. Signing off with a furious ...”Shall Be Judged”, Burn delivered a powerful set and were treated like returning heroes. Let's hope they return again to these shores later on this year for a full tour.

DOWN TO NOTHING. PHOTO BY: AGA HAIRESIS 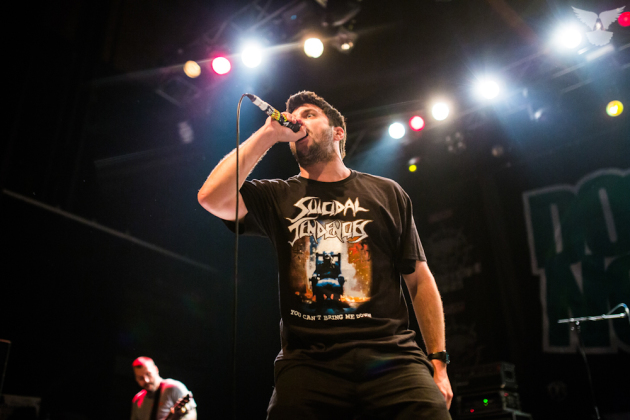 DOWN TO NOTHING followed and their foreboding brand of hardcore further set the dancefloor alight with an energetic display from both the band and the crowd. With a new album out later this year, the band teased some new material and older tracks, especially a crushingly intense “Conquer The World”… all of which were received enthusiastically. Frontman David Wood was a fiery and lively presence throughout their set and whipped the crowd up into a frenzy, paying tribute to the rest of the bands on the bill and leading in the chant of ST, ST in homage to the headliners tonight as the rest of the band smashed it up on stage. Down To Nothing left the stage knowing they had made more than a few new fans in London tonight. 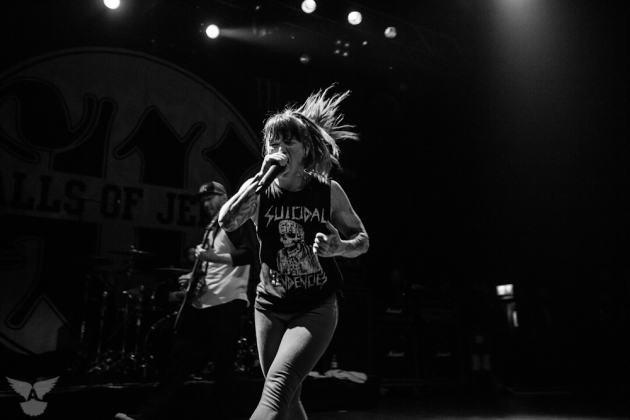 WALLS OF JERICHO explode onto the stage and take no prisoners from the off with a huge circle pit opening up at the behest of vocalist Candace Kucsalain. Their metallic take on hardcore goes down well with the now capacity crowd and they respond with a furious bout of dancefloor action with songs from the band’s new album “No One Can Save You From Yourself” going down particularly well, with “Relentless” and the album’s title track proving to be highlights. The band genuinely paid tribute to the rest of the bands and the family vibe of the tour and sign off a frenetic set with a monstrous version of “Revival Never Goes Out Of Style” from their “All Hail The Dead” album that sees Kucsalain deliver her vocals in the crowd to a rapturous response. 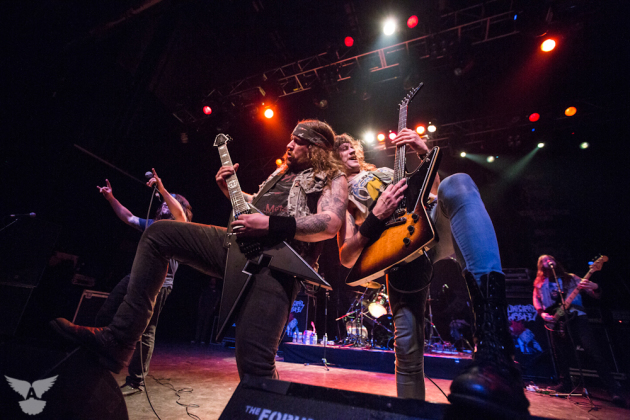 MUNICIPAL WASTE are the most metal band on the bill but have such a big hardcore and crossover influence in both their music and presence on stage that they don't feel one bit out of place. From the opening notes of their first number, “Mind Eraser”, the Forum exploded in a relentless and blurry mix of slam dancers and crowd surfers and this doesn't let up until the band leave the stage. Songs like “The Thrashin’ Of Christ”, “Beer Pressure”, “Slime & Punishment” and a Trump baiting “I Want To Kill The President” (one of a number of anti-Trump statements tonight) are packed full of energy as the crowd has the time of their lives as they're being played. Frontman Tony Foresta (clad in a Burn shirt) might be full of the flu but doesn't let this disrupt his or the bands performance and their set flies by in a flurry of riffs and energy. The band are tight with the twin guitars of Ryan Waste and Nikropolis churning out those riffs, Landphil laying down a heavy groove and Dave Witte showing why he's one of the most respected drummers in heavy music. Foresta pays tribute to Suicidal and AF by declaring "If it wasn't for Agnostic Front and Suicidal, we wouldn't be on this fucking stage" and as they bow out with their signature tune “Born To Party” (with its "Municipal Waste are gonna fuck you up" refrain) everyone is left satisfied with what they've just seen. 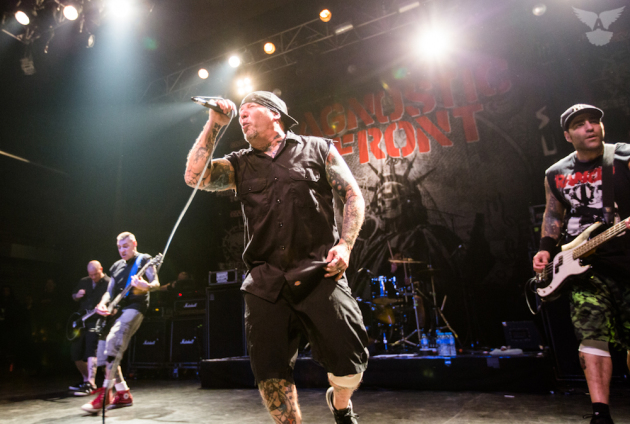 The majority of bands would have struggled to follow what had gone on before them but the majority of bands are not bonafide New York Hardcore legends like AGNOSTIC FRONT and as they emerge from the side of the stage following their trademark “The Good, The Bad And The Ugly” intro… Vinnie Stigma with his guitar raised aloft, they are treated to a heroes welcome that defines the word rapturous. The band blasts straight into the immortal sounds of “The Eliminator” and what follows is a history lesson of some of the greatest anthems that hardcore has ever known. From “Friend Or Foe”, “Crucified” and “Victim In Pain” to “Old New York”, “For My Family” and “Riot, Riot Upstart”, they're all ignited with the same passion as they always have with Roger Miret's passionate vocals getting the crowd going. Stigma does as Stigma does, hyping up the crowd throughout and they love him for it aided on guitar by Craig Silverman while Mike Gallo and Pokey Mo prove why they are one of the most formidable rhythm sections in hardcore. A fan is brought up from the crowd to sing “Police Violence”, old friend Mickey Fitz from The Business is remembered by Stigma and Chaka from Burn gets up to sing a furious and anthemic version of “Gotta Go” with the band before finishing the song in amongst the audience in a set that is celebratory and shows how loved the band are here in the UK.. Agnostic Front finish with their cover of the RAMONES’ “Blitzkrieg Bop” dedicated to the band themselves and everyone is left with a huge smile on their face at witnessing these legends again. 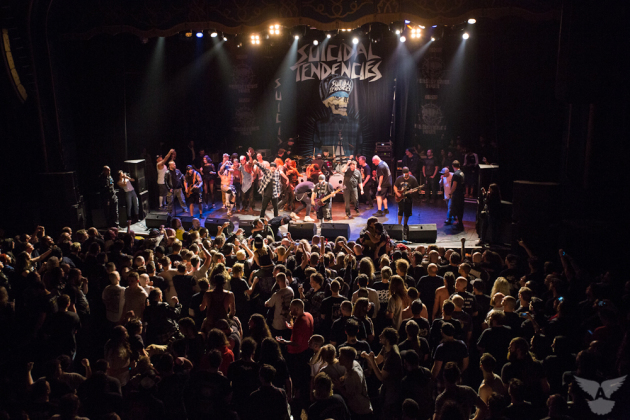 If the night had ended there it would've have been worth it but there was one band left tonight and that band was SUICIDAL TENDENCIES. The Venice Beach hardcore icons are reinvigorated with both a brand new album in last year’s “World Gone Mad” and a new lineup that includes the powerhouse that is drummer Dave Lombardo. As darkness cloaks the stage, the intro to “You Can't Bring Me Down” blares out and suddenly explodes with light as the band emerge with the energy of bands half their age and crash straight into this opening number. Legendary frontman Mike Muir is last on stage and doesn't stand still until the song is over barking the songs lyrics with a display of infectious vigor. Classic after classic follows with the likes of “War Inside My Head”, “Trip At The Brain” and of course “Institutionalized” which are met with an enthusiastic response and the material from the new album goes down well too.

This new lineup has reenergized the band with Muir (who was a thrilling and hilarious presence all night, regaling the crowd with tales from Suicidal’s history) and longtime guitarist Dean Pleasants bolstered by the arrival of Lombardo, bassist Ra Diaz and rhythm guitarist Jeff Pogan who all deliver great performances tonight. As the band launch into “Possessed To Skate”, members of the audience climb onto the stage to dance and sing along which adds to the fun the band are having on stage and continues through the rest of the set with even a couple of stagedivers launching from the epic Forum stage into the crowd with admirable precision which only adds to the atmosphere. As its the tours closing night, members of the other bands gather onstage to salute the audience and the whole event has this family like vibe. ST wound down their set with “Subliminal”, an extended version of “I Saw Your Mommy” and “Cyco Vision” before ending the night and the Persistence Tour with an epic version of “Pledge Your Allegiance” and leaving the stage to mass applause. Tonight was a night that showed off the power of hardcore music in all its various forms and was a show that should live long in the audience’s hearts as well as their minds. 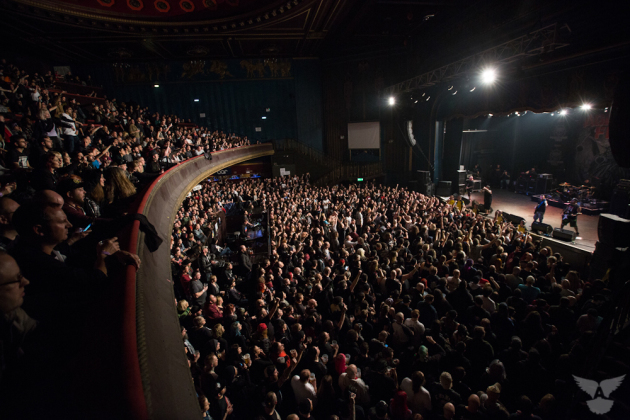