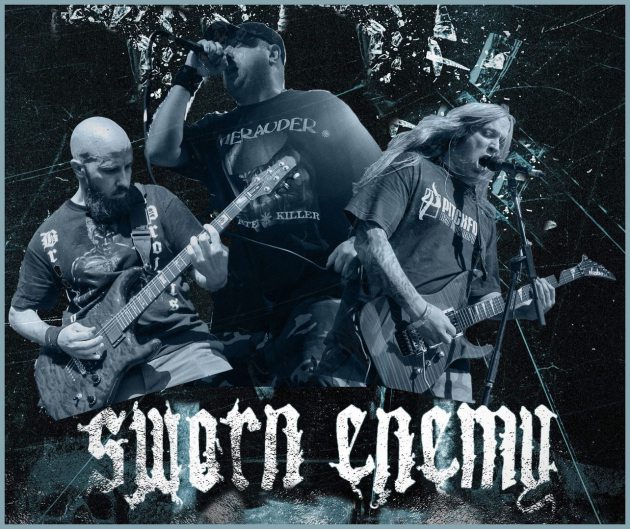 It’s been a few years since we got a new SWORN ENEMY full length but the wait is now over as their new album “Gamechanger” is officially out as of April 5th. This Queens, NY band has been at it since the early 2000’s delivering a brutal musical assault that is probably too metal for a lot of the hardcore kids and too hardcore for the metal kids. Good music is good music and “Gamechanger” just has this BIG monstrous feel to it. In Effect’s Brian Espitia set this interview up and got on the phone with Sworn Enemy frontman Sal LoCoco on March 31st to talk about the new album as well as tour plans for the rest of 2019.

IE: We’re here with Sal from Sworn Enemy. Sal, you have a new album coming out on April 5th. It’s called “Gamechanger” and it’s been five years in the making. What was it like to work with Rob Flynn of Machine Head who produced the new album? How does that happen?

Sal: It was a different experience for us as a band. We weren’t used to the routine that Rob was going to put us through, and it took a couple of days for us to actually kind of warm up to his tactics, what he uses and how he wants things done. But whatever the case may be… at the end of the day, the product that we put out, I am 100% happy with. Actually, I’m 150% pleased with it. So, I don’t care how or whatever he did to get us through this record. It worked and I think we’re a better band for it, and we put out a fucking amazing record. I’ll be honest… I would definitely work with that dude again because he got the best out of us. Obviously, it wasn’t an easy experience. It definitely wasn’t, but you know what? Sometimes you got to tough it out and you work harder for something and the final outcome is that much better. You reap the fruits of your labor.

IE: Yeah, nothing great ever came out of getting shit handed to you. So exactly what is different about him from any other producer you worked with?

Sal: He’s like a fucking Army recruiter dude! Yeah, he just kind of lays it all down and this is how you’re going to do it! 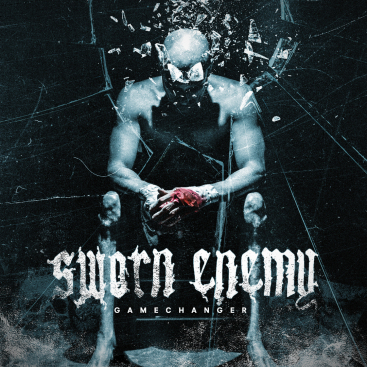 Click above to stream the new Sworn Enemy album "Gamechanger"

IE: Well, the production on this record is some of the best that I have heard in a long time. Obviously, the engineering and mixing go along with it. Specifically, from an engineering standpoint, this is the best engineered and produced hardcore record that I’ve heard all year.

Sal: I’m going to agree with you. Zack Oren (engineer) is amazing! That dude records all the Machine Head records. You listen to these records and they sound thunderous. It sounds so big. You can put our CD in, and listen to another CD and you’ll hear that ours sounds like it is in the stratosphere. Theirs sounds like it’s in a box.

IE: Yeah, it definitely projects. You can hear it in your vocals especially. That was my favorite part about it. I didn’t think that you would put out a better record than “As Real As It Gets”, but you did! I was wrong.

Sal: I agree with you on that. I think that this is the best record that Sworn Enemy has ever done.

IE: Yeah, I’m not going to argue that one. Really, it is good, so congratulations on that. My next question is the long gap between records. Is it planned like that? Do things happen where you have to put the project down for a while? Is it not a full-time thing anymore?

Sal: Obviously, it’s not a full-time thing anymore. We don’t tour as much as we used to. Everybody is a bit older and have jobs and shit. Family and those things make it really difficult. But in between the process of getting to this point, it does take a long time. We were still gelling as a band. The five of us were still learning each other’s ways. Like Matt, Jess and Mike coming together as a unit writing music that is Sworn Enemy. We still didn’t have that yet. When we wrote “Living On Borrowed Time” in 2012-2014, it’s a good record, but to me it’s not a real good Sworn Enemy record. It’s like this one… we put so many shows under our belts as a unit. As this unit. This is the unit now. Me, Mike, Jess, Matt have been together since 2010. Now we are starting to feel it as a band. Like, we are a legitimate band now and we feel each other. We vibe with each other. It took us a while to get there and I think the final piece of the puzzle was Taykwuan. He joined the band right after we put out “Living On Borrowed Time”, and this kid’s drumming is fucking insane. He’s a super great drummer and he’s a death metal kid. He does blast beats and double bass, shit like that, but there isn’t any music that he can’t play. His hardcore chops are unreal. 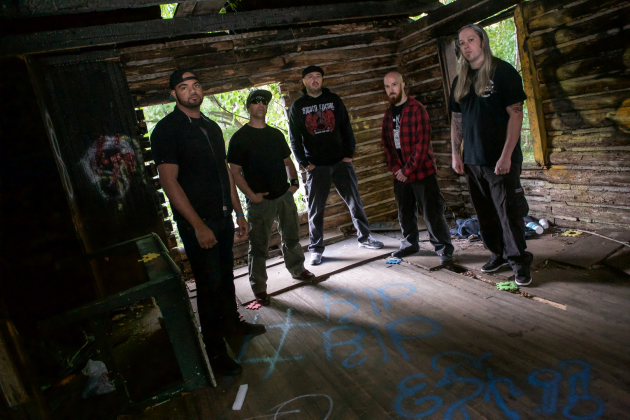 IE: Well, if you get a good death metal drummer, you pretty much can do anything. You got all bases covered right there.

Sal: He loves death metal. He loves slam. That’s what he loves. He loves the slam of death metal and that’s why he works with us… because we got breakdowns too. Sworn Enemy always had breakdowns. So, it works for everybody. He was the final piece of the puzzle that we were looking for. The drummer that was going to put us over the top and now this is a well-oiled machine right here.

IE: I hear that. I’ve played in bands and lineup changes always drove me nuts because it’s almost like starting over again just to get to where you were. So, when you get a solid lineup going and you can evolve, that’s when you’re going to put out your best shit.

SWORN ENEMY @ THIS IS HARDCORE FEST 2018. PHOTO BY: DANIELLE DOMBROWSKI 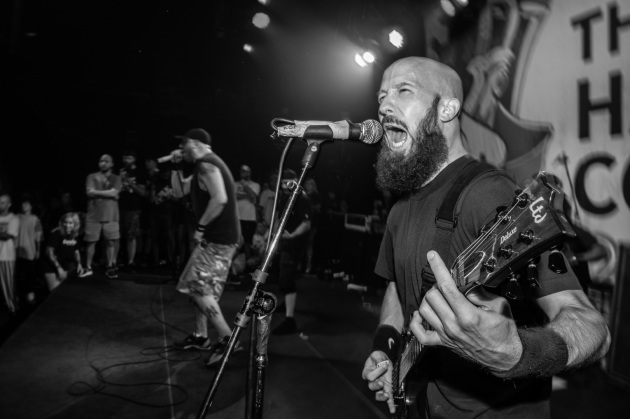 IE: So, speaking of lineup changes, I know one of the original Sworn Enemy drummers, Pauly “No Neck” (Antignani) passed away last year. I actually knew Pauly. He was like 16 years old and playing drums for EGH (Everybody Gets Hurt) and I met him at a party I had at my house after a show they played with NJ Bloodline. He was cool as hell and I kind of knew him ever since. Not like a lot, but I’d see him at shows sometimes and say what’s up. How does that affect you and Sworn Enemy as a band?

Sal: Well, it doesn’t have to necessarily be a band member. He was also a friend. I look at it as, you know, a terrible loss. Pauly was such a young guy. He left behind two kids. He left behind a girl and it weighs on me. You wish you could take things back and do things differently and maybe things would have been different. You kind of reflect on shit and it’s not easy to deal with. But, what can you do? People choose their path. I just wished that if somebody needed some help, maybe not have so much pride and reach out to somebody when they need it.

IE: Well, thanks for answering that question. Sorry if that was a bit heavy. So, my next question is how exactly did you get into hardcore music to begin with, like in the first place?

Sal: Well, when I first started getting into heavy music. I was like 11 or 12. My friend brought in a Judas Priest cassette to school and we were listening to it on the headphones and I was like “Yo, this shit’s pretty cool, man.” Then we had Iron Maiden and from there I started listening to heavier shit like Anthrax, Metallica, Slayer and stuff. I actually got into hardcore from Anthrax. I went to go see Anthrax play a show in the city (NYC) and Cro-Mags opened up for them.

SWORN ENEMY @ THIS IS HARDCORE FEST 2018. PHOTO BY: ANNE SPINA 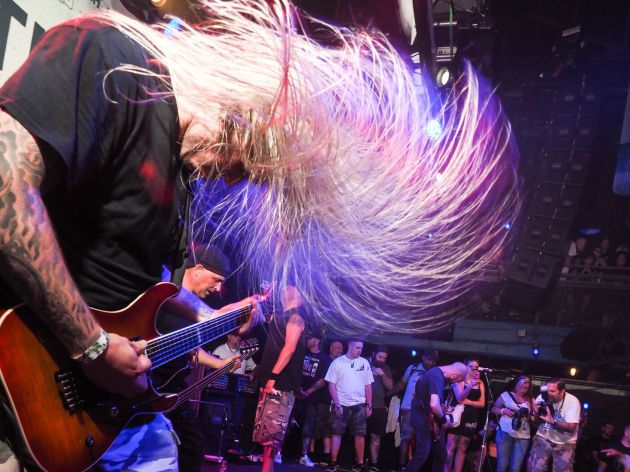 Sal: And that was it. I never seen anything like that. The energy on the stage was… I mean, you had Harley flying all over the place. You had John being a mad man. Mackie was killing those drums. It was just something to behold… especially, back then. This was in 1987…

IE: In New York. When New York was real too!

Sal: Right, and that was like the sickest shit to watch. The things the kids were doing when the Cro-Mags were playing, I never seen anything like that. I grew up listening to metal and thrash… now here I am at a show like this with tons of skinheads and shit and I’m like “This is fucking amazing!” And that was it. I bought “Age Of Quarrel”, I looked at the thank-you notes, I seen all the bands that they thank. I started buying all of those records, and that was it. I was hooked.

IE: Sweet! Yeah man, I started with the Misfits and shit. I lived in Lodi, NJ and I didn’t know it at the time when I was a kid… but I would see Jerry driving around in a fucking hearse. But I didn’t know. Then later on I heard it was him. I was just riding skateboards listening to the Misfits and then like Slayer came and I got into fucking death metal, but you come back. You know?

Sal: Of course! You know what? I look at it like this. Whatever genre of music it is, it’s all heavy shit and if it’s good, it’s good. It doesn’t make a difference what music it is. It could be hardcore, metal, thrash or whatever, but it’s all underground music. 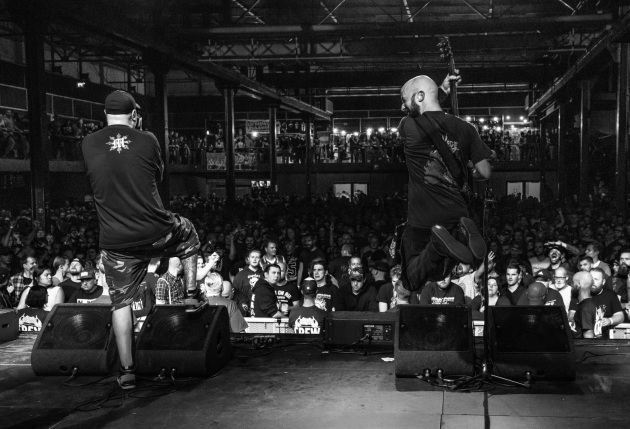 IE: OK, last question. Touring? Sworn Enemy doesn’t tour that much, but obviously the new album is coming out and you got some shows lined up. Where you going this time? Who’s coming with ya? What do you got?

Sal: We are going to do some headlining shows in April. We’re playing in Brooklyn, Virginia and Massachusetts for the record release. Our good friends in Mushmouth are coming to play a show with us in Brooklyn, which is really cool. For me, it kind of takes it back, ya know?

IE: Yeah. I saw them at The Wetlands years ago.

Sal: Our first East Coast Tour we ever did was with Mushmouth and Death Threat. So that’s pretty cool that they’re playing the record release in Brooklyn. Then in May, we got a nice little tour with Sacred Reich lined up, which is pretty damn cool because I remember seeing them back in the day. Always going to L’Amours to check them out. In August, we are going back to Europe. I’m actually talking to some people about Southeast Asia, Indonesia and all of that. Plus, I’m going to talk to my boy about getting us back to Australia. So, it’s probably going to be a busy year for us and I look forward to every moment of it.

IE: Sweet. Well, we’re looking forward to it! You know that you don’t get to see Sworn Enemy coming around much, so you might as well get it while you can get it! That’s what I’m thinking.

IE: Well, thanks for the interview. I really appreciate it.

Sal: Thank you so much for the great review of the record, dude. It was awesome. Thanks again for the interview. Take it easy, man! 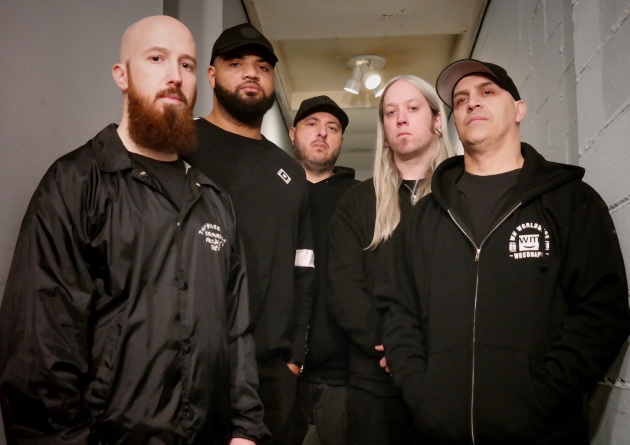