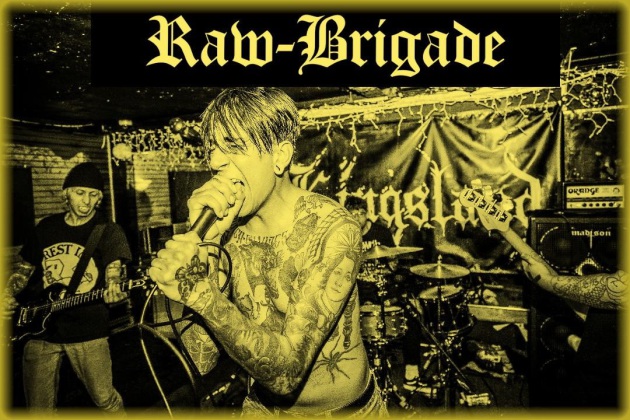 Bogota Colombia’s RAW BRIGADE made a nice impression on East Coast US hardcore fans last summer when they did a short run of shows surrounding their This Is Hardcore Fest (Philadelphia) spot. The impressions that they made have them back in the US as we speak for another short run of shows, this time surrounding the Damaged City Festival in Washington DC. Back in mid-February In Effect’s Josh Derr was at Pinstruck Tattoo in Newark, DE getting inked up when he texted me saying that Carlos from Raw Brigade was there and he was in the process of getting work done by him. After a few minutes of back and forth texting I came up with a list of questions and Josh asked Carlos the questions you are about to read. Raw Brigade are exactly as their name implies, raw, old-school style hardcore. It is mind boggling to think the reach and influence some of the old NYHC bands (in this case Straight Ahead) had on people across the world. NYC to Bogota by plane is 2486 miles and Straight Ahead put out their EP nearly 30 years before Raw Brigade even started as a band, but as you soon will read they are now connected. They have a bunch of music out on Bandcamp to check out, a new album out this summer on Six Feet Under Records and if you are lucky enough to catch them live, some of the sickest merch in the game today. Interview conducted on February 18th, 2019. 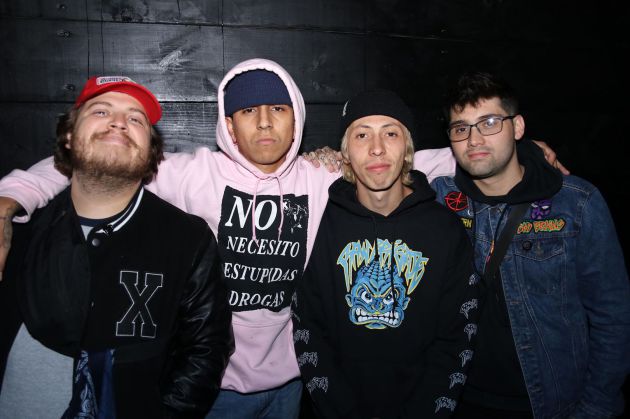 IE: For many of us here in the United States we didn't find out about Raw Brigade until last year’s trip the band made up here for the This Is Hardcore Fest in Philly and a few other shows in the Northeast. How far back does the Raw Brigade story go and how did 4 straight edge kids from Colombia find hardcore music and the straight edge lifestyle?

IE: What have you guys put out so far?

Carlos: We have that demo with the first 5 songs, we have a split with a friend’s band from Bogota. They are called Revival and they are also a straight edge band. That one has the songs “Do Not Approach” and “Broken Teeth”. Right now we have the “Kicking Your Face” EP with 6 songs and that is all.

IE: What is coming up next? How many songs? What label? When do you think it will be out?

Carlos: The new Raw Brigade record will be out this summer. I think it may have 11 songs and it will be an LP with Six Feet Under Records. 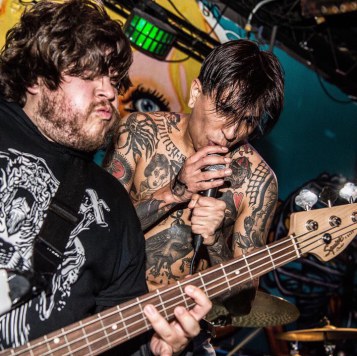 IE: How did you first make contact with US promoters and set up last year’s short run of shows? Who did you contact first or did they reach out to you?

Carlos: My friend Jeff from Odd Man Out, who are a straight edge hardcore band from Seattle also plays bass in Angel Du$t. Odd Man Out played in Colombia in 2017 and I figured everything out for Odd Man Out playing in Colombia. We did a 3 city tour in Colombia with Odd Man Out and Raw Brigade and at that moment we started the idea for a tour of the US. At first we had the idea to tour the West Coast because Odd Man Out is from the West Coast and then we ended up talking to Joe Hardcore from This Is Hardcore and he said it’s good and we said lets go. So the first contact we had with setting up our trip to the East Coast was with Jeff from Odd Man Out. He helped us with contacting the bands and a couple of shows.

IE: How many shows would you guess Raw Brigade has played overall since the band started?

Carlos: I am really not sure. When we first started we played every weekend. Maybe more than 50? In Colombia we have played with a lot of bands in our scene.

IE: What is the hardcore scene like in Colombia? Are there a lot of other bands doing what you guys are doing with an old school style and straight edge message or are you in the minority?

Carlos: The hardcore scene in Colombia right now is huge. We have a lot of good bands that are influenced by old school hardcore like Revival and Muro. Right now we have played with a really huge and important crew… the name is Rat Trap. Rat Trap is the guys from Muro. Muro has a sound that is super 80’s and super raw style. We have a lot of shows on the weekends with a lot of bands that are influenced by beatdown hardcore and old New York Hardcore. For straight edge we have Revival who started in 2014. Christian the bass player for Raw Brigade is in Revival and it was started with influences from the youth crew. The first EP from Revival is all youth crew covers but sung in Spanish. If you want to listen to it it is super sick. Inside Out, “Flame Still Burns” by Youth Of Today, “Bringing It Down” by Judge. In that moment a lot of people started to listen to 80’s hardcore. Muro is my favorite band in Colombia.

** You can listen to Revival's first EP with youth crew covers sung in Spanish HERE. ** 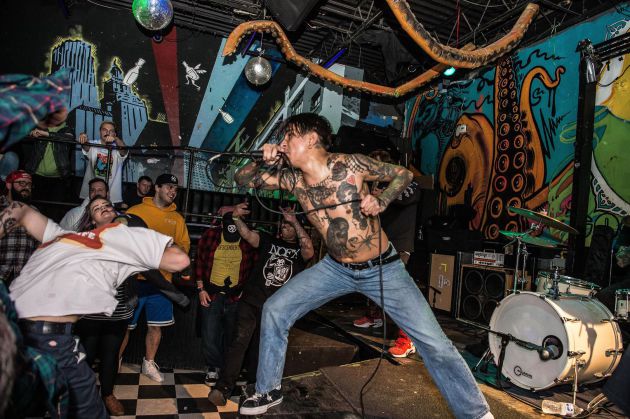 IE: From all accounts Raw Brigade went over really well last year on your East Coast US run and you guys seemed to be very well accepted. What were you expecting last year as far as people's interest in the band and were you happy with the responses you got?

Carlos: We are so excited about how Raw Brigade is accepted here. We love to play. That is everything about this band. I think it is the most important thing to us with the band. We play every show like it could be the last one for us. It doesn’t matter if we are on stage in front of a lot of people or just our friends or straight edge kids or drunks, skinheads or metal heads. It’s always like it is our last show. This is how we always are. When we came here to play we came with the same attitude. When we play in Colombia we play the same as we did at This is Hardcore with the same emotion… like a lets destroy everything type of attitude. When we started playing here and saw that people were talking about our band we thought it was insane. We never thought we would get the reaction we got. Right now I think this is a really good time for us to have our new record coming out. We like “Kicking Your Face” because it is a fierce record and it is important to us but this new record we are going to try and do our best with Six Feet Under. 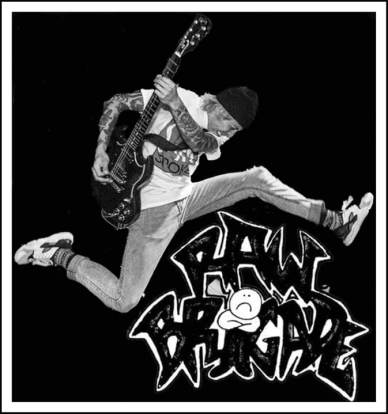 IE: You are obviously here now doing tattoos. I think you visited NY a few months ago as well. Do you travel a lot to do tattoos? Is this your profession?

Carlos: In our band just Camillo is not a tattoo artist. Christian, Juan and myself are all tattoo artists. It’s our work. We love tattoos. When we go out on tour I do a lot of friends and like to take advantage of being able to do some work when I can.

IE: What can you tell us about the bands return this spring to play again in the US? What are the dates? Where are you playing?

Carlos: We are coming back with Raw Brigade to play Damaged City Fest in DC. It is a huge festival and we are stoked for that. We have to make a short tour around that to see all of our friends. We have made a lot of friends on this coast. We want to repeat what we did last year. We are going to play in Connecticut, Boston, New York, a show in Perth Amboy in New Jersey. Shout out to the crew in New Jersey who are like our family. We are also playing in Richmond with Torso. So yeah… Damaged City and also Philly. We will try to figure out a couple more dates but when you are trying to figure out future dates and you are not speaking in your own language it is hard to remember it all! (Laughing) 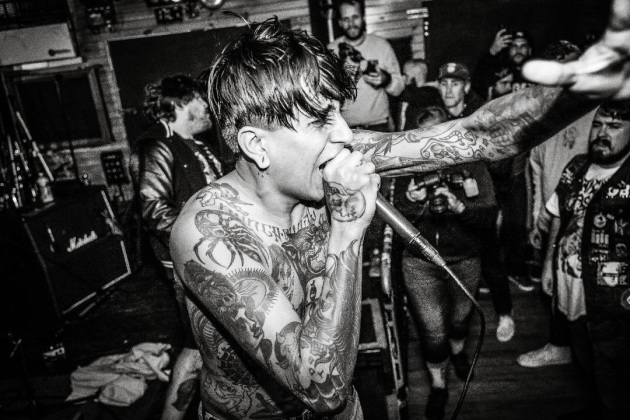 IE: Are there plans for more touring outside of Colombia? Where would you like to go?

IE: That seems a little weird that you would say that about the money because you are already there.

Carlos: Yeah but the hardcore scene in South America is all about passion. It is not like you are going to get paid for your set. We would have to pay for everything and I mean everything. So yeah, we are not rich (Laughing). We are going to go to Europe too. Maybe not this year, we are not sure right now. 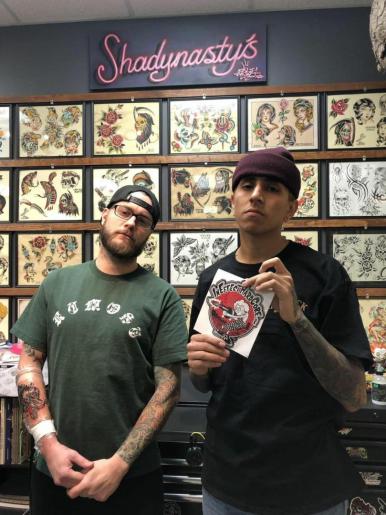 IE: Why the name Raw Brigade?

Carlos: We like a lot of skating stuff so like Bones Brigade is a really good name for a crew or a gang or whatever and we wanted to find something with brigade in it. Also “Right Brigade” by the Bad Brains is the first song we ever covered. We were just looking for a good name for the band and our lyrics are raw and straight in your face, they are raw, they are certain and that is how it is. Some bands like talking about something and I read their lyrics and I don’t understand that bullshit. I will talk about their lyrics with the other guys in the band and we can’t figure out what they are about. When you see our lyrics you know what we are talking about. They are raw and how it is.

IE: Thanks a lot for your time. Do you have anything else you wanted to add before we wrap this up?

Carlos: I don’t know. Go see Raw Brigade this spring. For us coming to the US and playing shows is super. Hardcore is about love. We play with love. We love hardcore. Shout out to all the people on the East Coast.    Photo: Josh In Effect with Carlos Raw Brigade @ Pinstruck Tattoo in Newark, DE on February 18th, 2019. 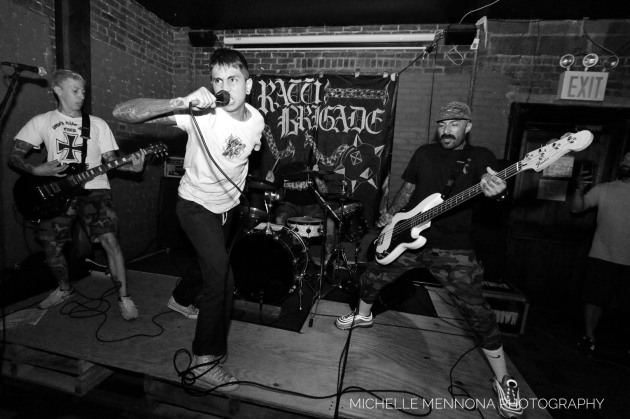 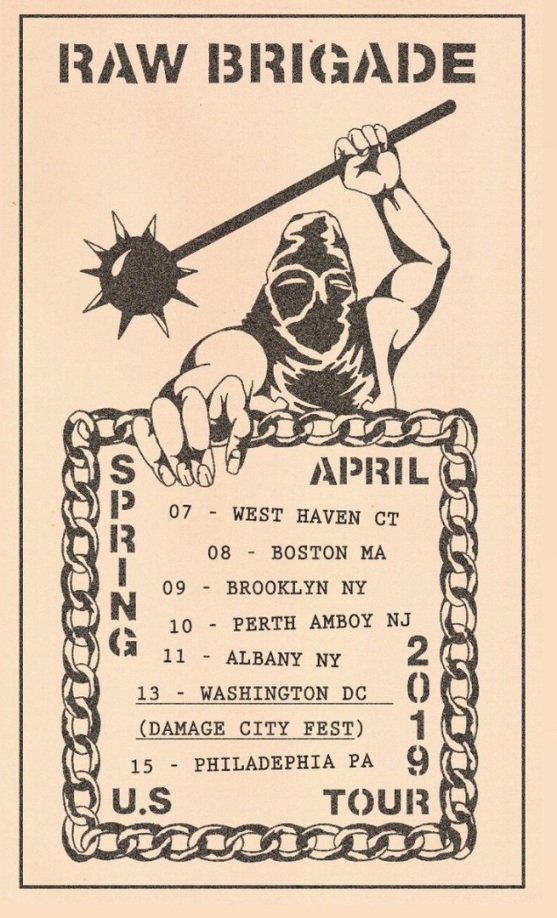