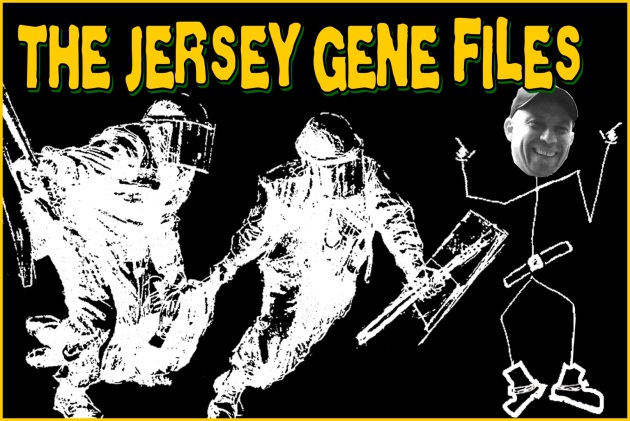 What’s up! I’m Gene, or as some of my friends call me Jersey Gene. I’m currently 46 years old and started going to hardcore shows in the late 80’s, I still try to attend shows whenever life allows me to and within the last year alone I saw bands that I grew up with such as Burn, Agnostic Front, Judge, Supertouch, Killing Time, Outburst, Murphy’s Law, Sick Of It All, Vision, Maximum Penalty, Antidote, Rest In Pieces (!) and Token Entry. Needless to say, after all these years I’m still pretty psyched to be able to see bands that shaped my formative years and had a huge influence on me being who I am today. I had found these show reviews I did as a 15-16 year old ESL (English as a Second Language) kid who wanted to do a zine but never did, and asked In Effect if they could use them... so here they are, I hope you enjoy them and take them for what they are, written through the eyes of a kid in the late 80’s.

McRad was a crossover skate band from CT I think, they were pretty boring. Underdog were great & blew AF away. Underdog played "True Blue", "Say It In My Face", "Back To Back", "Stop, Look & Listen", "Underdog" (first time being played live) & "Front Side Grind". Agnostic Front started off with "Victim In Pain" & played songs off all their albums, they were good but I liked Underdog better. 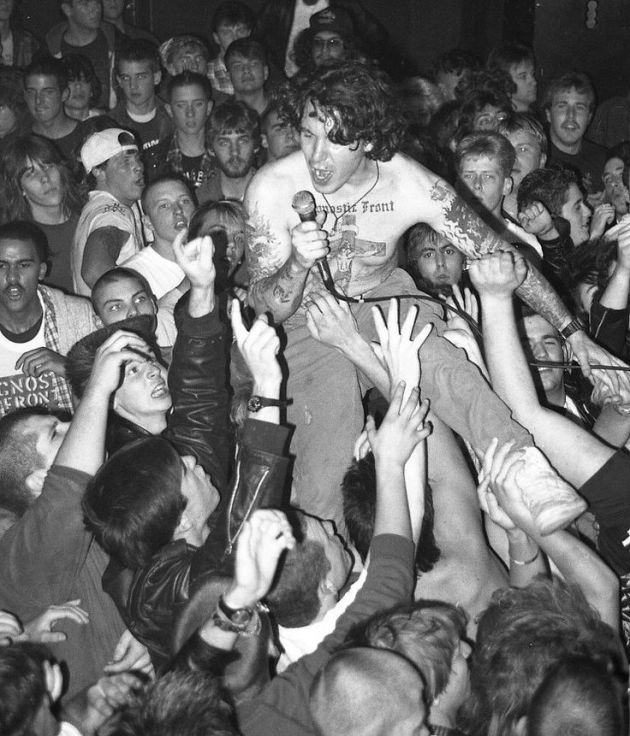 L'Amours sucks. No stagediving, the bouncers are dicks. I missed Damage & most of Leeway, what I saw of them was good. Cro-Mags were incredible. JJ went off, Harley didn't stop moving the whole show. They did everything off "The Age Of Quarrel" plus a few new songs such as "Crush The Demoniac" which they dedicated to Venom (who suck now anyways). Another new song was "The Age Of Contamination" (??) on which Harley sang. Maybe it's just me but the new songs sound a little metal. 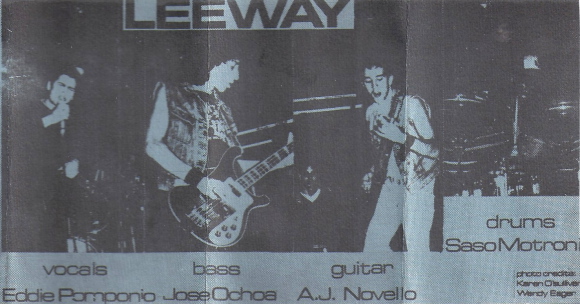 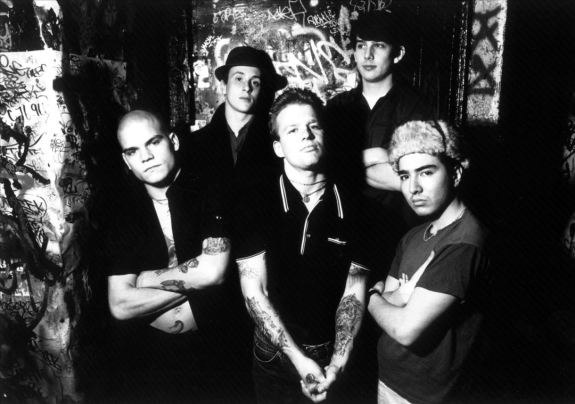 CRO-MAGS- Before The Quarrel

I missed SFA but heard they weren't good. Doggy Style sucked.  Damage were good but they usually are. They did a new song called "Swallow The Yellow Thick Load". D.I. did only 2 songs off their "Team Goon" album & they were "Richard Hung Himself" during which the singer was strangling himself with the chord & "Right To Bear Arms". The guitarist from Doggy Style was playing bass for D.I. Casey Royer had a shaved head for this show. CA Skate Punk in NYC in December? Nah, This show was not worth freezing for. 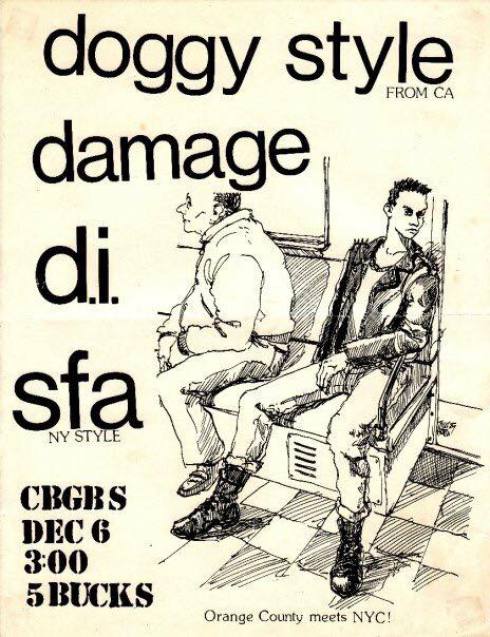 I missed Bedlam Hour (why do I  miss so many bands?) Krakdown raged & "The Skate Song" was well liked. Rest In Pieces were also great but I don't own the "My Rage" record yet… all I got is the 7" but I heard "My Rage" a bunch of times so I knew some songs. Token Entry were next and they were missing a guitarist but were still great. They played "Antidote", "Decide", "Latent Images", "The Edge", "Psycho", "Forbidden Zone", "Windows", and a new song I think it was called "Skate, Skate, Skate", another new song called "Token Entry" & "Born To Be Wild" by Steppenwolf. Tim was going nuts with his newly shaved head. CB's said "no stagediving" but who listens? Amazing & insane show. 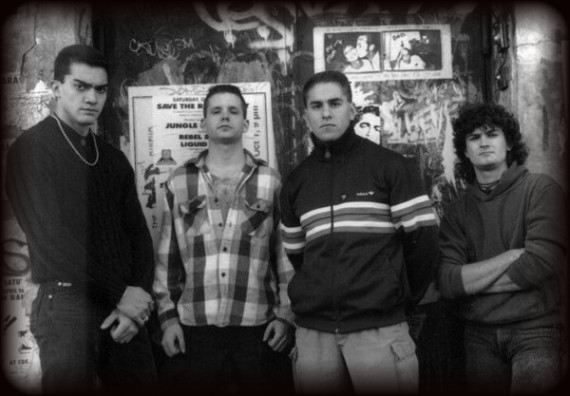 REST IN PIECES "My Rage" lineup

I missed Outburst & Breakdown cancelled, I'm not into anyone else so I didn't go in.

ABSOLUTION, KRAKDOWN, RAW DEAL, SICK OF IT ALL @ CB’s

I wasn't really into Absolution or Krakdown for some reason, maybe because I wasn't familiar with their stuff. Raw Deal were great, it was the old singer from Token Entry & mostly guys from Breakdown. They did all the songs off their demo which is great by the way. SOIA went off, started things with "Clobberin' Time" and did a lot of songs. Oh yeah the 2 huge skinhead bouncers that worked the stage quit during their set. They told us as we saw them walking down Bleeker away from the place, and at one point there was at least 15 people on the stage besides the band. 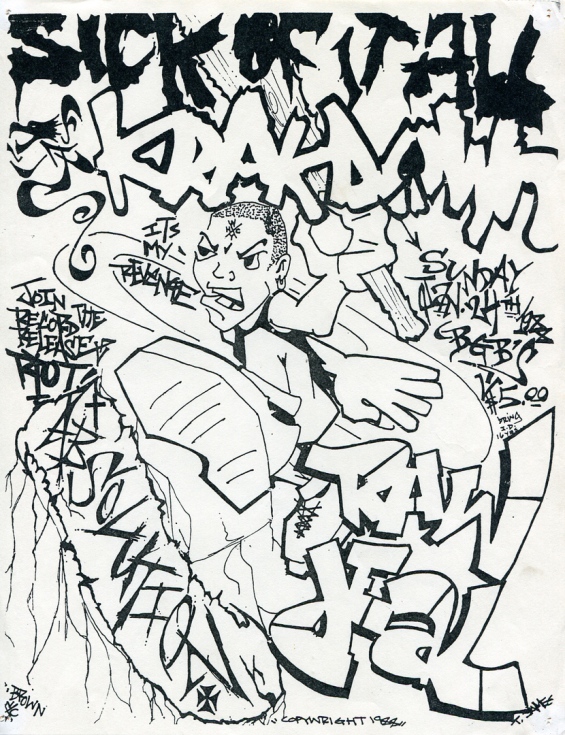 Outburst were pretty good, YDL were ok, I was disappointed with the new singer, he's got an Oi! voice & the new stuff sounds Oi! Rest In Pieces were great, played a bunch of new songs. Warzone were also very good but it was too violent during them… fights every 5 seconds. The ambulance came 2 times. There was also a riot outside after their set & Raybeez almost beat-up some skinhead kid with a small Louisville Slugger. 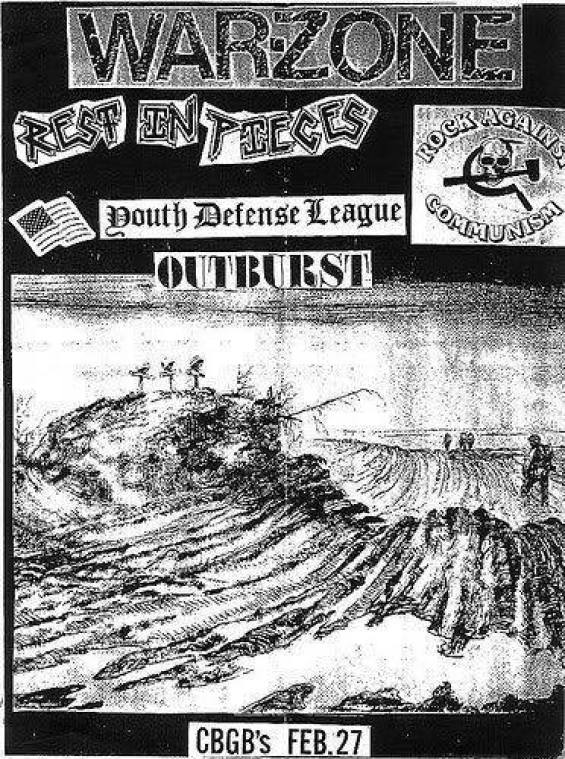 I missed Honor Role. Damage were great, they played “Circle Mommy” which was a great song. C.O.C. were also good even though I hate the new one. They did songs off all 3 of their albums & played for a really long time. Non-stop stagediving the whole time. 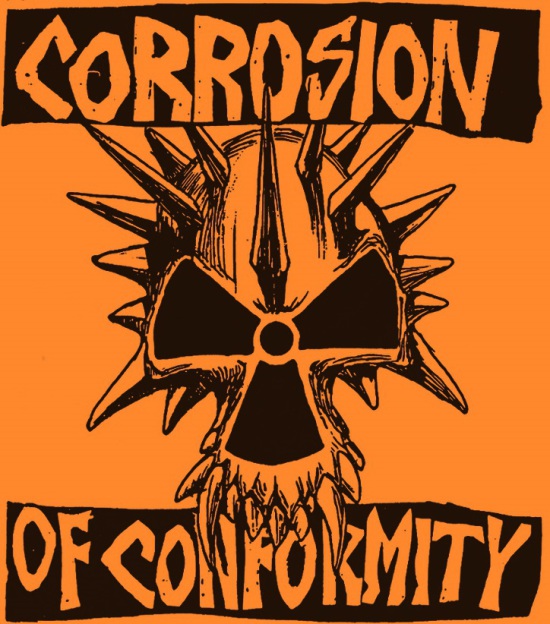 I missed most of the first 3 bands, walked in at the end of Warzone. A lot of fights going on. D.R.I. did mostly their metal shit off the newest one & some old songs. The Exploited sucked. Watty was funny trying to dodge the spit, drinks & ice cubes being thrown at him. This show was a waste of money $16.75 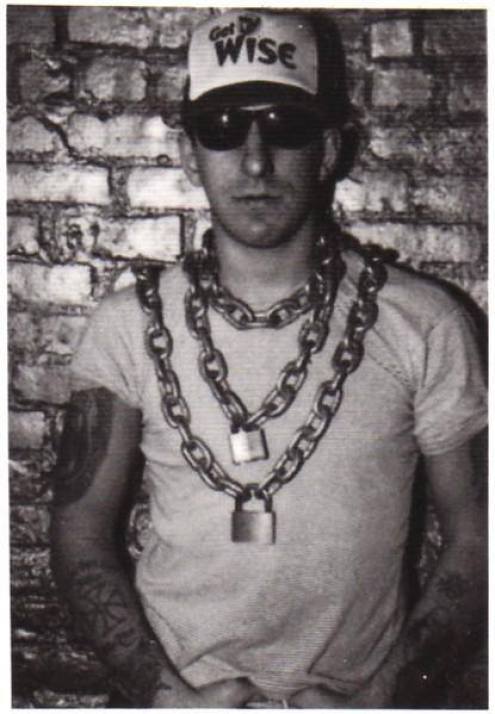 This show was pretty beat. Stillborn played 2 sets because Ludichrist cancelled. Sheer Terror had technical problems and that turned into a big fight between the band, the skins, the soundman & the bikers who ran the place. Their set was stopped short. Sarcasm were pretty good and the NY Hoods went off. Intense Mutilation was also supposed to play but didn't, 2 metal bands played instead but they sucked. After the show the guitarist from the NY Hoods was so messed up he asked us what borough he was in. 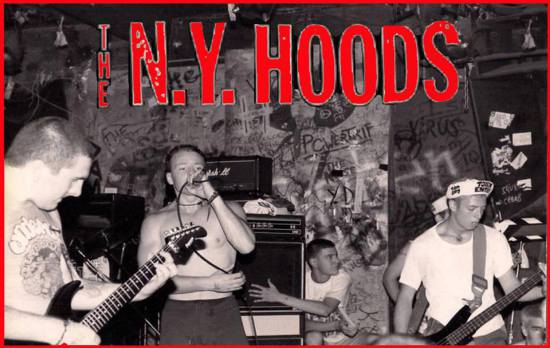 Holy shit, what a great show, I missed Project X but I think they suck anyway. Missed most of Raw Deal but saw them do "Wall Of Hate" & "My Reason". Krakdown & Supertouch were both ok. Underdog were great again, played "Back to Back", "Stop, Look & Listen", "Underdog", "Say It In My Face", "True Blue" & a new reggae song… I think it was called "Mass Movement". SOIA were also great, started with "Pete's Sake". Warzone started off with a smoke screen and the first song was "Fighting For Your Country". They did around 15 songs including a new one called "American Skinheads". This was hardcore history in the making. Next week Feb 28th is Rest Pieces, YDL, Warzone at CB's, should be a jumpin' show. 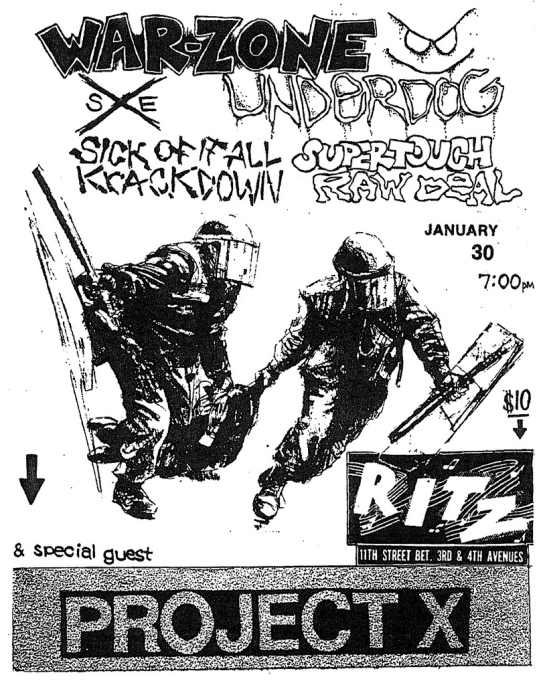 STILLBORN, SICK OF IT ALL, LEEWAY, LUDICHRIST @ CB’s

Stillborn were good, SOIA were unbelievably great! Doing songs like “Bullshit Justice”, “Pete’s Sake”, “Just Lies”, “My Revenge”, “The GI Joe Headstomp”. They had the whole place dancing. Leeway were really good too. Did all the songs off the “Enforcer” demo & some others.  Ludichrist were last & I was psyched to see them. They started off with “G-d In Everywhere” & played all the songs off their record except “Murder Bloody Murder”. During “You Can’t Have Fun”, the whole crowd went up to help Tommy sing. 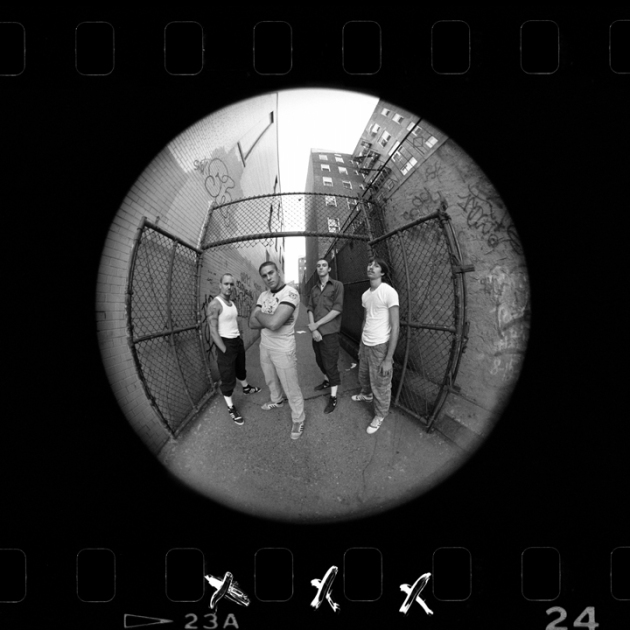 Token Entry were awesome, doing almost their whole record. Lethal Aggression was a “dust-core” band from NJ. They did mostly songs off their “From The Cunt Of The Fuckin’ Whore” demo like “Cuntry Pig”, “Spooge” & Vodda Vodka” & some new ones I didn’t know. Ludichrist played the same exact set as the CB’s show, only on “You Can’t Have Fun” Danny Lilker & John Connely from Nuclear Assault came up & sang it. 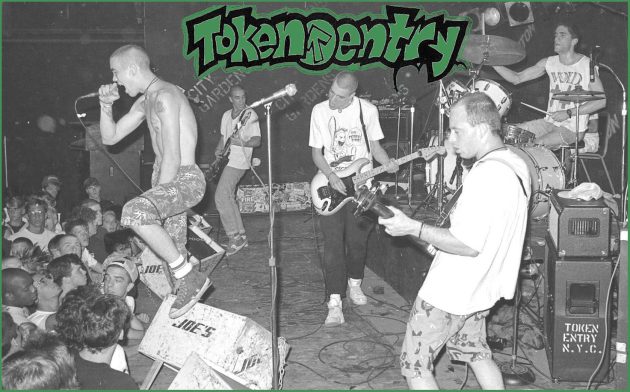