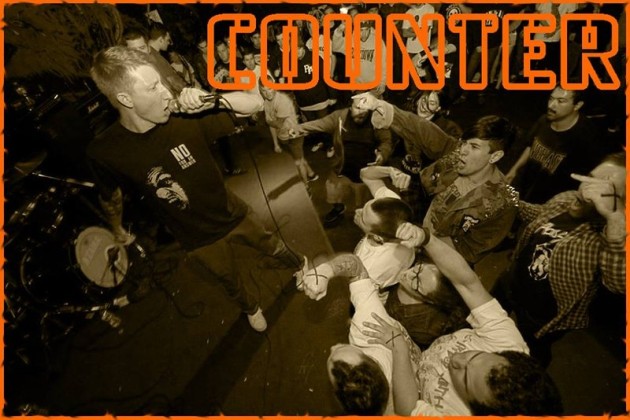 Counter from San Francisco is: Alex (31) guitar, Taylor (23) drums, Matt aka Skones (33) vocals, Phil (28) guitar, and Ben (26) bass. Counter got their start in early 2012 when Alex and Taylor decided to write a bunch of straight-up straight edge hardcore songs in the style of bands like Youth Of Today, Floorpunch, Side By Side, Chain Of Strength, and No For An Answer. Finalizing the lineup was as easy as reaching out to a few longtime friends who shared the same goals. To date the band has played 6 shows with the first one being with Blacklisted and Living Eyes. This past spring they played a 3 day weekend of shows with Mindset in California. So far they have released a 6 song demo which was only released on a small amount of cassettes that the band made. You can hear songs from this demo on their Bandcamp page listed at the end. Next up are plans for a 7” which they hope to have out in early 2014. The current members of Counter are in or have been in other bands including: Skin Like Iron, Lies, The New Flesh, Coma, Set It Straight, Some Still Believe, Secret People, Right On, Stressors, Crucified, Shambles, and Plead The Fifth. 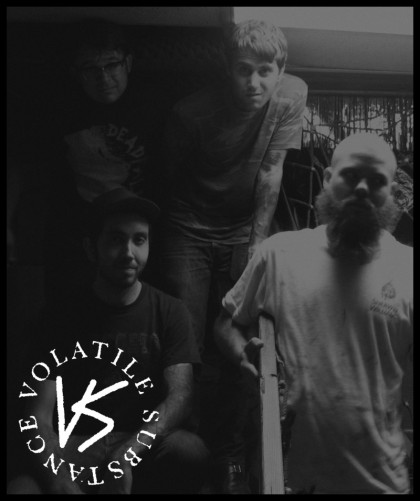 When it comes to FRESH BLOOD it doesn’t get any fresher than Oakland California’s Volatile Substance who became a band a little over a month ago in early June. The band consists of Demecus on drums, Jorge on vocals, Brian on bass and Joey on guitar. Less than 2 weeks after forming the band they recorded a 4 song demo titled “Soak My Body In Gasoline. Bathe Myself In Fire” on June 15th and 16th and had it released online (for free) a day later. The band members have been involved in other bands including Wake The Machines, Crypt Keeper, Lunge, Pancake Lizard, Dr Kill ‘Em All, and Chubby Chubbies. Guitarist Joey runs a small label called Vandals And Thieves which he started in 2006 and Jorge runs a small label/distro called Hashcrimes LLC. The “Soak My Body…” demo will be available as a very limited cassette release (16 copies) when they play their first show on July 15th in Oakland with Ordstro, ACxDC, Deadpressure, and more at the Monday Night Creep Show. Their second show will be also in Oakland on August 10th followed by a September 7th show in San Diego where they plan on having a second 4 song demo/EP available. Volatile Substance is looking for more shows including tours so get in touch if you are interested in booking them. 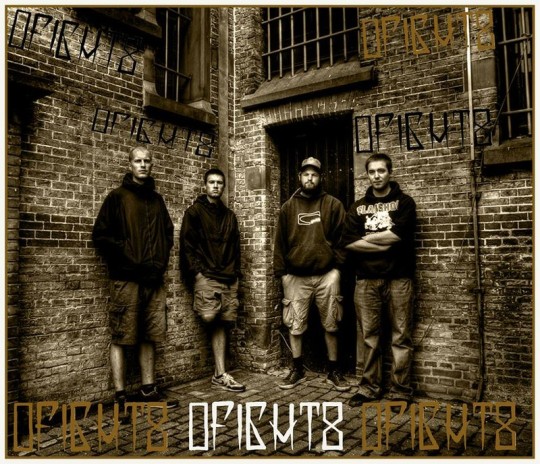 OFight8 are from Leeuwarden, The Netherlands and started midway through 2009. The band consists of Frenk Schnuck: vocals, Jurre Bouhuijs:drums, Peter Niemeyer: guitar, and Erik Van Houte: bass. In April of 2011 they released their debut demo titled “Cut The Crap” which contains 6 songs. In June of this year they released the “No More Compassion” EP which contains 6 songs and was released through War Inside Records and Crashlanding Records. The band made videos for the songs “Stuck” and “The Wrong And The Wrong” off of this new EP. You can listen to 3 of the 6 tracks off of the “No More Compassion” EP on their Bandcamp page. To date the band has played approximately 100 shows mostly in the Netherlands with such acts as Negative Approach, Slapshot, No Turning Back, Cornered, and New Morality. One of their recent sets was a Slapshot tribute as well. Their drummer Jurre also plays drums for fellow Leeuwardeners Pantah. Erik their bass player built both the bass and the guitar the band uses. 0Fight8 members are also involved with the “Uit Je Plaat” fest which comes around every few months in their area.

Video for "The Wrong And The Wrong" 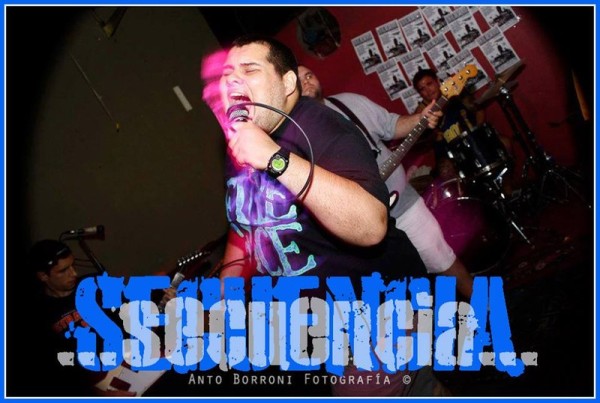 Secuencia which translates to Sequence in English is a 5 piece band from Buenos Aires, Argentina. The band got its start in November of 2012 and have a 2 song demo which you can listen to now on their Bandcamp page and soon will be able to own when cassette versions are available on Caverna Discos run by the bands singer. Overall the band now has 10 songs which are all in Spanish and should all be recorded by the end of 2013 for a full length album. To date the band has only played 2 shows and a 3rd one that was scheduled with Cruel Hand from the US was cancelled due to immigration issues in Argentina. Guitar player Kiko runs Varsity Records which started in 2003 which also operates as a booking agency as well having brought such acts as Bane, Have Heart, Shipwreck AD, and No Turning Back and more to South America. 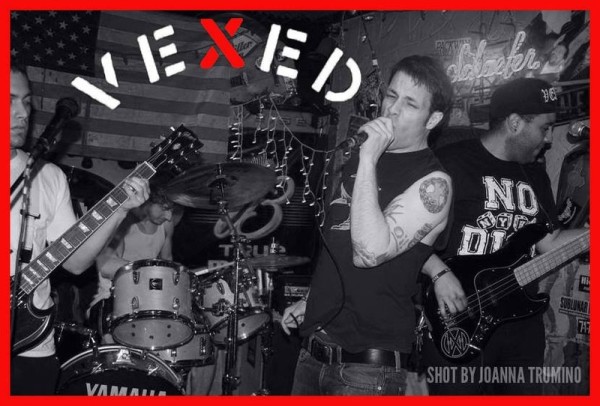 Vexed is a 4 piece band from Queens, NY that formed in May of 2012. The band consists of Joe on vocals (who also plays guitar in No Dice), Gil on guitar, Tom on bass, and Eric on drums. They just released a 6 song demo on June 13th which is available for free download via their Bandcamp page as well as free physical copies at their shows. The band has played approximately 15 shows in their first year and have a few new tracks that they are working on for a possible split with No Dice and Dead Ringers. Vexed has the social media angle covered with Facebook, Twitter and Instagram accounts: (@Vexed718).

DEFY THE CROWN (THE NETHERLANDS) 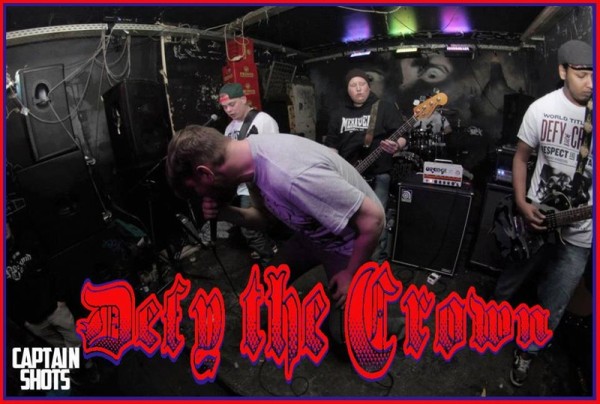 Straight out of Waalwijk, The Netherlands is Defy The Crown, a 5 piece who have been at it since the winter of 2009. After some band restructuring they released their debut EP titled “Hatred From Inside” in 2012 on Clenched Fist Records. They have just finished work on their second EP for Clenched Fist which will be 6 songs. You can hear the new tracks “My Time” and “Taking It Back” on the bands Facebook page as well as two older tracks. Throughout their brief history the band has found it difficult to go out on full length tours but have managed to play over 100 plus shows in their homeland as well as neighboring countries Germany and Belgium with such acts as Backtrack, First Blood, No Turning Back, Backfire! and more. They have a rarely used Twitter account as well. @DefyTheCrownHC

ON THE LOOSE (NY) 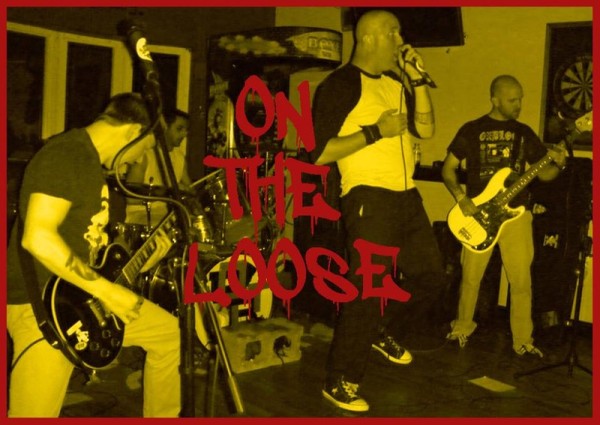 On The Loose are a 4 piece band from the Westchester area of NY… just outside of NYC. The band came about in April of 2013 when Scoot Horton left their previous band called Shell Shock. The last 3 members of Shell Shock (Andy-vocals, Tim-bass, and Mike-drums) had a meeting and decided to keep the songs they had been working on that Scoot didn’t write, start playing shows again as soon as possible, and change the name of the band to On The Loose. Shortly after they found Justin to become the bands guitar player. On The Loose played their first official show on May 31st in Whitestone Queens with Caught In A Trap, Seizure Crypt, and Yo! Scunt. They have 3 songs available as a preview for an upcoming 8 song DIY 7”. The recording for this 7” was recently completed during two sessions and the band hopes to have this 7” available by the late summer/early fall. 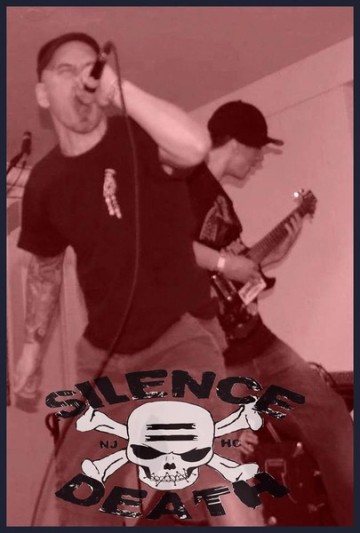 NJ’s Silence Equals Death are a 5 piece from NJ who formed back in 2011 and have gone through many band member changes since their start. SED currently consists of founding member and vocalist, Scott Earth (In Search Of, Flat Earth Society), Jason "J-Blunt" (Arms Of The Few, Blunt Truth) on guitar, Greg Jaeger (from Chicago's Roberta Sparrow) on guitar, Matt Busgang (Long Night) on drums, and newest edition Geo- (bassist of Step2Far). The band released a 4 song EP titled “Resurrection” in September of 2011 prior to the lineup changes that were to follow. With a more steady lineup now in place they have played approximately 15 shows in the NY/NJ area over the last year. They have a few NY/NJ shows lined up for July and August in addition to a July 9th show at The Meatlocker in Montclair, NJ where they will be filming live footage for use in a video for the new song “Survival Of The Fittest” to be produced by their singer Scott. Look for the debut of this video to be aired here on In Effect when it is completed. SED have begun recording for their follow up to the 2011 “Resurrection” EP as well. Although maybe a new name to some reading this the band’s members have been around the hardcore and punk scene for years having done tours with previous bands as well as doing their share of recordings. Singer Scott started Scorpion Records in 1999 to help out his band at the time (Flat Earth Society) and other bands as well with more recent releases including Ripface Invasion, Know Your Enemy and Turn It Up. Make sure to check out the 2011 “Resurrection” EP which is available for free download via their Bandcamp page along with some cool cover songs as well. Hopefully their lineup problems are now behind them as their debut EP showed tons of potential. 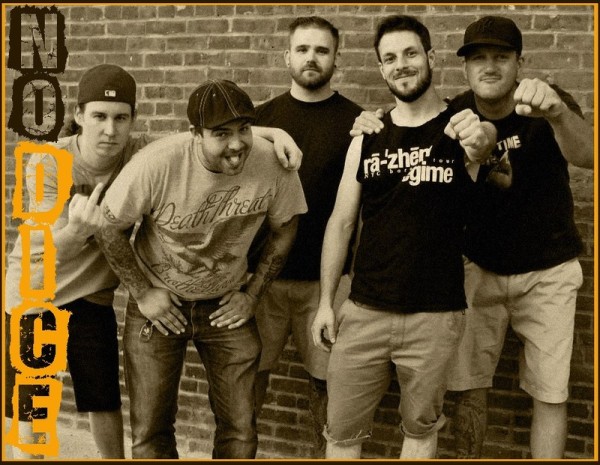 No Dice are a 5 piece from Queens, NY who got their start in 2012 playing their first show on June 1st of that year in Brooklyn with Murphy’s Law and The Last Stand. Their 3 song demo “Mother Fuckin’ Party Time” was released in January of 2013 and is available for free at No Dice shows and can be heard on their Facebook and Reverb Nation pages. The band has played a total of 17 shows to date sharing stages with the likes of Death Threat, Suburban Scum, Vision Of Disorder, Ensign, Stigma, No Redeeming Social Value, Two Man Advantage and more. Their most notable show so far was on a boat that sailed around NYC with Murphy’s Law on Jimmy G’s birthday bash. The band currently has a set consisting of 10 songs, all of which are slated to appear on a DIY full length the band is planning with recording starting this summer. Look for them to start playing shows in the Northeast as well other East Coast dates throughout the summer including August 17th with Sheer Terror in Albany. Drummer Danny plays guitar in the Queens based Endwell and guitarist Joe sings for Vexed. You can also catch No Dice on weekends in various city parks around Queens as the entire band plays on a bar league softball team called “The Dirty Dozen”.