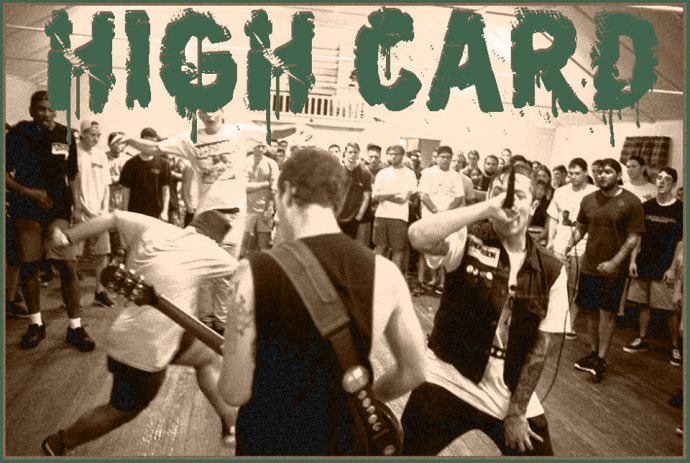 Long Island’s High Card got their start in October of 2012 when Quinn (vocals) and Eddie (guitar) met while attending Stony Brook University where they discussed starting a band that sounded like early ‘80s style hardcore. Andy on bass and Matt on drums rounds out the High Card lineup who are all in their early 20’s. By June of 2013 they had released a 5 song demo recorded in their drummer’s basement. Their very first show was opening up for The Rival Mob and Criminal Instinct at the Sayville Republican Club on Long Island and their second show was also in Sayville this time opening for Incendiary. Look for them to open for Bane on November 30th in Amityville, NY. Matt sings in Miss My Chance as well as sings and plays guitar for Depressant. Andy plays in Pilgrims Of The Fingertips and Eddie used to play in the NJ power-violence band Witness. Their 5 song demo from earlier this year was one of the best demos I have gotten while doing this site and I really hope this band moves forward with writing and playing out because they really have the right idea when it comes to making good music. 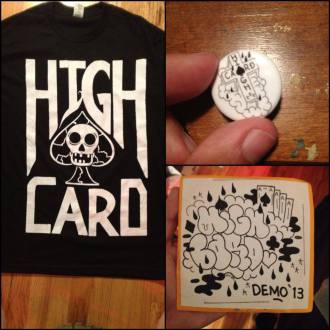 IE: When you look around at many of the other hardcore bands that are coming out of Long Island these days you don’t see many playing a more old-school style that you guys have embraced. When you guys were kicking around the idea to start High Card what kinds of ideas were you talking about in regards to the direction you wanted the band to take?

Quinn: We always wanted to do something that was more on the punker side of hardcore. I loved all of those early 80s bands growing up so doing something along those lines was a no brainier for me. When I approached Eddie about the idea he was really into it, he said he wanted to sound like Negative Approach, SSD, and Antidote so that was perfect. I don't think I'd say that's EXACTLY how we sound now but that was the original idea. Like I said, that was the style that first got us into hardcore and I feel like there's a lack of bands that do that style right now so we just wanted to do something in that vein.

IE: It seems like the band and then the demo came together pretty fast. Can you give us a time frame as to when the band actually started to when the demos recording was completed and how often and where does the band practice?

Quinn: We started practicing in October 2012. We were all pretty busy with school and other real life stuff so the writing process actually ended up taking a while. We had the 5 songs we were happy with which are the ones that ended up on the demo by around April/May and then the actual demo was recorded and put out by the beginning of June. We don't get to practice too often because our guitar player has a full time job now and lives in New Jersey, but when we do practice we either do it in our drummer, Matt's basement or at a random practice space.

IE: How has the response to the demo been? Do you know how many people have downloaded it and how many have you sold or given away on your own?

Quinn: It seems like kids are into it which is awesome. It's hard to get your name out there if you haven't played a lot or even out of your own city at all so it's just cool to me that kids from out of Long Island know and like us at all. I can't really tell you how many demos I've given out but I try to bring some to every show I go to now, especially ones outside of Long Island. So if you see me at a show make me give you a demo!

IE: Realistically speaking where do you see High Card a year from now or where would you like to see the band as far as recordings, playing shows and just overall progress?

Quinn: Ideally I would like to have a few new songs under our belts, not even necessarily recorded but it would be nice to expand the set list a little. Also, we'll hopefully have done a few weekends by then. My main goal for the next year is to play all of the main areas in the vicinity of Long Island, but I'll be happy if we just play half of them.