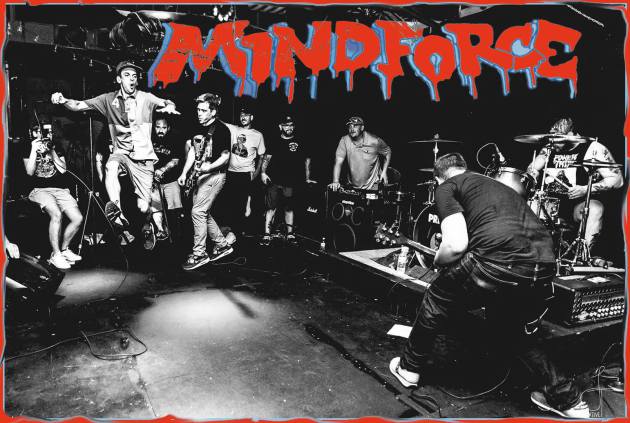 MINDFORCE from the Hudson Valley area of New York grew out of the band Living Laser who were around from 2010-2016. In July of 2016 Mindforce released a 4 song demo and in April of 2017 a 5 song follow up titled “The Future Of” which is now available on 7” vinyl from Trip Machine Labs. Their first show was in Wallingford, CT on August 23rd of last year and to date they have played 20 shows in all. Mindforce consists of: Jay-vocals, Mike-guitar, Nick-bass and Donny-drums. Click HERE to get more info about buying "The Future Of" on 7" vinyl through Trip Machine Labs and click HERE to get more info about buying their 2016 demo on vinyl through Coin Toss Records.

A FEW WORDS WITH MIKE AND JAY OF MINDFORCE:

IE: What’s up guys? Mindforce comes to us with 3 quarters of your previous band Living Laser intact and I think you just have a different bass player now. Since you guys announced Living Laser’s breakup last May you have already put out a 4 song demo and now a 5 song EP called “The Future Of”. From what I have read and heard is that you guys wanted to go more in a crossover direction with the band and go for a heavier sound. Can you fill us in more on these last 14 months as there seems to be a lot to say on how you got here.

Mike: Mindforce is three members of Living Laser with our good friend Nick on bass. Nick was filling in for our bassist at the end of Living Laser. Once we started writing music with him it became apparent that all of us were more interested in playing thrashier songs. It felt like the right time to move on from Living Laser. Those first two batches of Mindforce songs came together quickly and were a lot of fun to write. Glacial Records released the demo tape which was followed up by a repress on Streets of Hate and a Euro press on Straight and Alert Records. Now with the two 7 inches out were trying to play out as much as possible and get out to some new areas.

IE: I absolutely love the new EP. I feel like I had a good band already in Living Laser and now I have this amazing band in Mindforce. Were you guys sitting around one day and thinking “we have to play more stuff like Leeway, Icemen, and the Cro-Mags”. Was everyone in the band 100% on board with basically taking a few years of combined hard work and just putting it all on the shelf to create this new band?

Jay: Towards the end of Living Laser we all wanted to incorporate more crossover and thrash into our sound which is very different than the sound LL started as. Leeway, Icemen, and Cro-Mags are some of our biggest influences but we also wanted to incorporate more of the thrash we grew up on with influences like Metallica, Vio-Lence, Excel, and Death Angel. We've all been in and out of bands with each other since the late 90’s so everybody was on board with starting Mindforce. 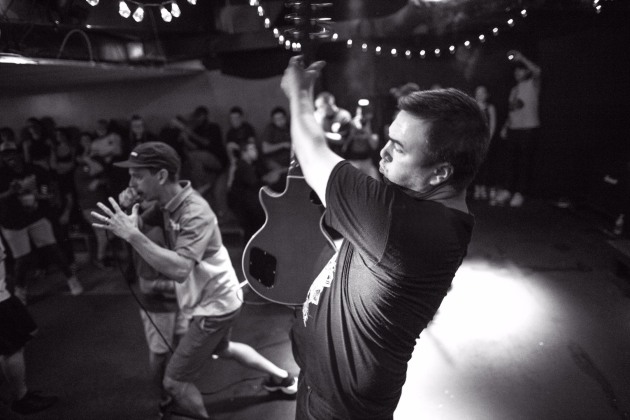 IE: With your previous band and even more so now with Mindforce I would have to say that you guys are currently one of the best group of musicians in this hardcore/crossover genre. The guitar solos on the latest EP really stand out and add another dimension to your sound. Do you feel like you guys have somehow upped your game with this band as compared to Living Laser or is this more of a product of a lot of fresh and new ideas just coming together with a lot of passion?

Jay: Wow! Thanks man! I don't know… There's some great crossover coming out right now from all over the world.  We all enjoy playing multiple instruments and many different styles of music. Mike "Chain-Shaw" Shaw doesn't play around when it comes to solos man. I watch this dude on stage while he's playing next to me in awe most nights. The dude is a savage! To be honest with you though, it's not us trying to "up our game" it's just great friends having fun in a room together.

IE: Where have you guys been playing shows and outside of your home area in the Hudson Valley what other areas have been showing Mindforce some love and backing the band?

Jay: We are trying to play everywhere as much as we can. Some of our favorite scenes to play and hang are Long Island, Connecticut, NYC, Massachusetts, Richmond, VA and of course the Hudson Valley, NY. 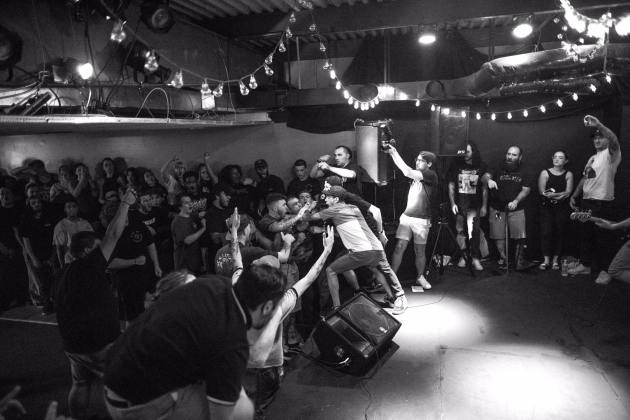 IE: What has been the best show so far as far as crowd participation and people knowing your songs. Who else played? Where was it and when?

Mike: I think our record release show we just played was one of my favorites as far as crowd participation. It was in Beacon, NY with our friends in Hangman, Vein and Slavestate. Also getting to be on the United Blood preshow in Richmond, Virginia was really fun. Playing that far from home and seeing people react and sing along was a great feeling.

IE: What kind of feedback are you getting from fans either on social media or after you play live? Specifically people who were also fans of Living Laser. Are they liking Mindforce more across the board or are some wishing you kept things more the way they were with Living Laser?

Jay: Some people like it better, some people don't. We are just having fun and doing what we do.

IE: “Storm About To Burst” is one of the songs off the latest EP. Great title. This song and a few others have lyrics that almost have to be dissected to get a feel for the real message behind them. What are some of the songs that everyone in the band gets behind the most lyrically and what are those particular songs about?

Jay: Thanks! I deal with a lot of social/political themes in Mindforce. I don't like to get too specific with how they were born out of my personal life, but I think the message of each song comes across when you read them. “Storm About To Burst” is about the explosion at the end of a long fuse and the reckoning that comes next.

Mike: We all get behind Jay's lyrics 100%. I think every song has a few lines that anyone can connect with even if they don't know exactly what the songs about. The lyrics to “Moments That Define” floored me. Especially since the music was inspired by a very special time in my life. “They Just Want War” is another favorite of mine lyrically.

CLICK BELOW TO STREAM OR BUY "THE FUTURE OF" 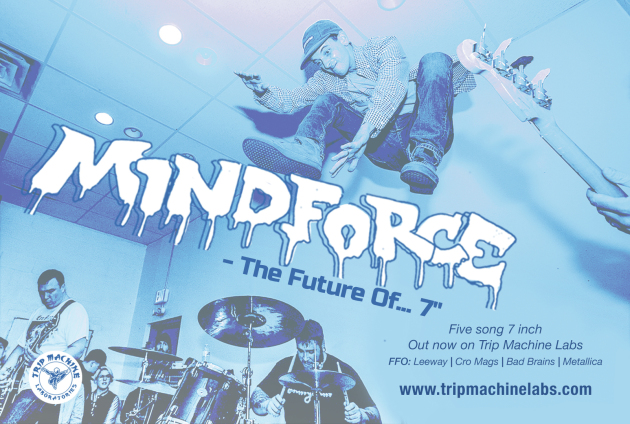 IE: What kind of things are cooking in the Mindforce labs? You guys seem to be on a good pace with writing new music. What is next?

Jay: We have two records coming out this summer - "The Future Of..." on Trip Machine Labs and the vinyl press of our demo on Coin Toss Records. Up Next is a split 7" with Dead Heat, an amazing band from California.

Mike: We always have a good amount of songs and parts to work with even though we don't practice all the time. We were able to get 3 new songs together for the split 7".  We recorded at Gate 4 Studios again with Will Hirst. Will recorded, mixed and mastered the demo and...”The Future Of” as well. We love working with him and getting to record the music live.

IE: Is Mindforce looking to do touring? Or just weekends closer to home? What have you guys discussed and what are your plans for playing out?

Jay: We want to play out as much as we can and anywhere we can get to! Thanks so much for the love Chris and much respect to In Effect. Shout out to the NYHC, HVHC, LIHC, CTHC, WMHC scenes! 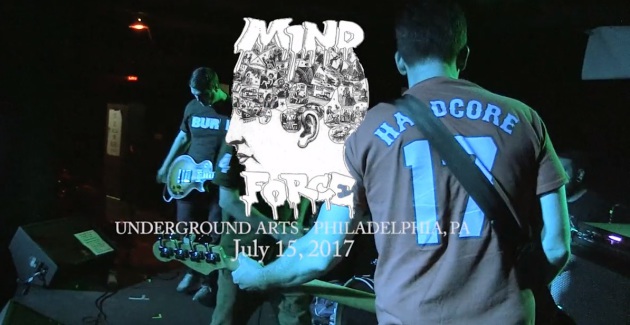