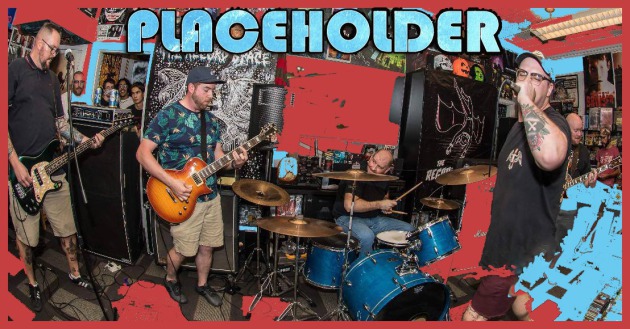 Saint Louis’ PLACEHOLDER got their start in the fall of 2018 and to date have one official release in the 6 song EP titled “Impromptu Cigarette Magic” which came out this past June. The band consists of: Aaron – bass, Darrell – guitar, JB – guitar, Travis – drums, and Nathan – vocals. When this interview was done in September the band had only played a total of 7 shows, all in their hometown of Saint Louis. Placeholder play a catchy style of punk meets hardcore that was compared to bands like Strike Anywhere, Paint It Black as well as Strung Out in our review of their EP. This is kind of interesting info considering that four of Placeholder’s five band members currently play in the beatdown style hardcore band Tensions Rising. Previously, members of Placeholder have played in: Perfect People, Sore Throat Syndrome, Cardiac Arrest, Modern Man, Death Horse, Lamentors, Rowsdower and at a much younger age bassist Aaron played in a Christian ska band called the Chrishtones. In the last few years Saint Louis has really come on as a stronghold for hardcore in the Midwest with bands popping up at a rapid pace while all seemingly doing their own thing sound wise. Placeholder sounds nothing like RedBait who sound nothing like Time & Pressure and that is just scratching the STL surface. Read on to see what vocalist Nathan Lehmann had to say in this Sept. 2019 interview. 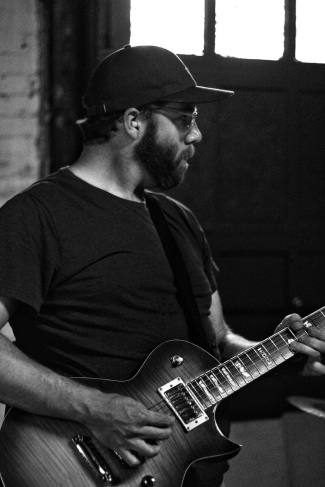 IE: What’s up guys? For myself Placeholder seemed to come from out of nowhere. I never heard of you guys until another STL band posted about your EP coming out. I instantly loved it and played it twice in a row and have easily listened to it 25 times since early June. When were the first practices for Placeholder held? I know the EP came out digitally in June and I am guessing you guys were not a band for very long when this happened.

Nathan: We really appreciate you taking the time to get a hold of us! Placeholder had our first practice in the fall of 2018 and we finalized our current lineup shortly after. We started working on the EP in March of 2019 and we had only played two shows at the time of its release.

IE: From the review we gave you here at In Effect and from talking to others about your sound you have been compared to bands like Kid Dynamite, Strike Anywhere, NOFX, Strung Out, and more. Shit, our writer even gave a comparison to Placeholder possibly being like a 5 tool player in baseball… the type of player (or in this case band) that can do it all. Those are all some big shoes to fill. So my question here is when you guys started talking about putting together Placeholder and actually got down to having rehearsals what kinds of ideas were you all bringing to the table? When any new band is started each individual person has to have their own vision of what they want the band to be. Finding that happy zone where everyone is satisfied with the music has got to be one of the hardest things to do. What are your thoughts on all of this?

Nathan: Our drummer Travis actually wrote the music for the EP before we started Placeholder. We decided to do the songs because we thought it was a good time to do something that was a bit out of the box in comparison to the field of bands that are out currently. Even though the music was written in advance, the songs on the EP really came into their own during the lyric writing and recording process. 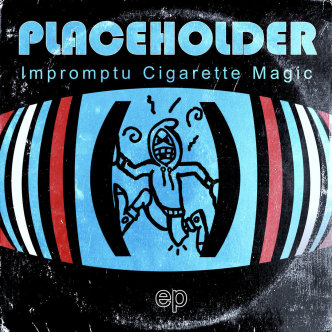 IE: Tell us a little about "Impromptu Cigarette Magic", first off that’s one crazy ass name for a record…

Nathan: “Impromptu Cigarette Magic” is a joke between the band and the guy who did the cover art. Basically, our friend Luke is a magician and he dropped a cigarette on the ground and it broke. He bent down to pick it up and throw it away and our guitar player Darrell said, “I thought you were going to do a magic trick and put it back together”  Luke chuckled and said, “I don’t do “Impromptu Cigarette Magic”. We knew in that moment that we had our title. Lyrically the EP is pretty diverse. It deals with not feeling good enough, family issues, and of course every good record has a few love songs. There is one song that is worthy of a deep dive. “Rancor” is the most deeply personal song on the EP. My mentor and youth pastor who cheated on his wife and left her with a young daughter. It was a way for me to give my mentor and youth pastor the exposure he deserves and ultimately try and put the ill will behind me. Deep seeded anger will consume you and will warp your view of the world if you let it. Shout out to that guy.

IE: The EP was recorded in your guitarist's basement I see as well. I think you guys got a really good sound out of this record. Unless JB has some pro equipment in his basement I have to give you all a lot of credit for what you all did here.

Nathan: JB is really passionate about recording. Here is what he had to say… "The EP was recorded using mostly in-the-box stuff... Superior Drummer 3 using e-kit MIDI, Kemper Profiler for direct guitars, Neural DSP Darkglass for DI Bass (killer plugin!), iZotope Ozone and Neutron 2 to get starting points for mix/mastering. Oh, and Waves Abbey Road mastering console for adding some analog feel. Crazy what you can do at home nowadays!"

IE: The cover artwork kind of jumped out at me too. Who drew that character and what exactly is he doing?

Nathan: We wanted the cover art to give some real 60’s and 70’s vibes. I handled the rough concept and our friend Luke really brought it home with the final layout! I designed the character. The vision was to have an MXPX “Pokinatcha Punk” with some hardcore style. He is trying not to get squished by the parentheses.

IE: Why the name Placeholder? Were there any runner up names that were being kicked around as possible names that didn’t make the cut?

Nathan: We landed on Placeholder because we couldn’t decide on a name and we had our first show booked. The promoter needed a name and we were texting about band names when someone said we should use a placeholder name and I said “why don’t we call ourselves Placeholder?” 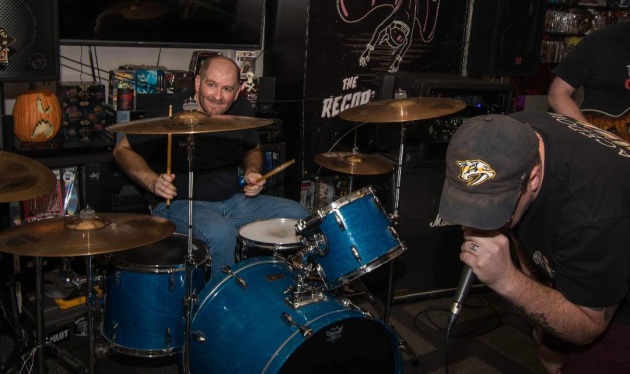 IE: From following you guys on social media I have noticed a trend of you playing at not your run of the mill types of shows or venues. I have seen stuff listed at a coffee house, a flea market, “Uncle Dave’s 55th birthday party and a STL barbeque. Can you talk about the shows you have played so far, the reaction you have gotten at these shows and just the general response the band has gotten? The landscape of hardcore in 2019 is filled with a lot of bands and fans of the heavier beatdown hardcore style and I just wanted to see how the response has been to your more melodic type of style.

Nathan: Out of the box shows are our bread and butter. Saint Louis has a ton of cool spots for bands to play. Most of our shows have been insanely fun. Hardcore is pretty saturated with heavy bands but the response to our band has been really positive. Honestly, we are blown away that people seem to care at all.

IE: Are there more songs already completed besides the EP tracks? The EP is maybe 7 or so minutes and I always find it interesting how newer bands without a ton of material fill up their live sets.

Nathan: We have a whole batch of new songs that we have been adding into our set. We have also covered MXPX and Blitz.

IE: I know the EP came out only a couple of months back so it is still brand new. When could you see the follow up coming along?

Nathan: We are in the process of recording a brand new EP. The new EP is a bit different than the first. We are leaning on some other influences and going to be traveling into Revolution Summer-ish territory. I think fans of “Improptu Cigarette Magic” will love the new songs. We have gotten great feedback from the people who have heard them live. Recording should wrap up by October and it should be out by Christmas.

CLICK BELOW TO WATCH PLACEHOLDER PERFORM THEIR SONGS "RANCOR" & "SICKNESS/HEALTH" 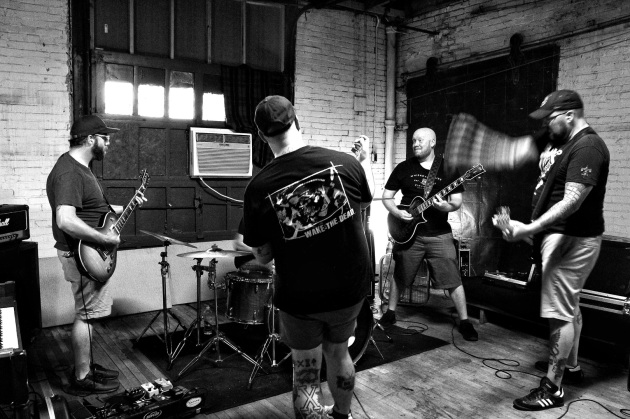 IE: The band has been gracious enough to put together a 2 song live “rehearsal room” video for us for use in this interview. Can you give us some background as to what we are seeing and hearing in it?

Nathan: The video was recorded during our practice at Utopia Studios in Saint Louis. The first song is “Rancor” from our EP. The second song is called "Sickness/Health" and it will be on the next EP.

IE: Have you been drawing any interest from outside of the homefront of St Louis? How far away have you guys reached people through social media, reviews etc? What kinds of correspondence has been coming in?

Nathan: We have had a few people from other states say nice things about the EP. An Italian blog gave us big ups, which is kinda mind blowing. 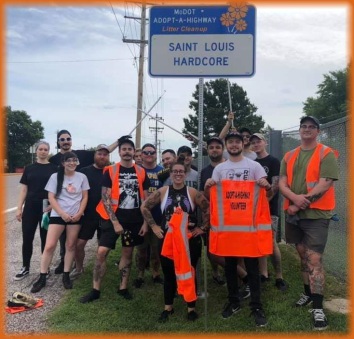 IE: The Saint Louis hardcore scene to me is one of the more active scenes that I see out there from covering bands from all over. We have checked in with bands like Red Bait, Better Days, Time and Pressure and now Placeholder. It is a diverse scene with different sounds but all unified from this outsiders perspective. You guys even recently did an adopt a highway program and had a bunch of people come out to get their hands dirty. Can you talk about this and the feels and vibes of what you see in STLHC right now?

Nathan: All the bands mentioned above are our homies, and some are former bandmates. STLHC is the best!  We have so many great bands and people that are invested in building up the city we live in. The Midwest is often overlooked which is unfortunate but, I really feel that the “Stick Together Mentality” has made our local scene much more vibrant.

IE: How many times have you been to the top of the Gateway Arch? I visited your city about 15 years ago and didn’t know at first that you can actually go to the top of that thing! STL is a nice city and had a bunch of things to do. Can you maybe give some tour guide tips for bands passing through your city or for those reading this that don’t want to visit various travel sites.

Nathan: The cool thing about STL is it has a lot of attractions that are cheap/free (good for touring bands). The whole Forest Park area (zoo, history museum, art museum) can fill out a lot of downtime, and it's all free!  If you're willing to pay a little, I really dig City Museum. It makes you feel like an easily-injured kid again.  Been to the top o' the arch three times now. It's awesome if you can do it at night. 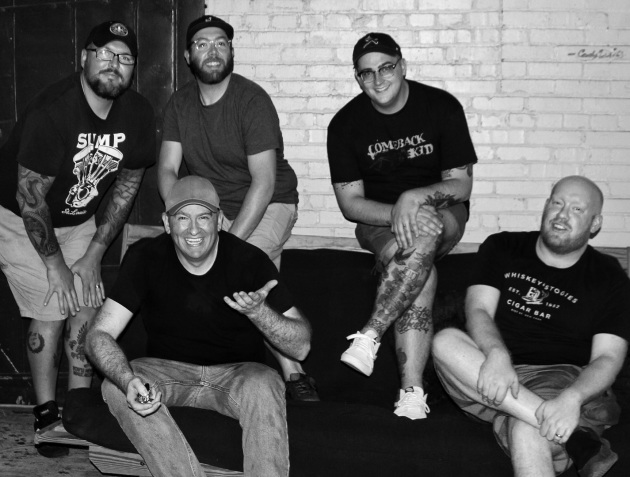