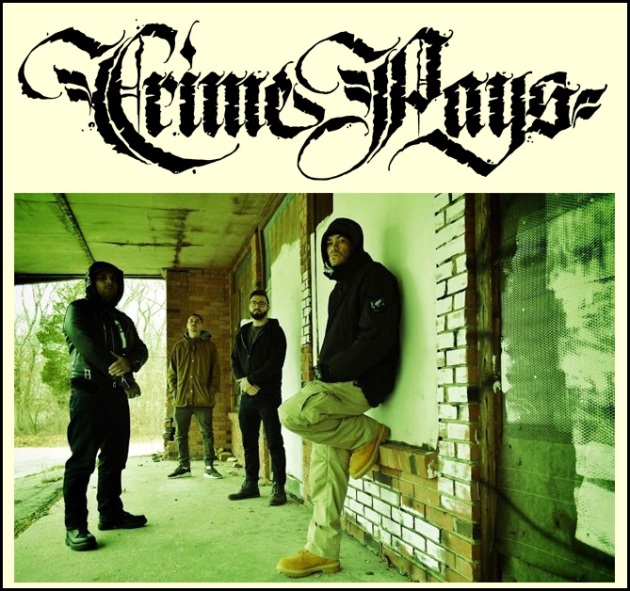 Crime Pays are a brand new band coming to us from Long Island neighborhoods that stretch from Hempstead to Mastic Shirley. I first found out about this band when their singer Mike Rubino (Tension*, 1776) told me he had a new band going in late 2019. They have already dropped a song called “Divide And Conquer” off of their new EP titled “Corruption At Its Finest” (out March 31st) and are now dropping another new one titled “Close To The Edge” which you can check out below! To date Crime Pays has only played three shows and this interview took place after their second show which was in the basement of a strip mall in Coram. The scene was the loading area of a dark parking lot behind the mall as the show had just been shut down. Due to a semi-chaotic setting with a few interruptions portions of this interview were cleaned up after the fact via email. Rounding out the Crime Pays lineup are: Tom LaSala- bass, Matt Kelly- guitar and Johnnie Luca- drums. 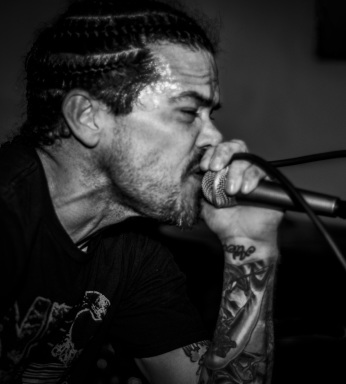 IE: What’s up guys? Can you tell us when the band got its start and what were some of the ideas that were coming together when you first started kicking around the idea for Crime Pays?

Tommy: In 2019 we started this band on the principles to preserve Long Island hardcore and to put out a timeless record that people will still listen to 15 years from now. Some of our biggest influences are Biohazard, Madball, Terror, Cold As Life and Hatebreed where these bands lived what they did. We live our rhythms and riffs and the lyrical content within. On top of playing with each other every week we spend a lot of time together, talk to each other every day and go through a lot of the same struggles. Long Island is seeing a hardcore renaissance and there are a lot of good bands but nobody is really telling our story, the shit we have to go through every fucking day in our neighborhoods and homes.

Matt: From the songwriting aspect there are a lot of quality bands out there but not many of them are really writing songs, just parts. When I tapped Mike and Tommy to start this band with me I knew they had the skill, talent, attitude and lifestyle to do this for real. It took a few drummers before they would even come into the room but once I jammed with Luca I knew he would be our guy, despite never being in a hardcore metal band before. His classically trained drumming executes our dynamics perfectly. Playing in this band takes more than skill alone, it’s a mindset, a lifestyle... as real hardcore should be.

IE: Can you tell us about the new single that just came out the other day and the EP that will follow?

Tommy: “Divide And Conquer” dropped the other day to a great response. “Corruption At Its Finest”, the 5 song EP will be coming out March 31st. We will be having a record release show at some point at either a strip club or a new waterfront venue in Port Jefferson on Long Island and have Hangman, The Ice Cold Killers and The Great Lie in mind to join us. Cassette and CD release initially but we have spoken about releasing 7” singles and a vinyl LP. The traditional record label is dead and in DIY fashion we did everything we could to raise the money it took to do this record properly. Joe Zajack and Frank Bones helped us carry our production vision in the studio as engineers and we tapped King Yosef to master the record for us and plan to have remixes, one in which he’ll do.

CLICK BELOW TO HEAR THE PREMIER OF "CLOSE TO THE EDGE" 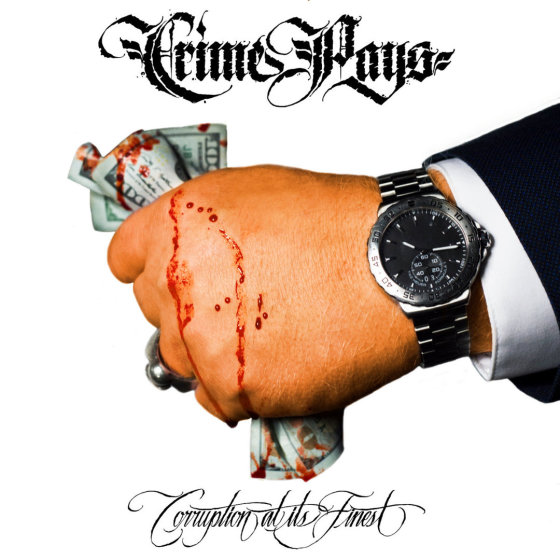 IE: Your singer Mike was the frontman for both Tension* as well as 1776 and from seeing you guys play tonight I could immediately see and hear that those bands play a big part of what Crime Pays is about.

Tommy: We are street wise hardcore carrying the torch of the Tension* family tree from Coram to Hempstead and everywhere in between. We respect a lot of the hardcore bands from Long Island and NYC that are out right now, but were doing it in a way that no one has been doing… representing where were from. We are talking about our everyday personal struggles, talking segregation, the destruction of the family unit, the war for your mind. We are talking about political corruption from a gut level that no one else is doing. Most importantly we want to inspire others to rise above and fight their way through anything.

IE: A lot of what Mike has done lyrically in the past has been thought provoking to say the least.

Mike: The root is a liberty minded message. Nowadays the main stream media is preaching a society of ignorance, corrupting the minds of the children. They want to give you the chemical compound, the chip… fill you with fear. Look around you… we are on the brink of a state of total control. The lyrics of this band are a journal entry of my reflections of society, my day to day routines with family and close friends, the struggle, talks with my bandmates Matt and Tommy regarding topics we all strike together on.

Matt: Usually it’s mind expanding sessions that entail conversation rooted in politics locally which effect us daily. We like to plant conceptual seeds and see where Mike goes with them.

IE: From what I understand the way you present the name Crime Pays is more from a perspective of pointing out political corruption and white collar crime. At least that is what I get from the album cover and more so from the bands posts on social media.

Matt: Correct, we are the voice that won’t be silenced. We are the knights of accountability.

Mike: We are here to speak against the globalist agenda. The master plan, us versus them. The top down and shoving it back in their face. Simplifying in the form of a song all the wrong that’s going on.

Tommy: We are not social justice warriors behind a computer screen. We are street level people who believe in community, solidarity and the power of real knowledge. I have and always will be a target to the local bureaucracy for the things I refuse to be silent on. Progress of human civilization in the area of defining human freedom is not made from the top down. No king, no parliament, no government ever extended to the people more rights than the people insisted upon. Art’s task is to save the soul of mankind or at least try… at its best it awakens people to realities that exist outside the rat race 9 to 5 and the illusionary facade. The truth is more clear now than it should appear. 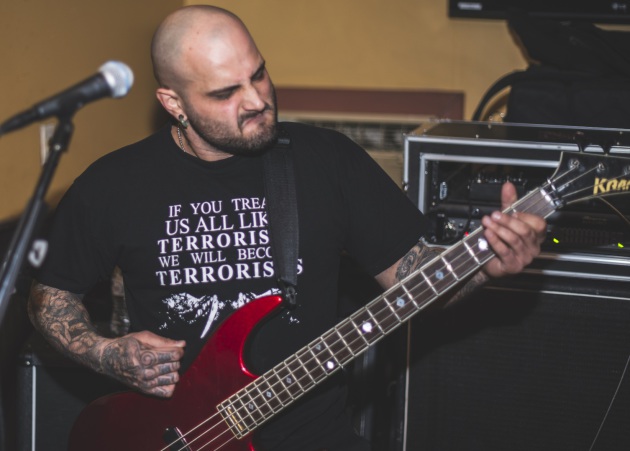 IE: The list of Long Island neighborhoods you guys call home pretty much goes against the national perception that Long Island is an island filled with the filthy rich living it up out in the Hamptons. What was it like growing up on Long island like for each of you?

Matt: I was a problem kid who rode the small bus out of district. I saw the corruption though… gatherings at an early age for Super Bowl party’s… most of my friends’ families were rooted in the underworld, cars and coats as Christmas gifts so lavish you’d wonder where the money came from. Some of my friends had season tickets to the Rangers. I was lucky to see the Islanders in Uniondale maybe twice a year. We were forced to move upstate by the time I was 13 to get by. It was a blessing and a curse for a teenager. I ran with a couple crews and earned doing just about anything I could to one day have dreams and accomplish them. I got away with more than I ever could have on Long Island. With wages low and no hopes for a future I moved back to Suffolk for the paper chase. After being raided by homeland security due to my landlord being a coyote for MS-13 I decided I’d be better off elsewhere. I now reside in East Setauket where corruption is rampant for inspiration.

Tommy: Just thankful to have grown up in an era before the technological rape of our culture in the streets with my friends... the life lessons and memories there are invaluable. Coming from a long bloodline of blue collar, real men - a hard work, struggle, get through anything old school mindset is deep in my DNA. My version of Long Island is a stark contrast of many others that I’ve come to know. Tragedy and beauty forever surround me simultaneously. I’ve seen everything and there are some things I wish I’d never seen at all. At a young age I learned things were done differently in my zip code.

Mike: Shirley... the whole region. Mastic Shirley growing up with my friends and all that went with that. There’s a stigma to that area… much of it warranted. A lot of my formative teenage years were being the frontman of Tension*. My whole life revolved around a hardcore lifestyle early and learning the ways of the world.

IE: What are some of the things you actually liked about growing up and living on Long Island?

Tom: Nature… the access to beaches and parks is a 15 minute drive anywhere. It’s rich cultural history that many often don’t care to learn about, it’s creative people. Being from Nassau, my close proximity to the best city in the world.

IE: Having Mike as your singer gives Crime Pays a boost in that fans of his old bands will at the very least give it a chance when they see he has a new band. For people reading this that may not go that far back with the history of Long Island hardcore can you tell us about the mark Tension* left on the LIHC scene?

Tommy: The Tension* crew had our backs before we entered a jam room. That line of LIHC is the real deal and the seeds left by that band are heavily felt today. A decade younger than Mike, I grew up looking up to him and his brother Joe Rubino. There were very few 90’s LIHC bands who could draw 800 people on their own, Tension* was in that exclusive group and anyone who was around those years remembers the magnetism of the band and the way they could control a room. Local bands like them would influence me at 10 to start hardcore bands of my own and by 15 was playing sold out CBGB’s matinees. I never looked back. Now Mike is family. Outside of the boost Tension* gives us, both Matt and myself have made a name for ourselves in underground culture and are respected nationally in the worlds of metal, punk, hip hop, industrial, graffiti and activism. We are a “new” band but the three of us have actively been involved and living hardcore for 20 plus years.

Matt: The 516 Long Island Hardcore comp, '97 at Deja shows are still the subject of conversation. It’s more about the gathering that would ensue when word of mouth and handbills spread the word of the shows. Everyone seemed to own a part of that history held sacred by the ties and friendships built still to this day. I met Mike in the street and never really thought of him as the lead singer guy but a friend. I guess you could say he found me.