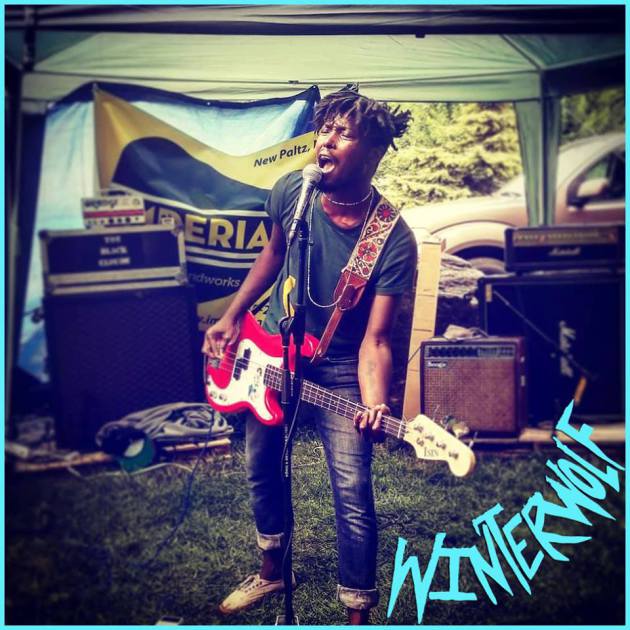 Winter Wolf are a NYC based 2 piece punk band who I found out about after missing their set at Punk Island here in NY in June of 2018. I know… find out about a band AFTER missing their set? Doesn’t sound right but that’s how it happened. They play regularly but have this feel of mystery surrounding them with odd lyrics, no official releases and not a whole lot of info about them if you drop their name into a search engine. I hope this interview changes some of that and that they continue their organic growth as they are definitely a band with a growing buzz and hopefully new music out soon. This is the first interview I can remember done through Facebook messenger as well. Jehiel Winters is Winterwolf’s bassist/singer and Joe is on drums. Check out what Jehiel had to say in this interview that took place on January 18th, 2019. Photos by: Aleda Gagarin, Joshua Daniel Martinez + Michelle Mennona with some other shots provided by the band. 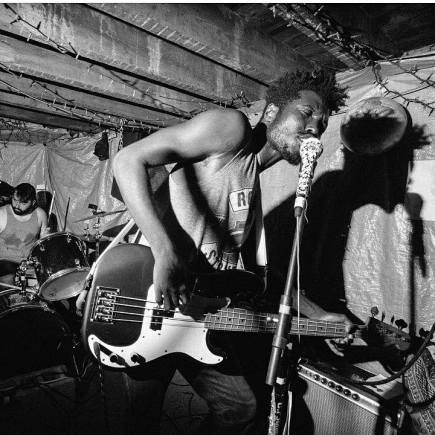 IE: What's up Jeheil? Where are you right now and what would you usually be doing if you weren't answering these questions?

Jehiel: Hey, coming to you live from Harlem NYC and I'd probably be making a meal right now. #feedthepack.

IE: How long has Winterwolf been a band and how did the band come together? I saw in another interview that you did that at the time you started this band you had cancer. Was being sick somehow the thing that jump started the whole Winterwolf idea?

Jehiel: We started about a year or so ago. As far back as 2016 maybe? Joe and I had been in another band before this. One that we both were fired from. This band came to me at a very difficult time in my life. I was suffering from a rare bone marrow cancer and I had a vision of this band during a weird chemo/fever dream.

IE: One of the first things that jumps out with Winterwolf  is that there are only 2 of you and yet it sounds like a full band. Why do you have this setup and do you ever plan to get more members involved?

Jehiel: Yeah, there are only 2 of us. Personally, I think its Joe’s drumming that gives us our dynamic. We work really well together. We just play whatever feels right. For a long time, we were searching for another member but I think we'll stay a 2 piece for now. This band is always looking to expand though. 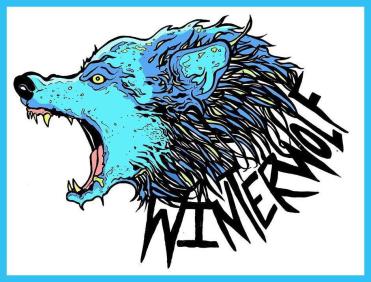 IE: Do you have to do anything weird/different/crazy with your bass to get the sound you are getting? When I hear some of your songs your bass almost sounds like a guitar.

Jehiel: Yeah, I like our guitar sound! At first, we weren't using any type of effects but gradually I started to expand. I like to keep it simple. I run through a Marshall stack, gain pedal and a wah pedal. I think the secret is high treble honestly. There aren't a lot of bass players with my sound.

IE: Winterwolf has no official releases. You have songs online but nothing official like a CD, cassette or vinyl release. Why is that and do you plan on changing that with whatever it is you put out there next?

Jehiel: Yeah, not having anything physical is done purposely. We want people to be drawn in by the sound/vibe first but we have been having an incredible demand for merch so we'll change that for the future.

IE: What other bands influence Winterwolf's sound? What kind of bands do you and Joe get into where you would say those particular bands have a direct influence on the two of you and what you are doing with Winterwolf?

Jehiel: As far as our sound? We both love thrash and punk. Joe is into Metallica and Municipal Waste. I love The Clash and Bad Brains. So there's a lot of common ground. That's probably why we sound larger than we are I think. 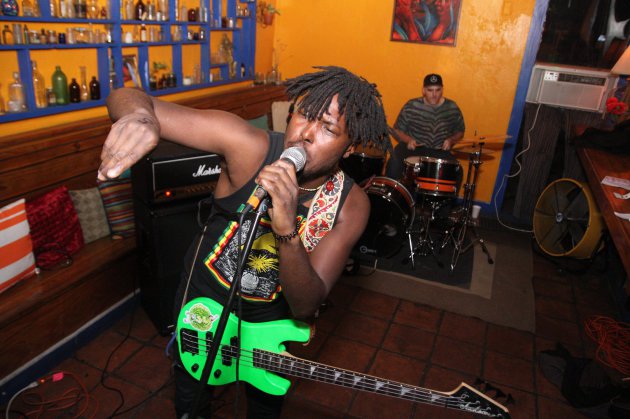 IE: NYC has a multi-layered punk and hardcore scene with a lot of different styles being played. A lot of different ideologies are in play and bands in one genre could quite possibly not even know about bands in one of the other "scenes" almost. How do you see the punk and hardcore scenes in the NY area and does crossing over into other parts of the underground scene within NY interest Winterwolf?

Jehiel: NYC has an incredibly diverse rock scene. We have played with a variety of different subgenres. Not to mention all the amazing touring bands that come through here. We aim to play as many shows as we can with whoever we can. There's a place here for everyone.

IE: About how many shows has Winterwolf played so far? What have been some of the better ones in your opinion and where have you played outside of NY?

Jehiel: We've played about 50 plus shows so far. .The response has been incredible. Some of our best shows have been the more smaller and intimate ones where we can really let loose and experiment. We always strive to bring it at our live shows. Every show can be a good show… don’t let anyone tell you different!  Outside of NY we've played New Jersey and Texas so far, hopefully we can go international this year. 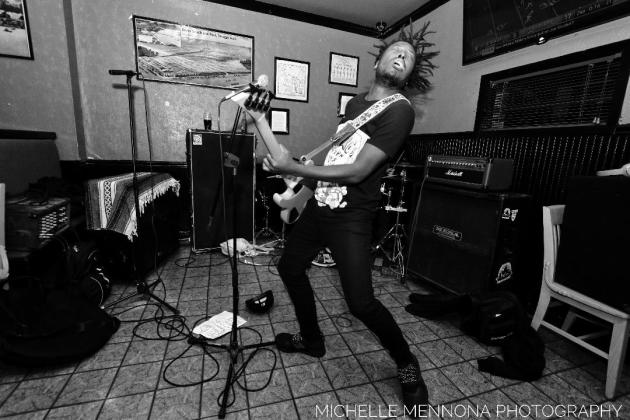 IE: How did you personally get into and find out about punk rock and hardcore music? What were some of the first bands or records you remember making an impression on you?

Jehiel: I remember going to church to watch the house band rock and move the crowd. That's my first experiences in rock. From there, I fell in love with hip-hop. Cunning lyrics and dope beats! What's not to love!? But one day I had an uncle hand me a guitar and I'm still playing. Then I found bands like Bad Brains, Sex Pistols, The Misfits and The Clash, who still influence me today.

IE: Some of your lyrics are kind of out there and make me hope I never find myself in a dark alley along side you. Haha. “Flesh”, “Dead Body Fuck Party” and “I Found A Body” come to mind in regards to this. Are your lyrics meant to be more joking around, are you into horror films or do people maybe have to be careful around you? Haha.

Jehiel: I read a lot of sci-fi/horror. I always loved the dark atmosphere in it. I wanted to create the same creepiness but keep it fun at the same time. But with a song like “I Found A Body”, I'm speaking on the heroin/opiates epidemic. I don’t want you to be that body I find on the walk home.

IE: You were telling me you are working on new songs and should have some new music coming along soon. Can you tell us about the new songs? Maybe some titles?

Jehiel: Yeah, we've been working on new music and we recently added them to our set. “Let It Go” and “#immacreep”. These songs go perfectly in our sets. It continues the pattern of creepy and powerful. As far as a new release, I'm looking forward to it, maybe in March..

IE: Last words before we go?

Jehiel: Always love yourself so we can take care of each other. We're on in this together. We can rely on each other.

Hey babe you say you want a three way

What about that body on the freeway?

A rotten corpse, a good meal for two

A rotten corpse for me and you

Well you know if the feelings right

A rotten corpse, a good meal for two

A rotten corpse for me and you

Give us something good to eat

We only want those feet

Who'd ever thought they'd be so sweet 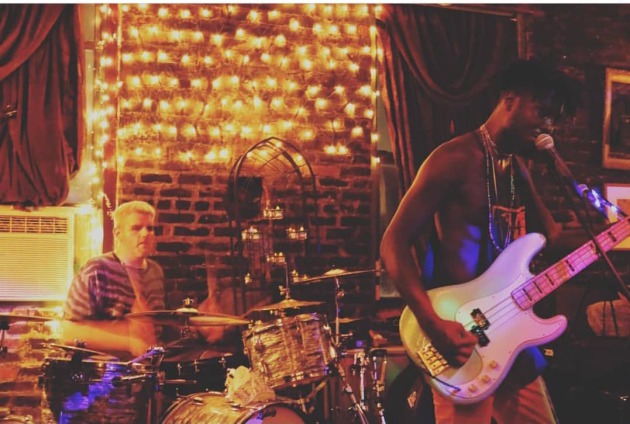