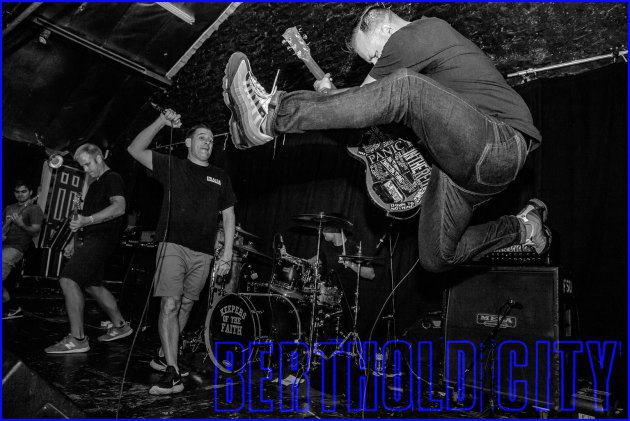 Berthold City are a new band out of Los Angeles, CA that are sort of flying under the radar a little bit… almost by choice as they have chosen not to promote their band members previous work which is commendable. Their 3 song “Moment Of Truth” demo came out in July, has been getting some nice buzz and more songs seem to be on the way pretty soon. This interview took place in early December with their singer Andrew who shed some light on this band that is still somewhat of an insider’s secret to some. The rest of Berthold City is: Dennis – guitar, Devin – guitar, John – bass, and Adam – drums. 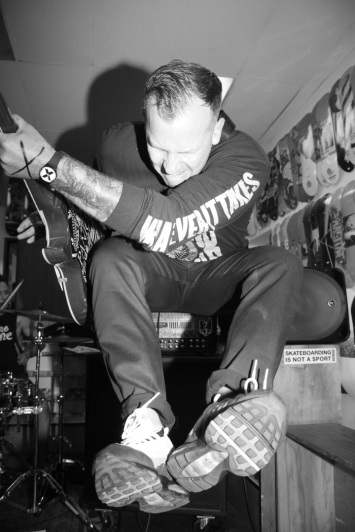 IE: Hey Andrew, how did this band come together? You were telling me before this interview that when the band started it was just you doing vocals, guitars and bass along with your drummer. The two of you also recorded your demo by yourselves kind of like old school Judge style.

Andrew: I’m always writing songs… I had a handful of songs that were more Youth Crew inspired, and a bit of a different style than either of my other bands. I got together with Adam (our drummer) and we spent a day in the studio fleshing out the songs and tracking the drums for the demo. I played bass and all the guitars on the recording, and then went back a few months later and started tracking the vocals. I have never sung in a band before, so I really didn't know what to expect… We did the vocals for “Left For Dead” first, and Aaron (who recorded the demo) and I were both really happy with how they came out. After that I would head down to the studio every week or so and finish another song.

IE: When you went in to record for the demo was it just the 3 songs you recorded or did you record any others?

Andrew: We actually recorded 6 songs total in that first recording session. We released the first 3 as the demo, but all 6 will be released early next year as a 7” on my label, WAR Records.

IE: This recording session was eventually mastered by Don Fury who has long been known for helping a lot of NYHC bands record their records and demos dating back to the 1980's. He is located in upstate NY these days. With you being in California how did the process work and was his inclusion on this something that you feel added to the overall feel and sound that you would not have been able to get somewhere else?

Andrew: We recorded the demo with Aaron Jamili from Alpha Omega. He is a really good friend of mine and he has a great studio that isn’t too far from where I live. Aaron was easy to work with and made the recording process painless. I always wanted to record with Don Fury as he is responsible for recording some of the most classic hardcore records of all time. I knew that he was doing a lot of mastering, so I reached out to him. He did a great job, and added that extra little bit of energy into the tracks. We could have mastered the record elsewhere, but I really wanted to work with Don Fury as a little nod to some of the classic bands that inspired us. 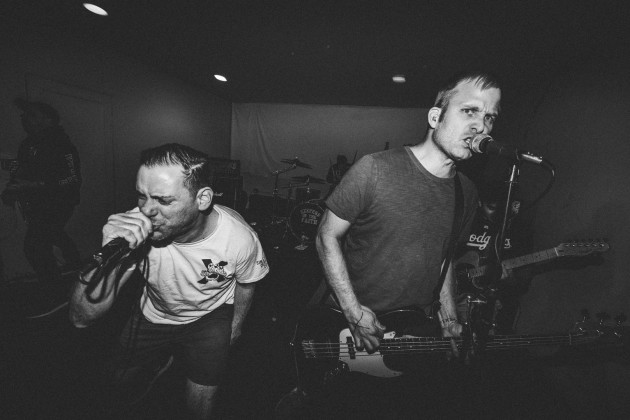 IE: Obviously you were not playing shows at first as a 2 piece although that would have been an interesting live performance probably haha. When you started to put together a lineup how hard (or easy) was it for you to find people that were into the style of hardcore you guys are playing? Any good stories from failed tryouts of people who didn't make the cut?

Andrew: It was a lot harder to put together a straight edge line up than I thought. I reached out to Dennis first, and once I sent him the songs he was immediately on board. Dennis hit up John and John brought in Devin. We didn’t really have any “tryouts”… Once everyone said they were down to play we just set up a few practices and that was it.

IE: For those who have not heard the demo yet what kind of hardcore punk is the band bringing to the table? What kinds of topics/subjects are you bringing up in the lyrics?

Andrew: Berthold City plays straight forward Youth Crew inspired hardcore… We are obviously influenced by bands like Youth Of Today, Judge, Side by Side, Insted, Chain of Strength, and others… We try to take these influences and create something that is more of our own rather than a carbon copy of someone else. A few people have compared us to bands like Carry On and In My Eyes and I can appreciate that. I think we have a similar spirit and we are obviously influenced by a lot of the same bands.

I have always thought that the message was as important as the music… That’s what separates hardcore bands from other genres… I worked hard to write lyrics with a message that were still simple and catchy.

“Moment of Truth” is recognizing your mistakes and taking responsibility for your actions. “Left For Dead” is about believing in yourself when you are feeling low or alone in this world. “Enough!” speaks out against violence within the scene. 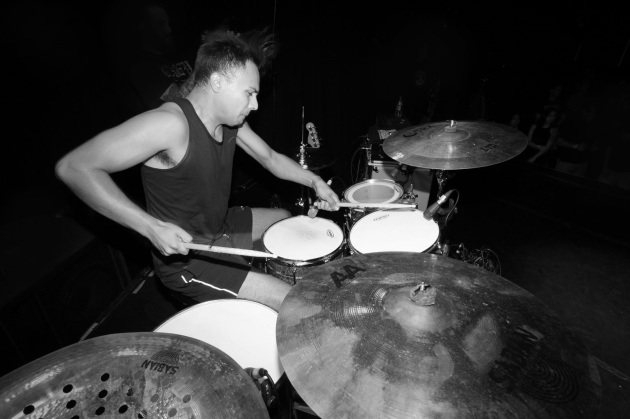 IE: Where does the name Berthold City come from?

Andrew: Berthold City is actually the name of a font used by bands like SSD, Chain Of Strength, Gorilla Biscuits, and many more. I wanted a name that was rooted in hardcore but was a bit different and maybe a bit less obvious.

IE: At the time of this interview you guys have played two shows with Decline from Chicago who invited you to open for them on a recent West Coast tour. How did that get arranged and can you give some details on the two shows you played.

Andrew: We released our demo and it just started spreading organically. Somehow the guys from Decline found it just as they were booking their West Coast tour. They were pretty excited about the demo and they asked us to play. Our first show was at Programme in Fullerton with Decline, Drug Control, Dare, and Bro Force from Russia! This show was awesome… I really didn’t know what to expect, but there was a great turn out and kids were moving around and singing along! A few days later we played another show with Decline, Drug Control, and Dare at All Star Lanes in  Eagle Rock. 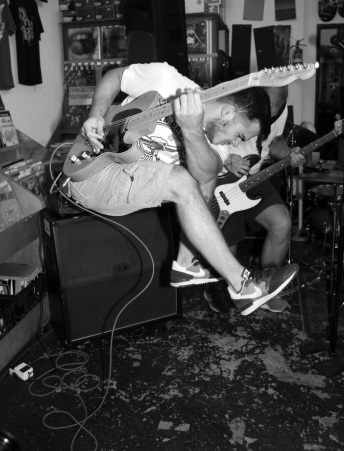 IE: When can we expect more shows and is playing out something you see as more of a local, southern California type of thing or does the band have plans for more out of area types of shows in the near future?

Andrew: We are heading out this week on a few dates with Terror and Regulate. We play Reno and then two shows in Arizona. We definitely plan on playing as much as we can. Our 7” comes out in the beginning of the year, so we should start playing quite a bit more once it’s out.

IE: Everyone in the band has experience in other bands with at least one of those bands being a pretty big name within the hardcore community. How come you guys have decided to stand back from using any of the "current/former members of..." tags to help push this bands presence?

Andrew: I just thought that it would be cool to let the music stand on its own merits. I wanted people to find out about the band organically and have it spread on its own.  Carlos from No Echo found the band and did a write up about the demo on his site. Ron from Brotherhood also discovered us on his own and posted about it on the Brotherhood Facebook and it kind of just spread from there. We wanted there to be a bit of mystery about who was in the band instead of just forcing the ex-member thing down people’s throats. I think it’s worked so far. A lot of my close friends didn't even realizing that I was singing for the band until they saw the photos from the show!

IE: You guys also do not have any social media page for the band which is not uncommon within the hardcore scene. Each band has their own reason for it. Care to share your reason for this?

Andrew: I think we just wanted to take it back to a time before there was social media. We made photo copied flyers to promote the demo, and we had a few different labels like Revelation and Reaper send them out with their mail order. I’m not against social media at all, I just thought it would be cool to have a little mystery about the band instead of giving everything away before the shows and stuff.

IE: We touched on the upcoming 7" earlier and there is already work on a follow up to that. Things seem to be moving along fast. What can we expect and when if you had to throw together a quick timeline?

Andrew: Scott Vogel, Patrick Kitzel, and I just put together a new zine called “Pressure Drop”… It’s a really sick 44 page zine with Zero Tolerance, Give, Samiam, World Be Free and more. It’s going to come with a flexi with unreleased songs from World Be Free, Zero Tolerance, Berthold City, and a few others. That’s the next release that we have. We are just wrapping up the layout now for the “Moment Of Truth” 7”… Jeremy Dean is doing it and it looks awesome! I’m super stoked to be working with him. He designed our logo and the first shirts that we released. I’m hoping that 7” will be out by March or so. We already started recording for our next release. We have 3 songs finished, and I’m hoping to track 2 more for another 7”… Other than that, we are just going to keep playing as much as we can! 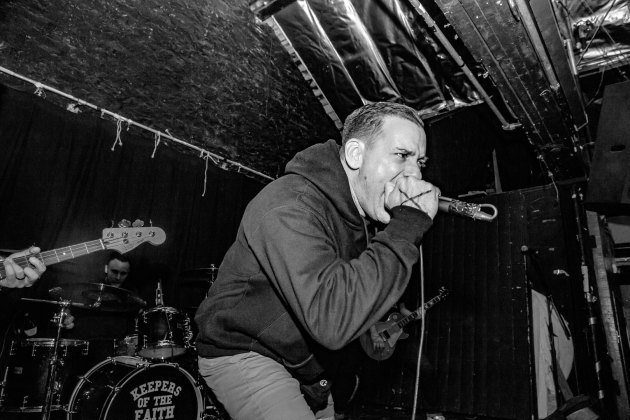 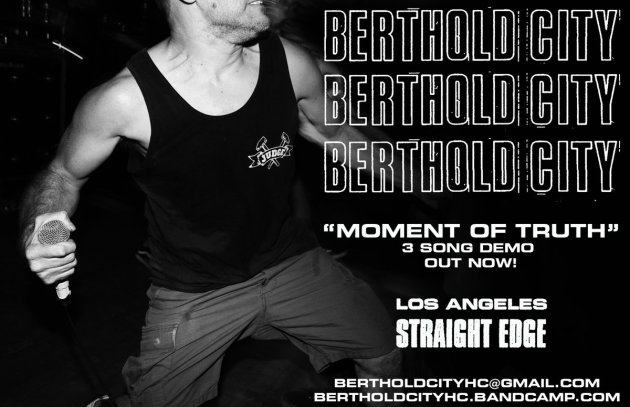