Puig Destroyer got their start on June 12th of this year when Ian (bass) and Riley (drums) recorded their 50th episode of their Productive Outs baseball podcast. The name Puig Destroyer comes from Los Angeles Dodgers rookie phenom Yasiel Puig who came up to the big leagues earlier this year. The band also consists of Mike Minnick (ex-Curl Up And Die) on vocals and Jon Howell on guitar. Jon and Ian also play together in the band Kowloon Walled City and Riley was in Thrice. Puig Destroyer’s debut EP is available now via digital download with the vinyl version coming out in September on The Ghost Is Clear Records. With band members living in Chicago (Mike), Orange County, CA (Riley) and San Francisco/Oakland (Jon/Ian) the band considers themselves purely a recording project who are already working on new material. 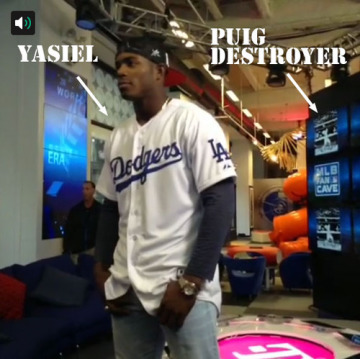 A FEW WORDS WITH IAN:

Ian: Riley and I are both fascinated by Yasiel Puig. The dude is just so raw and talented, and we absolutely love the way he plays the game. On June 12th, Riley and I recorded the 50th episode of our Productive Outs podcast. He made a joke about starting a grind band called "Puig Destroyer." We both laughed, then kinda went "hmmmm!" That night, Riley send me drum tracks for the first song. Nine days later, we released our first song on Bandcamp, "One Man, Five Tools."

IE: But you are from the Bay Area, shouldn't you hate the Dodgers?

Ian: I'm not a Dodgers fan per se, but I don't hate them either. I've been writing about baseball for a couple of years now and I've developed some objectivity about the game. I love to watch Kershaw, Puig, and Hanley play, regardless of the team they're on, because they're among the very best in the game.

IE: Have you tried to contact Puig and give him a shirt or a record or anything? Do you worry at all about maybe having copyright issues with MLB?

Ian: No one in the band has had contact with Puig, but we do know he's heard “One  Man, Five Tools” at the MLB Fan Cave:

I'm not worried about any copyright stuff. I assume they have better stuff to do than sue us, but if they do, it means we're getting the word out!

IE: Will we ever see this band play out or will the distances between the band members be too much?

Ian: It's VERY unlikely. We're all super-busy and live all over the country, and this is just for fun.