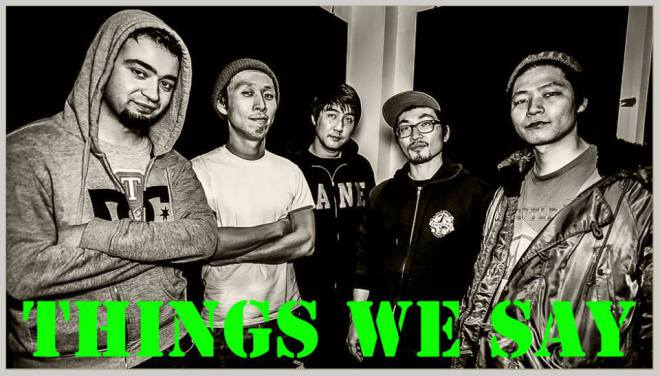 South Korea’s Things We Say is currently comprised of Victor (vocals), Unbreakable Jae (guitars), Bialy (guitars), Ki (bass) and Hyunjin (drums). TWS started back in 2004 when Victor was living in Canada and he recruited his friend Lenny from Hands X Down to play drums on a 4 song demo with Victor playing everything else. Later that year Victor’s visa expired and he returned home to Korea where TWS took shape and after a few lineup changes the band now seems solidified. A list of TWS releases includes their 2004 demo (CDR), “Our Decisions” (2007 full length CD), and 2013’s “Time To Change” (EPCD) as well as various compilation appearances. With over a few hundred live shows played under their belts TWS may not be “fresh blood” back in Korea but many American hardcore fans’ eyes were opened to TWS when the band headed over to play 12 East Coast US shows this past summer. The last of these 12 dates was day 3 of the This Is Hardcore Festival in Philadelphia, PA on August 10th. 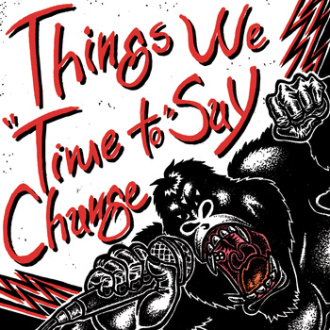 Stream Things We Say's "Time To Change" EP by clicking above

A FEW WORDS WITH THINGS WE SAY SINGER VICTOR HA:

IE: You guys are a Korean band but TWS started in Canada in 2004. Can we ask why you were in Canada at that time and what gave you the drive to start the band with you playing everything but the drums?

Victor: I was a student there from 2001 to 2004. I studied 3D computer animation in Toronto. I went to many local hardcore punk shows there and met so many good people. Without a doubt, I think it was the best era for Toronto hardcore. I was lucky enough to see No Warning, Career Suicide, Fucked Up, Haymaker, Cursed and some other great Canadian bands quite often while I was there. I shared an apartment with Beav and Laxton who were seriously involved in the Toronto hardcore scene then. I got so much inspiration from them and I wanted to start my own band so badly. I actually started a band there called, On The Brink with my friends, Chris and Alan, but we never really had a chance to play a show. I had to go back to Korea in summer 2004, and wanted to start a band in Korea. I had an idea for the band, wrote some songs and recorded before I went back to Korea. I could play everything but drums, so I invited my friend, Lenny to play the drums for me.

IE: This past summer TWS played at the This Is Hardcore Fest. How did you get on this show and how would you rate the response from the crowd?

Victor: It was great and I couldn't expect any better. The response from the crowd was amazing! We've been always wanting to do a US tour and we thought it would be so awesome if we could play a big fest like TIHC while we toured there. In January, I saw a post on the TIHC Facebook page that they were asking for submissions from bands who wanted to play at the fest, so I sent a box with our CD’s, T-shirts and some other stuff. A month later, Joe Hardcore mentioned on Twitter that it was one of the best submissions he ever had. I was so excited to see that tweet. I replied right away and told him that we really wanted to do it. After that, Joe helped us a lot to bring us to the US. We can't thank him enough. Simply, TWS’ tour couldn't really have happened without him. 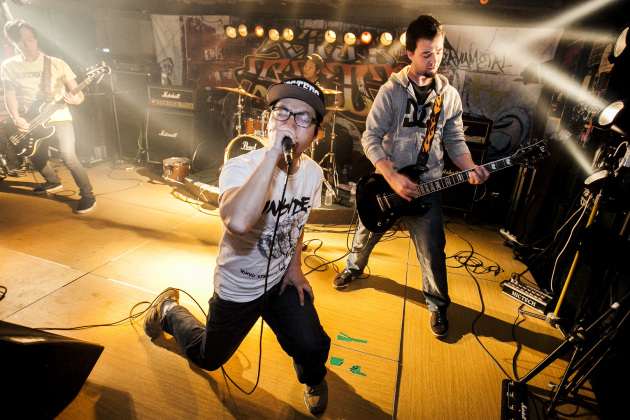 IE: Were there any memories from that weekend as well as the mini-tour that you will take with you for the rest of your life?

Victor: The whole weekend was one of the best times of our lives. We were so excited to play on the stage and so happy to see all the great bands and meet cool people there. We were in the US for 2 weeks. We started our tour in Syracuse NY on July 28th. We played 13 shows and played in Syracuse, Toronto, Dearborn, MI, Columbus, Indianapolis, Knoxville, Birmingham, Augusta, Charlotte, Richmond, Washington DC and Philadelphia. It was a great experience.

IE: On your last release you have a song called “Seoul Hardcore”. Can you tell us a little about the current state of hardcore music in Korea?

Victor: We have a great scene here. Shows are mostly happening in Seoul, but there are shows in other cities, too. The scene is not too big and not too small. There are punk and hardcore shows almost every weekend. There are great venues like Club Spot, Prism Hall, Club FF, Salon Badabie, 3 Thumbs, Moon and more. If there is a small show, there will be about 30 to 40 people show up. And bigger shows…there will be about 80 people. There should be more great venues and Korean bands that I forget to mention here, but The Geeks, 13 Steps, No Excuse, Today X Spot, Burn My Bridges, Combative Post, Find The Spot, The Kitsches, All I Have, Mixed Blood, My Man Mike are all great hardcore punk bands and if you're looking for heavier bands, they would be Vassline, Nahu, Scumraid, Gwamegi and Baran.