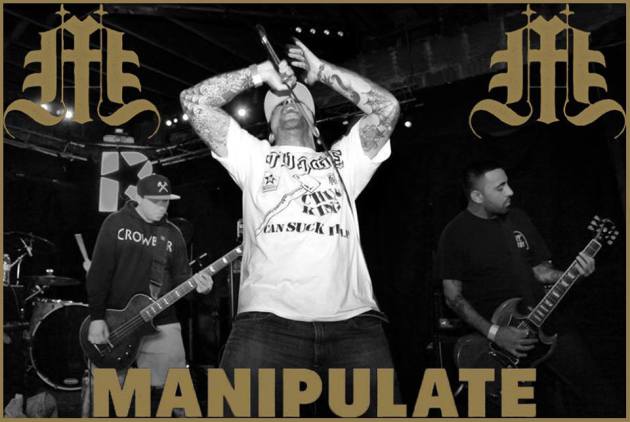 NY’s Manipulate got their start in early 2013 and released their debut 4 song demo this past September. The demo was recorded with Travis Bacon at Broken Box Recordings in Brooklyn and is now available via Flatspot Records on cassette after initially having been released as a digital download. The bands lineup is: Ivan Murillo (vocals), Corey Williams (guitar), Ricky Singh (guitar), Jonathan Buske (bass) and Lucas Anderson (drums). The members of Manipulate are also currently in Backtrack, Grudges, and Piece By Piece and in the past members have been in Terror, Carry On, Internal Affairs, The Promise, and Dead Wrong. You may also recognize bass player Buske as being part of the BNB Radio Takeover Show which is on Tuesday nights on East Village Radio from 8-10pm. Manipulate played their first show on Long Island in June with Trapped Under Ice and have played a total of 4 shows to date sharing the stage at times with Strife, Terror, and Judge. Upcoming Manipulate shows include December 19th at Asbury Lanes in Asbury Park, NJ with the Cro-Mags and December 21st at Santo’s in NYC also with the Cro-Mags as part of Diablo Fest 2013. 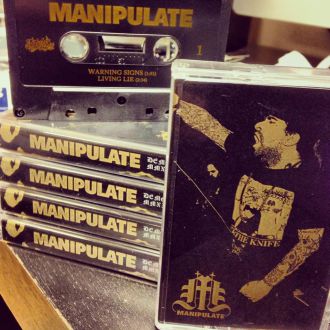 IE: So where does the Manipulate story start?

Buske: Manipulate started when Corey moved to Long Island from LA. He rounded up a few guys at the same time that Ricky and I were working on rounding up a few guys to do a band of our own as well. Corey needed another guitar player and a bass player and we needed the opposite, so it was the perfect timing to join forces. Having been long time friends and a fan of the bands he was a part of in the past, it was a no-brainer.

IE: Ricky spends a big part of his year touring with Backtrack. Have you guys discussed plans yet for Manipulate shows when Backtrack is away on tour?

Buske: We’ve already had to play a few shows without Ricky based on his schedule with Backtrack, but luckily it worked out OK. At this stage in the band’s life, we just want to play in front of people and maybe turn some heads, so if we have to do it minus a guitar player from time to time, it’s all good. As much as we’d love for Ricky to be there 100% of the time, Backtrack is a much bigger priority and we all respect that immensely.

IE: Have you guys discussed plans for touring yet and if so do you all view this band as a band that will do full blown tours or more along the lines where you do weekends close to your NY base?

Buske: We’ve briefly discussed doing weekends, but seeing as it’s a part-time band due to life priorities, we won’t be going very far for very long periods of time. If the opportunity to travel abroad or cross country arises and it’s feasible, we’ll gladly take up the offer, but we’re not prioritizing touring at all with this band.

IE: For someone who has not heard your demo as of yet can you describe the kind of sound and style that Manipulate is going for?

Buske: Abrupt, in your face, and groovy. If you like any of the bands we previously were a part of, you’ll get the idea of this one rather quickly. 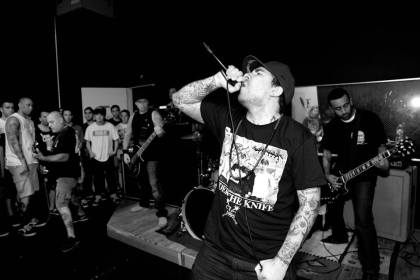 IE: The members of this band including yourself obviously have a lot of band experience but can you describe what it feels like to start all over again and build something brand new like Manipulate from the ground up?

Buske: It’s actually quite exciting and humbling. Things have definitely changed from my very first band up until now (some good, some bad) but overall, we really don’t have to do very much work to get the band name and music out there. One thing we are adamant about NOT doing is promoting the band as a “current/ex-members of…” band on flyers or things like that. We want the band to be as authentic and organic as possible and not use shit like that to persuade people into listening to or seeing us. We’re just a bunch of (older) dudes that wanted to do another band. Nothing more, nothing less.

IE: What’s upcoming for the band? When can we expect the follow up to your demo? How many songs does the band have now on top of the 4 on the demo?

Buske: We’re working on new songs now and have 3 finished up with a bunch more parts brewing. Everything is coming together well and the new songs are shaping up great. We’re going to have a new song on an upcoming NYHC compilation on Reaper Records and then either an EP or LP, if we’re ambitious enough haha…hopefully this spring on Reaper as well.