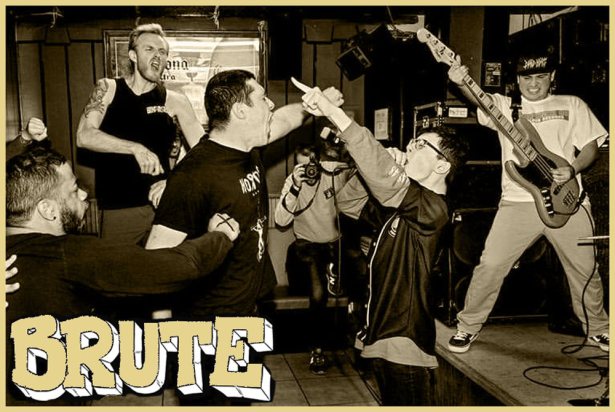 New Jersey’s BRUTE got their start in 2018 and to date have played approximately 20 shows. The band consists of: Matt (17) drums, Alexis (18) bass, Hubba (15) vocals, and Avery (21) guitar. In June of 2018 the band released their debut 4 song demo which was followed by the 5 song “Livin’ Right” demo that was released earlier this month. If you play both of these demos back to back you will see that Brute has made a lot of progress in the last 10 months. Drummer Matt also does the Jersey Slide Fanzine which has 8 issues out at the time of this interview. Brute’s brand new “Livin’ Right” demo sounds like the type of hardcore you would have heard coming out of the NYHC scene in the late 1980’s, something that is a little bit out of the ordinary when you take into account that no one in Brute is over the age of 21. The Fresh Blood page was made with bands like Brute in mind… bands that are in the early stages of their existence with a high upside. The band was interviewed on April 13th. Lead photo by: Mike McLaughlin. Graphics by: Bas Spierings. 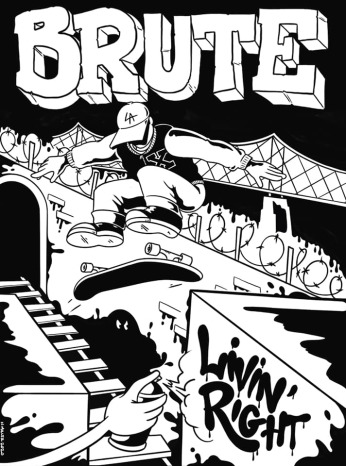 IE: What’s up Brute? Where are you at this very moment and how has this isolation period due to the coronavirus crisis been treating you? What has your day to day been like over the last few weeks?

Hubba: Right now I’m in my living room watching TV. I’ve just been chilling and getting my school work done.

Alexis: What up! I’m at my house catching up on movies, shows, and learning new stuff on bass. It’s treating me alright, just sucks this had to ruin my senior year in high school and now prom, our senior trip, and graduation is in the air.

Matt: Isolation sucks, every day I wake up, do some school work, go to work, skate a little bit after work and then go back home. Skating is the best part of my day, but I’d rather skate with friends than by myself.

IE: You guys just put out a 5 song demo called “Livin’ Right” which is the follow up to your 2018 demo. When I listen to them back to back it is obvious that this band has made a lot of progress in less than a year. Can you take us through the last 10 months with the band and can you guys also notice the huge jump in how you guys now sound?

Hubba: We got to play United Blood last April which was a lot of fun. Right after that we started working on new songs. I definitely think we have improved a lot since the demo. I joined the band right after that demo was released and since then we’ve played a lot more shows and have gotten better at writing songs.

Alexis: We got a new singer which is Avery’s brother, Hubba, before putting out “Livin’ Right”. When Brute started I had never been in a band or ever played an instrument so I was learning and getting lessons as we were starting up the band. We did not have a steady guitarist at first and then Avery came and helped us out. We got better and better when it came to writing and coming up with riffs as the months went by.

Matt: The 2018 demo was recorded in Avery’s basement and was kinda just like “hey, here’s a demo”, just to have something out. We had a different singer too before Hubba, so I think the main difference is definitely the vocals. But once Hubba came in we really found the way we wanted to go with this.

IE: The new demo is streaming online but it is also available from Edgewood Records on cassette. How many of you have a cassette player?

Hubba: I can’t speak for the rest of the band, but I have one.

Alexis: My record player actually has a cassette player on the side of it, but sadly it doesn’t work… haha.

Matt: I have a broken record player that also has a cassette deck that works, so that counts. But I honestly don’t want to get a better one because then it’ll give me an excuse to start collecting cassettes, and I’m already in too deep with vinyl. 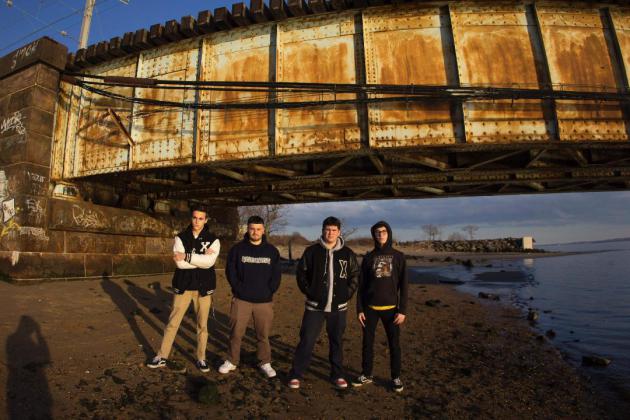 IE: What bands have influenced your style? When I heard the demo it brought me back to the NYHC style of the late 80’s. Also are there current day bands that may have had a musical influence on your sound?

Hubba: The two biggest influences for Brute are Breakdown and Floorpunch. When it comes to current bands, Blind Justice, Regulate and Combust are big influences on me.

Alexis: We all like Floorpunch so that band is kinda the main influence. NYHC as a whole as well we take influence from. As a band, we all listen to hardcore and every style it offers. There are definitely a lot of current bands we look up to for style and sound but I guess you can say just hardcore in general we are influenced by.

Matt: Definitely old NYHC, for me personally Breakdown seems like the biggest influence.

IE: Why the name Brute? Who came up with the name and is there any special meaning behind it?

Matt: So me and Alexis take a carpentry class at our school (shoutout Mr. White!) and the trash cans all say Brute, so one day I was listening to “Brutes Of Force” by The Rival Mob, and looked at the trash can and it just seemed right.

IE: Where and when was the first Brute show? Who did you play with? How would you say you all did for a first show?

Hubba: I wasn’t in Brute when they played their first show but I remember seeing them at E-Bloc in New Brunswick. Was that the first show?

Alexis: August 8th, 2018 in a basement in New Brunswick, NJ. The venue was called E-Bloc (RIP). We opened the show and played with our friends in Prospect and Anxious. I don’t remember from the top of my head who else played. We definitely messed up a few times during our set but it was a cool experience. Seeing our friends being hyped on us and going off was really dope to see. We covered the intro part of “Take A Stand” by Youth of Today for that set. 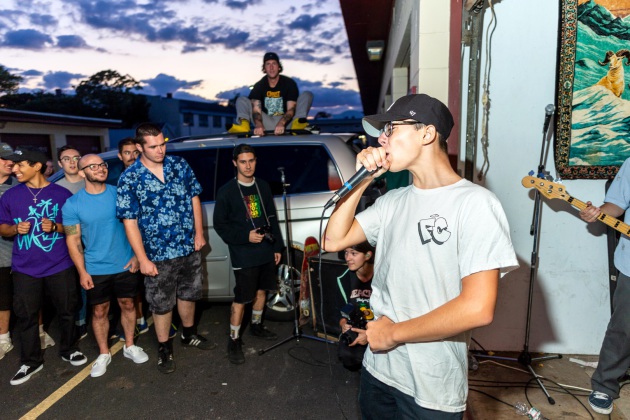 IE: Can you tell us about the show you played at an outdoor storage unit?

Hubba: That was sick! That was the Krust record release show. I liked that the show was all outside and there was a barbecue and people skating. Besides us and Krust, Regulate and Wild Side played.

Alexis: Someone from this band called Stag Party actually owns the storage unit I think. There’s been a good amount of shows that have happened there before that one. It’s definitely a cool spot for shows.

Matt: It was one of the coolest shows I’ve ever been too.

Avery: I brought pepper jack cheese to the barbecue. 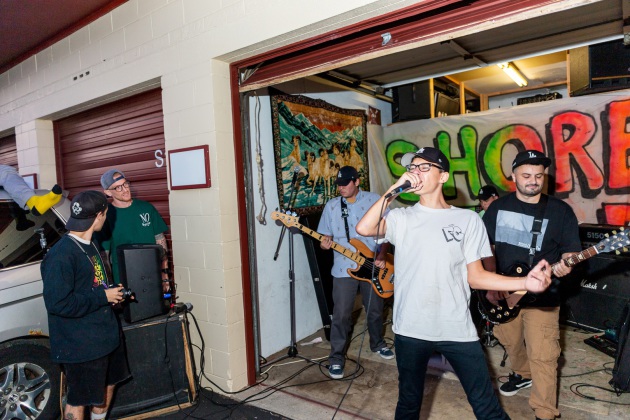 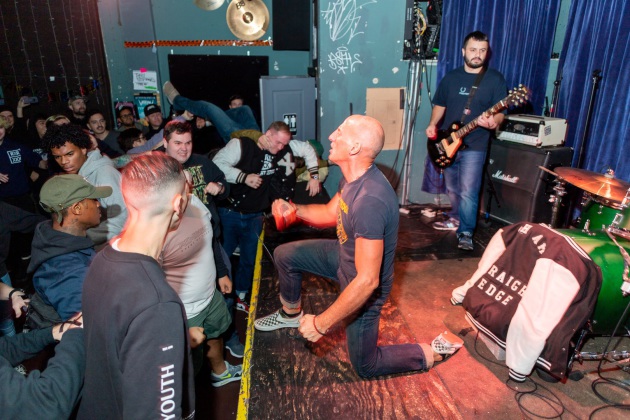 IE: You also played a show last year where you guys had Porcell from Youth Of Today/Judge/Project X come up and do a Project X cover with you guys, can you tell us how that came about?

Alexis: That was the Edge Day show in Brooklyn. Our friends Grant, Harry, and Tobi booked it. The lineup was us, Reaction, One Step Closer, Regulate, Down To Nothing, and Floorpunch. So our friend Tobi told us two months before the show that we should cover “Straight Edge Revenge” by Project X with Porcell. At first, we didn’t think much of it and didn’t think it would happen. Then he told us maybe two weeks before the show he was really gonna be there and would be down to do it and we learned the song. The day of the show we got to meet Porcell and he was super nice to us. Never would I have thought we had an opportunity to do that but I’m very thankful that I can say we did that.

IE: Can you guys run down the list of all the ties you all have to some of the other recently departed NJHC bands as well as real life family ties within the band?

Hubba: Avery and I are brothers and he played in Fence Cutter.

Matt: Yeah, so Avery and Hubba are brothers, and my older brother is Jason who sang for Fence Cutter. It’s basically little Fence Cutter. 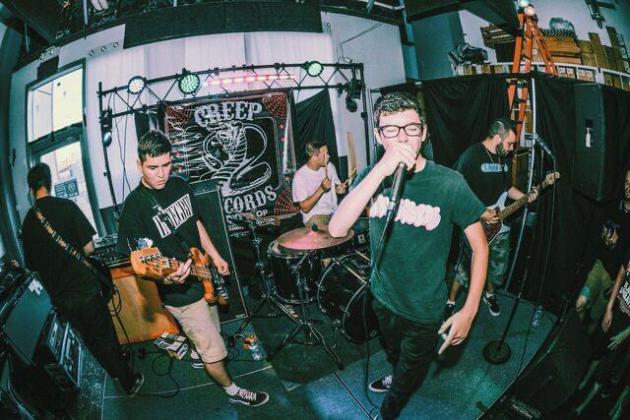 IE: With the majority of us anchored to our homes over the last few weeks what are some of the things out in the real world that you miss the most?

Hubba: Just shows and being able to hang out with everyone.

Matt: Definitely shows. I miss my friends and girlfriend a lot. Just normal life in general, it’s so weird right now. Thank God for skateboarding though.

IE: That’s it, anything else to add before we wrap this up?

Hubba: Thanks to Edgewood Records for putting our tape out.

Matt: Everyone go listen to Killing Me from Delaware, and Last Straw from Connecticut, two more brand new young bands doing cool shit. Expect more from Amboy Hardcore and the Jersey Slide Zine once this is over. Thanks for interviewing us, can’t wait for the In Effect book to come out.